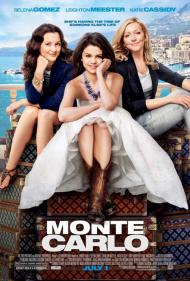 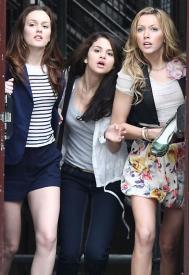 This "Prince and the Pauper" story is pure romantic fantasy and isn't without its charms. Its cast is certainly likable enough. As a forty-two year old man, I'm sure I wasn't its intended audience and yet even I found some things to enjoy in it. Sure, it's very lightweight and pure fluff, but it's not trying to be anything else. If that sounds like a cautious recommendation, it is. This is no classic, but it's no embarrassment either.

To celebrate graduating from high school, Grace (Gomez) takes a trip to Paris with her slightly older friend Emma. Also coming along, at the insistence of Grace's parents, is Meg, Grace's older step-sister. Emma is a bit free spirited while Meg is more serious, having never really recovered from the death of her mother. While at first the trip is a bit disappointing, when Grace is mistaken for socialite Cordelia Winthrop Scott, whom she just happens to look exactly like, the vacation turns into the trip of a lifetime as the three girls suddenly find themselves leading the life of luxury. But can they keep up the charade?

The story is a wishful fantasy aimed at young women. Cordelia's many suitcases and trunks are filled with designer clothes, shoes, makeup and jewelry and the girl's all get to play dress-up. Although thankfully the film avoids any kind of "fashion show" type scene. Each of the girl's meets a boy on the trip, with one of them even being a prince. There are some moments of innocent romance where the most that's shared is a kiss. It's a lightweight romance novel for girls.

There are no surprises in the plot. You'll be able to predict the end of every scene. This undercuts  whatever tension there might be, but when a movie is this light and fluffy, you're not really watching it for the intrigue. The plot also depends rather heavily on coincidence. Meg runs into her Australian boyfriend not twice, but three times. The first two times in Paris and the last in Monte Carlo, because you know, Europe is so small that you're always bumping into people you've just met.

Reportedly, the original script for this movie was about a group of women from New Jersey who went to Monaco and pretended to be heiresses and was going to star Nicole Kidman and Julia Roberts. It was decided to skew it younger before filming began so a rewrite and recasting were in order. I have to say the original sounds more entertaining, but that could have more to do with my age than anything else.

Okay, so this isn't a great movie, but everyone in it is so likeable and inoffensive that I find it difficult to dislike. Basically, this is one of those movies where you'll be able to tell if you'll like it based purely on the previews. But even if you're dragged along by someone else, it's just pleasant enough that you shouldn't be bored. 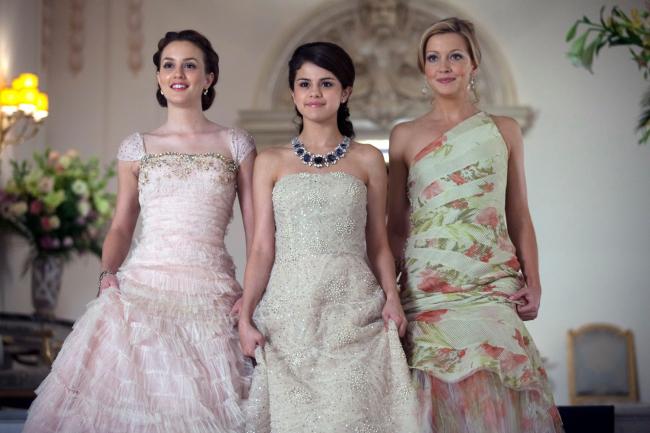 I am likewise not this film's target audience but even if I were, would I be able to forgive all of the wild coincidences and situations these three girls find themselves in? Cordelia is akin to Paris Hilton, when she was the top media whore. Paparazzi wait outside her hotels just to snap a picture of a girl who just happened to be born rich and made attractive by that money. As she is so famous, I wondered how Grace, Emma and Meg had never heard of her before and made the connection that Grace resembles her.

I will excuse that point, as maybe Cordelia is only recognizable in Europe, and thus outside the sphere of influence on these three average Texas girls, and by average I mean hot as Hollywood can make them average. As Scott explained, they all go to Paris, where Grace gets assumed to be Cordelia. Several ridiculous conveniences follow that allow the girls to stay in posh hotels and jet to the Mediterranean coast without anyone questioning them or making their luxurious vacation at all difficult.

Scott compared this to the old tale of the Prince and the Pauper and had this movie stayed truer to that, I would have better bought these shenanigans. Grace and Cordelia could have met in Paris where Cordelia complains to her that she can never go anywhere without photographers or scandal and how she would love Grace's freedom. They strike a deal to switch places and Grace and her friends find themselves on a jet to Monte Carlo while Cordelia slips off to do whatever. That would have covered the ridiculousness of it all, leaving Cordelia's Aunt as the heavy who thinks something is afoot with her suddenly pleasant niece.

The one aspect of the tale that I thought worked best was the three love stories, that Scott mentioned stayed in "G" rated territory. Emma has a boyfriend in Texas, whose only character trait is that he is in love with her. She is unsure if he is the one, wanting an adventure before "settling" for him. Emma's most telling moment comes when she is on a yacht with a prince and his friends, and she realizes that she relates more to the servants than the other guests.

Meg is stressed by the death of her mother and her father's recent marriage to Grace's mother. This arrangement has caused some hostility between her and Grace. But what does any uptight girl really need but to get laid by a free spirited guy who constantly forgets to button his shirt. Okay, it never says they have sex but they do spend the entire night together and he does ask her to go away with him. No man would do that unless he already knew what to expect in the sack. Just saying.

Grace's love story is the least interesting. Theo is forced, because of her family's money, to escort Cordelia while in Monte Carlo, whose rude reputation has proceeded her, making him none to excited about it. He, of course, does not know that he is actually taking out Grace and becomes joyously surprised to discover that "Cordelia" is much nicer than he expected. They supposedly bond over their passion project of helping Romanian children and a romantic evening spent grooming horses and watching fireworks. Their relationship is too stitcomish to truly invest in. "I finally meet a guy who likes me for me. And I'm not even me."

Monte Carlo is a completely harmless girly fairy tale. Look no further than the dress up scenes. Nearly every chick flick since Cinderella has had one. However, the writing could have sold some of the plot points so much better. The easier to buy princess/pauper angle should have been employed with the ending reveal scene caused by the Aunt learning the truth and an ornery Cordelia reappearing after discovering how inconvenient life is without privileges. Thus, she could have learned a lesson as well.