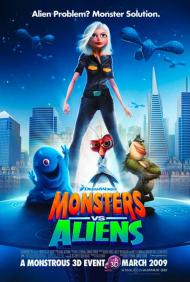 Monsters vs Aliens is a fun time at the movies. Although the theater had many children in it, the adults laughed just as much. Some jokes were aimed directly at kids. Seth Rogen’s gelatinous blob was easily their favorite, “She? It's a boy; look at his boobies!” Adults will pick up on the many science fiction film references like, Star Trek, Close Encounters of the Third Kind, Star Wars and An Inconvenient Truth.

Susan is just an ordinary girl about to get married, when a radioactive meteor lands on top of her, increasing her height. Think Attack of the 50 foot woman. The government captures her and throws her into a secret facility for odd creatures. There is B.O.B. the one eyed blob. Dr Cockroach is a take on The Fly, “I'm not a quack. I'm a mad scientist.” Missing Link is a variation on The Creature From the Black Lagoon. When an alien attacks Earth, the monsters are let out to defend our planet.

Susan, now renamed Ginorma, runs from a giant alien robot through downtown San Fransisco, destroying numerous buildings. She ends up using two cars as rollerskates. It reminded me of a scene from Transformers. The robot catches up to her on The Golden Gate Bridge where Susan learns she is strong as well as tall.

The entire cast is great, including the supporting cast. Rudd has proven to be one of my favorite comedic actors of late. Here he plays Susan’s newsman fiancé, who has dreams of network fame. Colbert has a couple of funny lines as The President. My favorite is when he yells, “Do something violent!” to his generals. Rogen though, steals the show. His indestructible dimwit gets the most laughs, “I may not have a brain, but I have an idea.”

The movie has everything going for it. The action and jokes are plentiful. My fifteen year old liked it, and he has been avoiding animation, outside of Adult Swim, for a couple of years now. It references other films without announcing them. My one and only complaint about the movie is that Susan’s future seems odd at best. A fifty foot woman has few prospects outside of decorating the Christmas tree in Rockefeller Center. 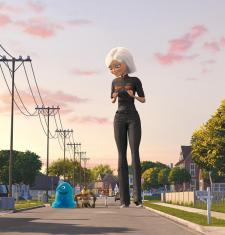 Great characters in a laugh-out-loud comedy. What more do you need.

Rarely have I found myself so completely in agreement with you Eric. Not that we don't agree quite a bit, but I've reread your review of this movie a couple of times trying to find some point you might have got wrong, but I just can't find one. This is a great and funny animated movie.

One movie it references that you didn't mention was Dr. Strangelove. The war room here is very similar to the war room in that movie. One of my favorite jokes takes place there when General W.R. Monger (War Monger) shows the monsters one at a time on a screen and the same tea lady screams and drops her tray each time one is shown (Rereading that I realize it might not sound that funny, but if you see it, you will laugh).

Rogen does get the funniest lines as Bob. Normally I don't really care for him, but playing a brainless gelatinous blob seems to come naturally to him. I'll never be able to hear the name Susan again without hearing him say "Suuuuuussssaaaannnn" in a spooky voice. He gets another great line when he says, "I think that Jello gave me a fake phone number."

Pixar makes great animated movies, but sometimes they seem to take themselves too seriously. Take Wall-E for an example. He's a great character and there's some very funny moments, but the story is burdened with a message. Monsters vs Aliens is simply trying to entertain, which makes it lighter and more fun. Sure, the animation isn't quite as good as Wall-E, but if all you want to do is be entertained then Monsters vs Aliens is a better bet.

What do you do if you're a 50-foot tall woman? I think they should make a sequel so we can find out. 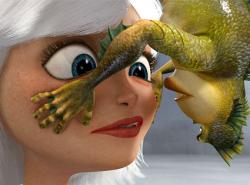 I much preferred Wall-E to this movie. Sure it is fast-paced and contains many funny one-liners but its plot is extremely simple and fairly unoriginal; a group of misfits learn to band together to defeat an alien threat and thereby proving their worth to the outside world. Pixar movies rely too heavily on clichés and pop cultural references and Monsters vs. Aliens is no exception.

I do agree that the voice-over work is very well done. Rogen does indeed steal the show as B.O.B. but Witherspoon also gets to deliver some cleverly humorous lines as Susan. Her reaction to waking up in the secret government monster prison is priceless. “Oh God, please tell me none of this is real. Please tell me I had a nervous breakdown at my wedding and I'm in a mental hospital and I'm on medication that's giving me hallucinations.”

The jokes get spread around. Susan’s mother nonchalantly tells her, “Ever since you were a little baby, I knew... you know, that you would save the world from an invasion from outer space.”

The scene I laughed hardest at was when Susan, aka Ginormica, is in prison and being followed by helicopters. She pleads with her captors, “But I'm not a monster! I'm just a regular person. I'm not a danger to anyone or anything!” She then accidentally strikes a helicopter causing it to crash while the pilot screams, “Don't let her get me!”

Monsters vs. Aliens is little more than a series of one liners, which in my opinion can only sustain a feature length movie if you have Groucho Marx or Bob Hope in the lead. Yes I was amused but the talents at DreamWorks Animation have grown entirely too clever for their own good and I can’t imagine ever wanting to watch this movie again.