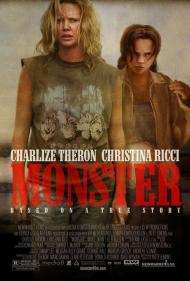 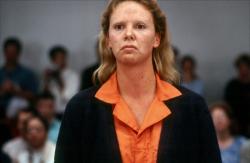 To me, the movie Monster is a contradiction. It contains an ugly story about some very ugly and vile people for whom I can feel no sympathy, and yet it contains one of the most powerful acting performances that I have ever seen. I did not enjoy this movie and I would never watch it again, and yet because of the intense acting by Charlize Theron, who transformed herself for this role, I'm afraid that I will never be able to forget it.

The movie is based upon the story of Aileen Wuornos, the female serial killer, who was put to death in 2002, for the murder of eight men in the late 1980's. It focuses on her pseudo-lesbian relationship with Selby Wall (Christina Ricci) and the events surrounding her string of murders. The reason I say pseudo, is that Aileen is not gay, but just desperate for companionship, and basically leads Selby on so that she will stay with her.

I have always despised movies, books, or television specials that talk about Serial Killers. It is such a dark and twisted subject, and I am repulsed by those who say they want to get into the mind of these people. Too often, as is the case in this movie, part of the blame for their killing sprees is placed upon society. Aileen was abused and had a very rough childhood it is stated in this movie, and I don't disbelieve it, but to even slightly imply that such a childhood could cause mitigating circumstances to her murders is more than I can stand.

There is one thing and one thing only that makes this movie so unforgettable and that is Charlize Theron. Not since De Niro in Raging Bull has an actor so physically changed themselves for a part in a movie. Not only did the normally rail thin Theron gain 30 pounds (and isn't afraid to show it off), but she wears prosthetic teeth, and skin make-up that makes her nearly unrecognizable as one of the most beautiful women in the world.

But the change in appearance is merely window dressing for her performance. From the moment the movie begins, Charlize is Aileen Wuornos. Her mannerisms, her speech patterns, are so disturbingly accurate that she truly brings this woman to life. It is one of the greatest acting jobs of recent years, one that is so true and so real, that you really do have to see it to believe it. And the fact that it comes from an actress whose last movie was The Italian Job opposite Mark Wahlberg, makes it even more surprising.

In the end, maybe that is what I found so disturbing about this movie. When I think of someone capable of murdering a string of people in cold blood, I want to think of them as a Monster and not an actual human being. And that is what Charlize Theron does in this movie; she makes a human being out of a Monster. Here is the Best Performance by an Actress in 2003, whether the Academy gets around to giving it to her or not. 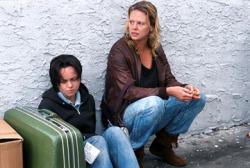 Unlike Scott I was able to feel some sympathy for Aileen Wuornos - as portrayed in this movie anyway - but only up to a certain point. The first murder they show her commit was certainly not in cold blood. She had been beaten, tied up and sodomized by a brutal john she had picked up and was about to be raped again. I consider this justifiable homicide. It is only later that I lost any and all compassion for her as she descends further into violence. But even then the script and lead performance are so perfectly wrought that you are forced to see the world from her point of view and understand how she – in her own very unstable mind - is therefore able to justify her behavior. For as fucked up as she was she differed from male serial killers in one very important way. She murdered for money and to survive, it was never about the thrill of the hunt that drives most male psychopaths.

I thought perhaps at first that Scott was exaggerating the excellence of the performance by Charlize Theron. He was not. Give her the Best Actress statuette now. This is easily the most gut wrenching and absolutely complete performance I have seen in years. It is similar in some ways to Hilary Swank's performance in Boys Don't Cry. In both cases beautiful actresses drastically changed their appearance and mannerisms in brutally graphic movies. The one difference being that Hilary played the victim and Charlize is anything but.

No this is not an easy movie to watch, it is dark and disturbing. But that doesn't detract from its greatness. This is a well-crafted, realistic and brilliantly acted piece of celluloid. Unfortunately the subject matter will most likely keep it from getting the recognition it deserves. 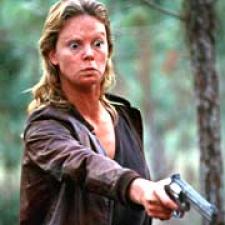 Aileen Wuornos killed 8 men who wanted to have sex with her. I am surprised she could find that many.

Theron so uglies herself up to become Aileen Wuornos, that I wondered how she made a living as a woman who sells herself for sex. Seriously, who would want, let alone pay, to have sex with such an unappealing, slightly masculine woman?

Wuornos's relationship with Selby is not pseudo. I do not know what her sexual preference was, but she obviously loved Selby. She kills so they may have a future together. She was definitely into the gay sex. The movie is very clear on that.

In Monster, I felt I was watching a damaged human being. She had a screwed up, abusive life. The one thing she had was a vagina and grew up thinking that was her entire worth. She never learned to become anything more, until she started to kill. She was getting back at men from her past by killing men in her present. Make no mistake about it Patrick, she got some satisfaction out of the killings. She shot some of these men many times. She took them into the woods with premeditated murder on her mind.

I once had a teacher tell me that she did not like the term "spoiled," in reference to children who were given everything they wanted, turning them into impolite adults. She said that kids who do not get any love or attention are spoiled as well. Aileen Wuornos was definitely some spoiled goods. As a child she was given sexual attention and abuse. Thus helping her to become a prostitute, a killer, and quite simply, a monster.