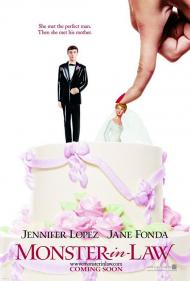 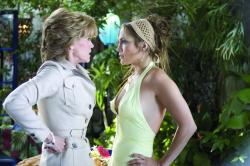 Monster In-Law is Meet the Parents with the sexes reversed and without the humor. Instead of Robert De Niro playing the menacing in-law, you've got another film legend, Jane Fonda, playing her first big screen role in many years as the mother in-law who doesn't exactly welcome her prospective daughter in-law to her bosom with open arms.

Fonda plays Viola, a Barbara Walters type newscaster who has a nervous breakdown when she is fired from her job. Her life doesn't get any brighter when she learns that the light of her life, her son, Dr. Kevin Fields (Vartan) is engaged to 'Temp' worker Charlie (Lopez). She decides to take his pending marriage as a personal insult and to use all of her motherly powers to break up the happy couple.

The problem with the movie is its timidity. If the writers had been braver, Viola could have been a true 'monster' in-law and been a full-fledged snobbish racist bitch. Instead, despite being rich, successful and powerful, she simply comes off as a petulant child used to getting her own way. You can't help but feel that if Charlie stood up to her at the beginning and yelled her down, the problem of their relationship would have been solved long before it is here. Only by the end of the film when Charlie finally does fight back does the movie gain any kind of spark. Watching Lopez and Fonda go toe-to-toe is the best part of the movie, there's just too little too late to pep up the story.

Vartan is completely bland as the love interest whose only purpose in the movie is to get Lopez and Fonda into the same room together. A marionette in a tux could easily have filled his role. Wanda Sykes, as Viola's long-suffering assistant is one of two supporting characters that actually holds her own in the movie. The other is Elaine Stritch with her cameo appearance at the film's climax. Among the other supporting parts is the increasingly clichéd gay best friend/neighbor.

Jokes at a mother in-law's expense have long been a comedy staple. You'd think it would still be a rich comedy vein to mine. Unfortunately, you'd never know it by watching this film. A part from the fact that this is Fonda's return to movies, it holds nothing special at all. And if this is the best role she could find right now, you might wish she'd waited a little longer to make her return. 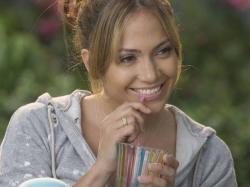 Scott's right. The movie never takes it's subject far enough. The sitcom situations are predictable and never as outrageous as they should have been. Fonda and Lopez are all huff and puff but they never blow the house down. Wanda Sykes, in a supporting role, steals the entire movie from them with one-liners like, "I think you dislocated my vagina." If a supporting character gets all of the laughs then the movie might as well have been all about her.

The weakest aspect of the entire film is the relationship between Kevin and his mother, Viola. They, supposedly, have this really close bond. If that is so, then how come she spent months in rehab without hearing from him? If they are close then he should, know doubt, know what a controlling, manipulative beast she can be. Kevin, who is a doctor, is either completely stupid or a mama's boy. Either way, there should have been at least one scene where he tells Viola to cut it out.

Luketic keeps the movie moving along but never mines it for all it's worth. In an early scene he makes reference to his previous comedy Legally Blonde. In that movie the main character is an exaggeration of an air head. In Monster In-Law, Fonda's character is never exaggerated enough, and in the process the movie loses ample opportunity for more jokes. 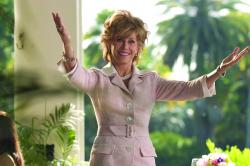 The problem definitely lies with the script. As Eric said the humor is pure sitcom, as in predictable jokes, plenty of slapstick, and too few genuine glimpses at wit. The characters are always one-dimensional and often bland. At the end when they go for the heartstrings it doesn't ring true because Viola and Charlie are more cardboard than flesh and blood.

Jane Fonda gives it her all, that's for sure, and she looks fabulous. She has the vitality of a woman half her age. She seems to be having fun playing Auntie Mame's evil twin.

Lopez is unique. I admire her determination and ambition. She has presence and is beautiful and sweet but doesn't have a clue how to deliver many of the comic lines here. Wanda Sykes knows how. And Elaine Stritch's cameo is priceless.

A great set-up but the script sucks.