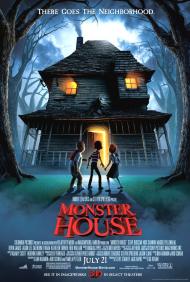 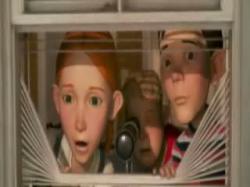 Monster House wants to be a classic.

Monster House tries very, very hard to be a Halloween classic. Its setting is a orange leafed covered neighborhood. It takes place on Halloween, and it has a big ugly haunted house that fascinates a neighbor boy, DJ.

DJ is at that awkward age. He still wants to go trick or treating and he still cherishes his toys but he is interested in girls and thinks of himself as a grown up. He also happens to live right across the street from said haunted house, which he keeps a close eye on. With the help of his best friend and a girl selling candy door to door, he sets out to solve the riddle of the scary house.

The house attacks everyone and anyone who even steps on the lawn or sidewalk to the front door. After the kids get attacked by the house they call the police who, as expected, do not believe them. That is until they themselves get eaten by it.

The movie starts out very engaging but then it breaks its own rules and it falls to pieces. Early on, it is established that the house is only concerned with its own property and its tongue/carpet can not reach past the property line. At the end of the movie, however, the entire house uses trees and walks. What started as a low key comedy/horror movie ends with an explosion and an unimaginative over the top action sequence.

As a father I was a little disturbed by this movie. It takes place in that movie world where parents are superfluous creatures who are only around to annoy their kids. The mom has to remind the dad to tell DJ that he loves him when they leave. Her goodbye is, "We'll be back tomorrow night. Oh, if anything happens, call the police and hide in your closet." When they come back, they find him and his best friend covered in dirt. The uncaring mother just guesses that it is part of some costume.

Monster House could have gone on to become a movie worth watching every Halloween had it kept the story as simple as possible. Think Toy Story. Most of it takes place in two neighboring houses where the big action sequence involves a moving van and a remote control car. Monster House ends with a kid driving demolition equipment while another is swinging from a giant crane with sticks of dynamite, not to mention the walking house that eats people. Less, in this case, would have been so much more.