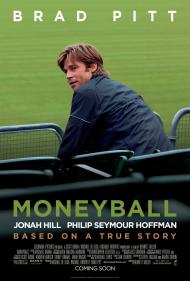 Any fan of baseball is at least peripherally aware of the idea of moneyball. The idea of using specific and often unglamorous statistics, such as on-base percentage,  to measure the worth of a player instead of gut instinct and glory stats like home runs. It was made famous when a nonfiction book by that title was published in 2003 detailing the story of the Oakland Athletics and their General Manager Billy Beane and his successful use of statistics to put together a winning team on a limited budget. While the use of math to put together a baseball team might sound like a pretty dry idea for a movie, the makers of this one actually do a really good job of keeping it interesting and deliver a decent sports movie that gives Brad Pitt a chance to shine in the lead role.

The movie starts with the Oakland As' loss in the 2001 American League Division Series to the New York Yankees. Following the season the As lose several of their key players, including Johnny Damon to the Boston Red Sox and Jason Giambi to the New York Yankees. As' General Manager Billy Beane (Pitt) is forced to rebuild his team, but is constrained by the lowest payroll in baseball. With the help of statistician and recent Yale economics graduate, Peter Brand (Hill), Beane assembles his team based purely on statistics. The traditionalists scoff at his tactics and Beane is forced to fire his head scout who strongly disagrees with this approach. The media has a field day with him and the team when they start the season on a losing streak and even the As' manager is working against him. The final result of that season is in the record books, but in case you're not familiar, I won't spoil it here.

To balance all of the baseball stats and jargon, the script provides plenty of humor. The reaction of the older members of the Oakland staff to the new method of recruiting players is worth a few laughs. A more restrained than normal Jonah Hill is also quite funny as the nervous new guy.

Pitt is good in the lead role. It's a part that plays to his strengths. His Beane is fast talking and charming. At 48, Pitt still looks good, but his age has given him an added gravitas that gives him a greater aura of authority than he's had in the past. He's also still in good enough shape to believably have been an athlete in his youth.

A lot of sports movies are played as metaphors, but this movie is more literal than that. It's really the story of how the game has changed rather than about something like not letting life beat you. The As are the underdog as the season progresses in the movie and you will find yourself cheering them on, but really you're cheering for Beane to be proven right rather than because you care so much for the team. Because of this the movie has a hard time finding its climax. Most sports movies end on the final game of the season, but this one continues past that for an epilogue, because the real climax is seeing if the game will change because of Billy. It makes for a satisfying ending, but not an emotional one, which is perhaps fitting because the whole point of moneyball is to take the emotion out of putting together a baseball team.

Although it doesn't really affect the drama of the movie, the story is a little misleading. The script briefly mentions the idea of sabremetrics, upon which the idea of moneyball is based, but apart from that one sound bite, it makes it seem as if Beane and Brand invented the idea and were the only baseball front office using it. In fact, Beane's predecessor with Oakland, Sandy Alderson, was an advocate of the system and used its principles as far back as 1995. Hell, Earnshaw Cook published a book titled Percentage Baseball way back in 1964, so the idea isn't as new or as radical as this movie would have you believe.

I don't think you'll have to be a baseball fan to enjoy this movie, but it will certainly help. The drama and humor are good on their own, but some knowledge of the game and personalities will definitely help you pick up on all the nuances of the story. 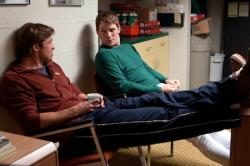 Scott, I agree that Moneyball is far more entertaining than the subject matter initially suggests.  However, I disagree that this is not a sports movies as a metaphor.   By the end of the film Beane is weighing a decision between taking a huge salary and moving across the country, or staying in California, closer to his daughter.   As the movie showed, there is more than one way of looking at something.  This message is made clear with the video clip Hill shows Pitt, near the end.  His decision seems like an easy one to us on the outside.  But like the decision he made with the team, he takes the unexpected route.  Sure, this story shows how the game has changed but it is also a metaphor for life.  Sometimes the expected way is not always the better way.

I have never been a huge Pitt fan.  Often I think of him more as tabloid fodder than an actor.  He is constantly reported as being in some other country, for what ever reason.  He seems to spend so much time out side the United States that he could almost be considered an expatriot.   With that in mind, I was not sure how he would work in a film dealing with something so American as baseball.    To my surprise he pulls it off, making this my favorite dramatic role of his.

Although Pitt is the star as it is Beane's story, I was interested in the sub plot of Scott Hatteberg.  He was given a second chance at a baseball career and spends much of the movie unsure of himself.  Even if you do not know the real story, you know that Beane will be alright.  Hatteberg is a married man with a daughter who has to overcome his insecurities.  In the movie I liked Beane, but I rooted for Hatteberg.

Early in the movie there is a scene where Pitt walks from the concourse to the bleachers, with the stadium baseball field below.  It made me remember my first time.  It was Tiger Stadium in Detroit.  It is no longer there, but the memory of seeing the field for the first time will stay with me until I die.  I imagine most true baseball fans have similar feelings about their first time.  Like the movie says, you cannot help but be romantic about baseball.

Brad Pitt and a baseball field in Moneyball.

I’m not the baseball aficionado either of my brothers is, so it’s no surprise I didn’t enjoy Moneyball quite as much as they did. While it does manage to make the subject matter fairly compelling it runs a bit long and needed a tighter edit. I agree Brad Pitt (continuing his career emulation of Robert Redford) is very good as Billy Beane. All I’ll say about Jonah Hill’s one-note performance as Peter Brand is Albert Brooks was robbed of an Oscar nomination.

One thing that sets Moneyball apart from most sports movies is the fact that it features actual people and players rather than fictionalized characters. This veracity adds to the drama.

I was unaware of the Oakland A’s historic 20 game win streak. The manner in which their record breaking win unfolds couldn’t have been fabricated in a more dramatic fashion than the way it actually happened. To be up 11 to 0 only to have the opposing team tie the game before the clutch winning homerun in the bottom of the ninth is incredible. But, as Scott pointed out, the story lingers long after what should have been the climactic final scene.

The focus should have been on the players rather than all the behind the scenes meetings, which drag a bit and have a sameness to them after awhile. The story of this underdog team’s miraculous season has enough drama and a much bigger emotional payoff than waiting for Beane’s career decision. In the long run their win streak will be remembered longer than whichever team won the World Series in 2002.

This is still an entertaining movie but it could have been a 4 star classic. And while I’m not a big fan of the sport I do appreciate the inherent romance in baseball. It’s just too bad Moneyball never takes full advantage of this ineffable characteristic of the game.