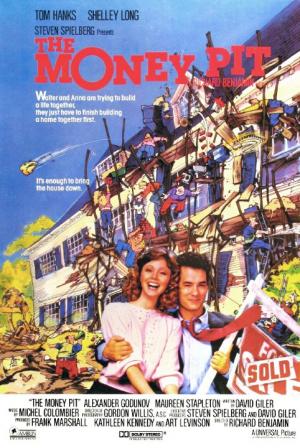 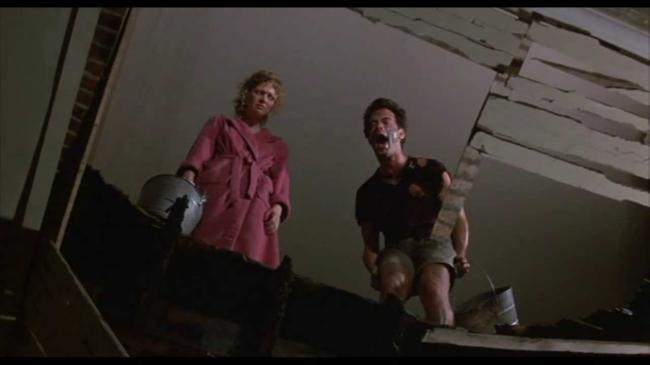 Shelley Long and Tom Hanks in The Money Pit.

The Money Pit marked the first collaboration between Tom Hanks and Steven Spielberg. Spielberg executive produced the movie, which is a loose remake of the 1948 Cary Grant/Myrna Loy classic Mr. Blandings Builds His Dream House. Walter (Hanks) and Anna (Shelley Long) are a couple who buy an old mansion on the cheap only to discover it needs extensive work. It's in such bad shape, in fact, that Walter soon dubs it a “money pit”.

Here are just some of the problems with the house: the front door frame falls out, the main staircase crumbles, a chimney collapses, the electrical wiring catches fire, the plumbing is filled with disgusting gunk, a bathtub falls through the floor (causing Hanks to laugh maniacally (see photo)), and there's even a raccoon living in the dumbwaiter. The only construction crew that will take on the job rips the place apart and every time they are asked how long the work will take to complete, they give the same answer, “two weeks”.

Hanks and Long have decent chemistry together, although she looks a bit too old for her baby-faced costar. Anna's a classical musician who was previously married to an arrogant conductor (Alexander Godunov). Her relationship with her ex leads to the movie's biggest conflict, which is of course happily resolved at the end.

Maureen Stapleton steals her few scenes as the woman who sells them the mansion. She shows them the house at night by candlelight to save money for, “Those goddamned bloodsucking lawyers!” She also reveals that Carlos, her boyfriend of 25 years, was actually Hitler's pool man and is now on the lam, which is why she has to sell the house in such a hurry. Walter and Anna buy her story and her mansion and before you can say, “Mr. Blandings Builds His Dream House” they begin to discover all the many problems with their new abode.

In the mid-80s Tom Hanks and Shelley Long were both former television stars attempting to transition to the big screen. Tom Hanks would, of course, go on to have a legendary Oscar winning career (both with and without Steven Spielberg) while Shelley Long would have a few minor hits like Outrageous Fortune (1987), Troop Beverly Hills (1989) and The Brady Bunch movies in the mid-90s before quietly returning to the small screen in mostly supporting roles. The Money Pit isn't as good as Mr. Blandings but it does offer some nice lighthearted humor and clever physical sight gags. And with a brisk 90 minute run time it never overstays its welcome. 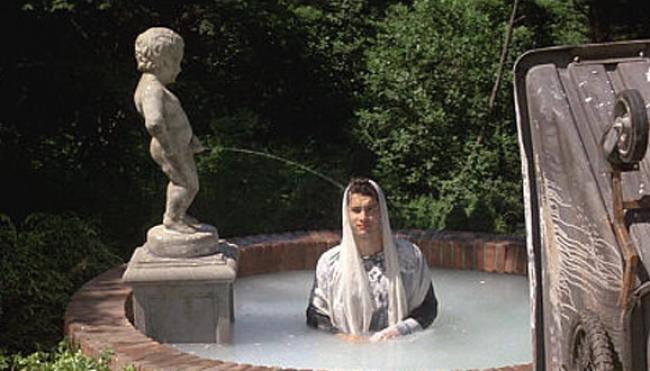 Tom Hanks in The Money Pit

I agree. The Money Pit is a pleasant enough dated little comedy. Patrick mentioned its two stars while several other aspects speak of its time period. The construction crew first arrives at their home looking like a biker gang from the original Mad Max films. One member of the crew is played by Jake Steinfeld. If you were old enough at the time you will remember him from his "Body by Jake" fitness programs and commercials. If you are too young to know him, just think of him as Hailee Steinfeld's uncle.

As a home owner who has had to make repairs, I was none to anxious to watch a film about the stress of home owning. The Money Pit is however, hardly going for realism, so it never becomes too much. In fact, it starts out with Walter and Anna going into serious debt to buy the home, then they go on and on about how much it will cost to fix it all up. Judging by the final results, they may as well have razed the home and simply built a new one. The final bill for it all and where this bankrupt couple got the funds to do it all is conveniently never revealed.

That kind of bugged me but the real misstep in the story is Anna's affair with Max. Walter suspects that she has slept with him and asks her to tell him the truth, stating he will not get upset. She eventually does and he gets upset. It is the normal reaction but Anna then acts like the victim because Walter got mad when he said he would not. Although it all works out in the end, it is a huge black mark against her for acting the way she does. "How dare you get mad at me for being honest about being unfaithful!"

Stapleton does indeed steal her two scenes. I laughed hardest when she explained her boyfriend's problem, "You think you know somebody after 25 years. And then one day, Israeli Intelligence comes to the door." Unfortunately, the rest of the film is not quite as funny. What is intended as jokes is the construction workers watching Walter and Anna having sex and lots of slap stick. My favorite physical joke being when the stairs collapse and Hanks jumps to the landing. Long comes running to find him hanging over the edge. Hanks looks up at her and says ever so politely, "Honey, you're standing on my fingers." The most memorable line in the film is when a depressed Walter comes home to the mess and says, " Ahh, home crap home!"

Patrick mentioned that Hanks and Long were television stars, which is apt as The Money Pit has enough decent material for a half hour sitcom. As a feature length film the most it has going for it is the presence of a future superstar. 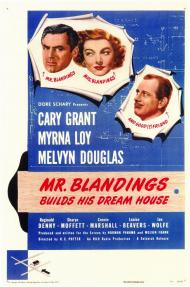