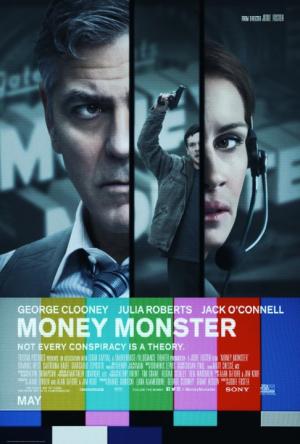 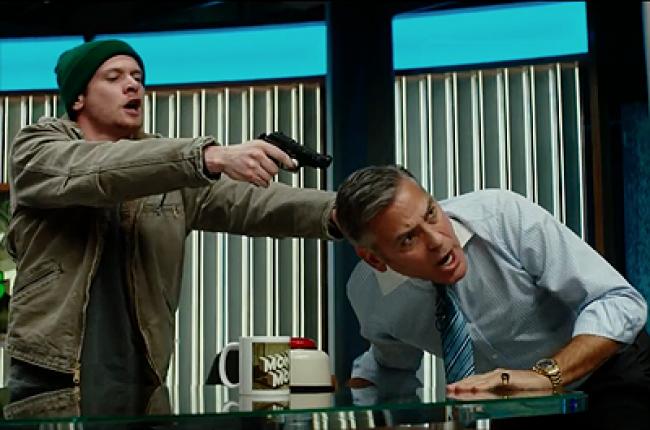 Although they seem rarer these days, Hollywood still regularly churns out "issue" movies. Those being movies that are meant to not only entertain, but to also educate or elucidate, but which usually end up with audiences listening to some Hollywood hack pontificate on some subject or other, as if they were in touch with the real world. Once in a great while, Hollywood creates one that actually manages to entertain and inform, but that's pretty rare. Last year's The Big Short was one such movie. It managed to say something about the recent financial crisis in a humorous manner. Money Monster, however, which deals with a similar topic, is a complete failure on the issue, but does manage to mildly entertain during some tense hostage moments.

George Clooney and Julia Roberts star, although they only appear together in one scene. For the rest of the movie,Clooney's in front of the camera as Lee Gates, the host of a television show where he dispenses the financial advice equivalent of fast food. Roberts plays Patty, his producer. She speaks to him through his earpiece ala Holly Hunter and William Hurt in Broadcast News (although I am in no way comparing this movie to that classic). The film takes place in real time over the course of one afternoon. During one of Lee's typical broadcasts they receive an unexpected visitor in the form of a disgruntled investor who followed one of Lee's stock tips and lost his life's savings.  He's come to the studio with a gun and a bomb packed into a vest that he has Lee put on live on the air and he threatens to detonate the bomb if the studio stops broadcasting.

For awhile this simple setup is enough to carry the movie along. The tension builds quickly as the police swarm the building, learn about who the bomber is, and try to come up with a plan that doesn't end with the bomb going of. However, after this initial setup, the movie goes straight into cliches 101. There's no subtlety in the script and the ending will be obvious from the beginning to anyone who has ever seen a Hollywood movie. It doesn't even get to its cliched ending in any sort of original or interesting way.

One of the script's biggest problems is that the character of Kyle, the bomber, is such an idiot that A. it's hard to believe he was able to mastermind his plan to take over the studio, and B. it's hard to work up much sympathy for him. Clooney's Lee Gates is such an obvious showman and huckster that anyone dumb enough to invest all of their money into just one stock that Lee recommended is so idiotic as to probably qualify as mentally disabled. The film's funniest scene comes when the bomber's girlfriend, who the police have brought in to reason with him, instead tells him live on the air exactly what an idiot he is. This is a problem for the script because the movie wants you to be on his side and against the evil CEO. Which is the film's other problem in that the CEO (Dominic West) is a cartoon cutout of a greedy capitalist.

Both Clooney and Roberts have genuine star power, but it's wasted here. Clooney uses his natural charm to good effect, but Roberts seems almost bored at times. With a tighter script, more concerned about the action and less on conveying some very weak and watered down message, I believe you could make an entertaining movie out of this story.  However, director Jodie Foster and writers Jamie Linden, Alan DFiore, and Jim Kouf waste whatever opportunity they started with.