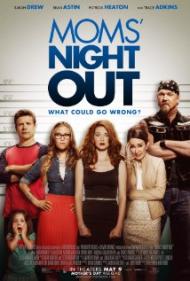 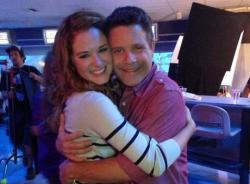 Sarah Drew and Sean Astin in Mom's Night Out

Birmingham, AL natives Jon and Andrew Erwin are a directing/writing brother team who develop and produce stories of faith. They started as camera men on sports channels but have moved onto making their own feature films. Mom’s Night Out is their second movie. It has some nice moments but the brother’s lack of experience is obvious.

Sarah Drew and Sean Astin play married couple Allyson and Sean. They have three children that she homeschools while his job often takes him away from home. She stresses to the point that she nearly has a nervous breakdown. She tells Sean at one point that although she is living her dream as a mother and wife, she is still not happy. With Sean’s encouragement, Allyson decides to have a night out with two other mothers.

Their night starts slow with a rant at a new age restaurant where the hostess speaks of auras and journeys. Things start to get weird when the women run into Sean’s sister and she realizes she has no clue where her baby is. The night builds to a car chase, a hilarious visit to a tattoo parlor and eventually most of the moms getting arrested.

Although the idea is to feel sympathy for Allyson, I was not entirely on her side. At one point she is running late to church when her daughter asks to apply her mother’s makeup for her. Allyson says no but gives in when her daughter screams to get her way. Parenting 101, you do not reward bad behavior.

Sean spends time away from home for work and his Saturday nights playing video games online with an old friend. That alone earns Allyson a night out away from the children. This script beats the point to death with Allyson constantly whining about being unhappy until she hides in a closet with her laptop to find peace.

The flow of the film is very uneven. One minute we have a silly moment of a mother getting accidentally tasered and in the next we have a heartfelt conversation about mothers and faith in God. Some conversations stop the film cold. A more professional editor was definitely needed.

The Erwin’s are clearly conservatives and some of their points are refreshingly unique in contemporary films. At one point a British cab driver tells an apparent lay about stoner that people like him are the reason the American economy is in bad shape. These amateur film making brothers can certainly have a future in film making but they need to polish their craft and smooth some rough edges.