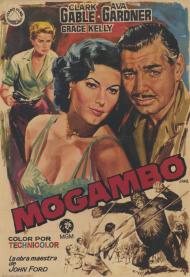 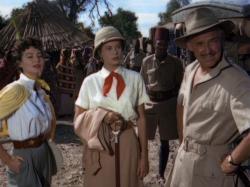 Mogambo is director John Ford's answer to The African Queen. Like John Huston two years earlier, Ford shot most of his movie on location in Africa. Instead of Bogart he hired Gable as his leading man. And Gable being Gable he had to bring two female costars along, Ava Gardner and Grace Kelly. Both movies make good use of the beauty and ruggedness of the African landscape, both movies have a central love story within a larger adventure, and both movies have lots of shots of wild animals. As with most movies from that era it is obvious which scenes were shot on location and which ones on a set. And in one particular scene in Mogambo it is clear that the director mixed footage of gorillas living in the wild with shots of trained gorillas on a set. Still the overall effect works if only because these larger than life movie stars cause you to accept the reality of their world.

Mogambo, a remake of Gable's 1932 classic Red Dust, has a great set-up. First Gable's tough old hunter meets Ava's brash show girl taking an outdoor shower in the backyard of his bungalow. She isn't the least bit embarrassed or shy about being caught stark-naked by a strange man with only some strategically placed bamboo between them. There is an instant attraction between the two and they have several flirtatious moments during the next few scenes. Then the other woman enters the picture. She is the polar opposite of Gardner. And though she is married (to a stuffed shirt anthropologist) Gable is immediately smitten by her prim, ladylike demeanor and helplessness. In fact he has to rescue her from the elements within 24 hours of her arrival. Both women are soon in love with the handsome rugged hunter, but will he choose the good girl or the girl with the reputation?

Some of the movie's best moments occur between the two women. Physically Grace Kelly was a petite, rail-thin blonde. All of these traits seem exaggerated when she shares the screen with the statuesque, full-figured, raven haired Gardner. When they head out on safari Grace Kelly keeps saying things like. 'Look at the lovely animals. Aren't they exquisite?' While Ava Gardner rolls her eyes in disgust. Another time Ava refers to Grace as 'Miss Louisa May Alcott'.

The second half of the movie is bogged down a bit by a few too many shots of wild gorillas. And in the action/adventure category Mogambo is not in the same league as African Queen. When the shift is away from the love triangle, the movie suffers. Still there is more than enough star power on display to make up for this.

Mogambo is probably Gable's most entertaining movie of the period. And though he was on the far side of fifty, his looks and charm are still intact and it is easy to see why these two beautiful women want him. But to find out which one he ends up with you'll have to watch the movie for yourself. 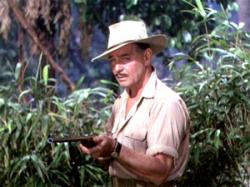 Actually Patrick, Ava Gardner is just as thin as Grace Kelly. Gardner plays her role big and brassy and thus appears to be larger than she is. Gardner steals the movie from both Clark Gable and Grace Kelly. She has most of the great lines. In one scene she tells Gable that Kelly's husband has the right to shoot him and put his head above his mantel. "Your big ears stuck out like an elephant about to charge." She jokes, referencing Gables most famous feature.

Mogambo is a star driven movie. However, Gable and Kelly generate zero chemistry. He and Gardner on the other hand are perfect together. In the 1930's, Gable was paired more than once with Jean Harlow. Harlow usually played a girl of questionable morality. Just the kind of woman Gable's cocky charm works so well with. Here, Gardner and Gable work very well together for the same reason. One of the final scenes has Gable, Gardner and Kelly sharing the screen. This scene best demonstrates that Grace Kelly was, at least in this movie, way out of her league. She is both dull and out of place. The love scenes she shares with Gable are unconvincing. Gardner, on the other hand, seems a natural fit for Gable.

Although not as exciting as The African Queen, Mogambo is still worth watching for it's equaly famous cast doing, then, rare on location filming. 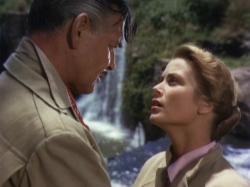 Being such a fan of Red Dust, and Harlow in particular, I expected to be disappointed in this remake. It may have been in part because of this lowered expectation, but I was surprised by just how much I enjoyed this version anyway. Sure, it doesn't quite live up to the original, but it's still very entertaining.

Eric, Gardner may have been thin around the waist, but it's easy to see what Patrick means when you compare her curves and Kelly's. Or rather, when you don't compare them, because there is no comparison. Gardner has them and Kelly doesn't. They're both beautiful, but in different ways. It's easy to see why Gable would have a hard time choosing between them.

The scenes filmed on location are very well done, but they also slow down the pacing of the story. Mogambo takes 115 minutes to tell the same story that Red Dust did in just 83. As good as the location scenery and filming was, it's the central trio that make this movie worth watching and during the last quarter of the movie, too much time is spent on the gorilla safari rather than the love triangle. Gardner's part is greatly reduced during this portion and the movie suffers for it.

One of my complaints about Red Dust was that I didn't see what Gable found appealing about Mary Astor's character. While still obviously a better fit with Gardner, here at least I could see what Gable sees in Kelly. I don't mean that as insult to Astor, who was a fine actress, but the way Kelly's character is written and played here, it's obvious that Gable sees her as someone who's not only beautiful and refined, but also someone who needs him in a way that Gardner's character never will. And I disagree with you Eric that Gable shares no chemistry with Kelly. Their shared moment on the porch when he rips the scarf off of her head is ripe with sexual tension. Both Kelly and Gardner were nominated for Oscars for their performances.

I always enjoy reading trivia about these old movies and one odd note that I came across while researching this one was that in Spain, the censors didn't approve of the apparent adultery that Kelly's character was willing to engage in so when they dubbed the movie they changed the dialogue to make her character  and Donald Sinden's character into brother and sister instead of husband and wife. However, they apparently didn't change the fact that the two were still sharing a double bed. And I can't imagine what they made of the scene later in the story when the "brother" wants his "sister" to go to bed with him.

If forced to chose, I would still pick Red Dust as the superior film, but fortunately there's no need. You can enjoy both and see that Gable had as much star power and charisma in the latter half of his career as he did in the first.