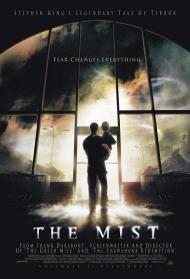 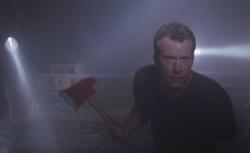 Thomas Jane in The Mist.

Although The Mist sounds like a remake of The Fog, it is actually based on a Stephen King novella that was first published in 1980, the same year The Fog came out. I am not sure if either one actually influenced the other.

Jane stars as David, a movie poster painter who heads to the grocery store with his son, after a storm came through and tore up trees and damaged his property. Once inside the store, it gets engulfed in a mist. The movie avoids using the word fog. The employees and the customers all get trapped inside the store as anyone who leaves it, is almost instantly killed by partially seen creatures.

Although the monsters outside are quite threatening, the philosophical danger comes from within. After David is reminded that people are civilized he responds, "Sure, as long as the machines are working and you can dial 911. But you take those things away, you throw people in the dark, you scare the shit out of them - no more rules." Soon the people in the store are divided into two groups. On one side there is David and a half dozen other folks. On the other is several dozen people lead by the a religious fanatic. "As a species we're fundamentally insane. Put more than two of us in a room, we pick sides and start dreaming up ways to kill one another. Why do you think we invented politics and religion?." One store employee notes.

I am not sure why Stephen King hates Christianity, but in his writing he equates believing in it to being insane. Harden plays the craziest bible thumper since Carrie's mom. She has the juiciest role in the movie, quoting the Bible and telling everyone that God has made her a messenger. She has the best lines, "I have a friend. God, up above. I talk to him everyday. Don't you condescend me." "I'll tell you what. The day I need a friend like you, I'll just have myself a little squat and shit one out."

Christianity is not the only institution to take a hit here. The Military comes off just as bad. Three Marines are trapped in the store as well. They do nothing until the Hollywood artist tells them what to do. None of them do anything heroic. Later in the movie they beat one private until he admits that the mist was caused by an experiment done on a nearby military base, "Yeah, we all heard stuff! Like uh, how they... they thought that there were other dimensions. You know, other... other worlds all around us, and how they wanted to try to make a window, you know, so they can look through and see what's on the other side." Then they stab him and throw him outside for the monsters to eat.

Besides being horribly offensive to some traditional American institutions, The Mist has one of the worst endings of the year, perhaps second only to No Country for Old Men. Since this movie does not care who it offends, I will spoil the ending. After escaping the clutches of the religious fanatics, David, his son and three others get into his car and drive till they run out of gas. With no gas, food or hope, David kills them all so as to not let the monsters get them. Minutes after doing so, the mist dissipates and the army moves through, ignoring David's wailing.

The set up for The Mist is old hat. It offends Christianity. More than half of the population of The United States indentifies themselves as Christian. The military is ultimately the bad guys. American soldiers are currently fighting overseas. It has a horribly depressing ending. For the life of me, I cannot figure out why this movie did not make any money at the box office.