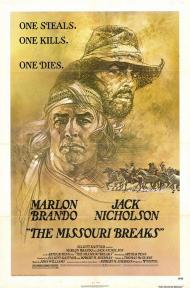 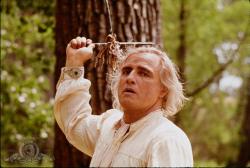 Marlon Brando in The Missouri Breaks.

Nicholson plays the leader of a gang of horse thieves with Brando as the psychotic gun-for-hire out to get him. Director Arthur Penn tries to do for westerns what he did for gangster pictures with Bonnie & Clyde 9 years before. The Missouri Breaks succeeds on some levels but falls far short of that classic.

The main problem is the anachronistic behavior and dialogue between rustler Tom Logan (Nicholson) and Jane Braxton (Kathleen Lloyd), daughter of the local land baron. She despises her father because he callously hangs horse thieves, so she throws herself at Tom and is the sexual aggressor the first time they have sex. She judges her father but accepts Tom even after she learns his true occupation. From the distance of more than 30 years it is easy to see her feelings of rebellion and anger towards her father (the establishment) as a political statement from the era. Tom represents the freedom of the counter culture.

I'm not saying there were no promiscuous women at that time and place. What I am saying is that her behavior is inconsistent, one minute she is joking about "sexual intercourse" with a strange man and the next saying she is too shy for a kiss. Then she shows up at his house uninvited and suggests sex. It doesn't ring true for the period. Again from the perspective of 2007 her character represents the social politics of the 1970's. It is fine to be socially or politically relevant in a movie but not at the cost of believable character behavior.

Tom and Jane's relationship gives the movie sex without love, so for plot's sake there should have been much less of it.

The cat and mouse game between Marlon and Jack is the only reason for this movie. Oh sure Harry Dean Stanton, Randy Quaid, Frederic Forrest and John P. Ryan are around as Logan's gang of thieves. They get picked off by Brando Rambo style, 6 years before First Blood. But ultimately this is a 2 man show. Only there is never any doubt who will come out on top. It is clear from the beginning that Nicholson is playing the anti-hero and Brando the villain.

Brando makes his first appearance about 40 minutes in. This would be his last starring role before settling into the cameos and old man parts he would play for the rest of his life. He was fat and balding with a long grey comb-over, but at 52 he was still able to ride a horse and pull off the action scenes. He may or may not have been improvising most of his dialogue and his accent seems to change at random. Lazy acting or character development? You decide. At any rate boring he's not. Robert E. Lee Clayton is like a wild west version of Colonel Kurtz from Apocalypse Now. He is every bit as crazy that's for sure. In one scene, for no apparent reason, he dons a dress and sunbonnet to kill a man.

Overall The Missouri Breaks has nice cinematography, great acting and a few memorable lines. It is a strange and original western and though it bogs down in places it has been unfairly forgotten.