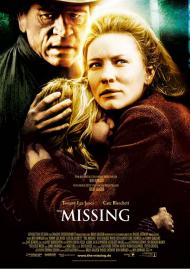 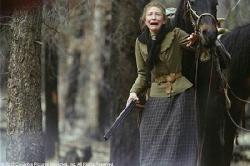 Cate Blanchett in The Missing.

With Chicago reviving the musical genre, perhaps it is time for Westerns, another genre long considered dead, to also make a comeback. For even though The Missing certainly isn't Best Picture of the year material as Chicago was, it is entertaining enough to prove that there is life left in the old horse opera yet.

Cate Blanchett (doing another superb accent) plays Maggie, a rancher and part time healer living in New Mexico in 1885. When renegade Apaches kidnap her oldest daughter, and the local Sheriff and the Army prove to be of no help, Maggie must team up with her estranged father (Tommy Lee Jones), to track down her daughter's captors and prevent them from crossing the border into Mexico. Fans of classic Westerns may notice a faint resemblance to John Ford's The Searchers, but the similarities are only cursory. To be more precise, if you combined The Searchers with Big Jake (another John Wayne starring film), you'd be somewhere close to this movie.

Despite Blanchett's strong performance, it is Tommy Lee Jones who steals the movie. While he's no Wayne, he seems perfectly suited for a Western with his sun burned, time weathered face. His crusty frontiersman turned Indian provides the heart and soul of this movie. And speaking of strong performances, little Jenna Boyd, playing Maggie's younger daughter, is strong enough to hold her own with the two veteran adult actors.

Most of the action takes place on the trail of the renegade Indians. Their leader is an Indian shaman whose mystical abilities include the power to blind men with a magical powder and the ability to affect his pursuers from a distance so long as he holds a personal possession of theirs.

The movie is also beautifully filmed, taking full advantage of the natural scenery of desert, mountains, and forests of the western countryside. Although, if this movie has a weakness, it is its habit of lingering just a touch too long on the spectacularly scenic vistas. For a movie that's over two hours, a few of these moments could easily have been trimmed.

Whether or not this movie starts a Western trend, which I find doubtful, it is a nice and highly entertaining throwback to a long neglected genre. 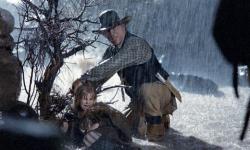 Tommy Lee Jones in The Missing.

Blanchett and Boyd indeed do a great job. Except Clint Eastwood, Jones has the best-weathered face for westerns. However, all of this great casting can't raise this movie above mediocrity.

Scott pointed out that the plot comes from two Wayne movies. It's too bad Wayne was not in this movie. Although it has great acting, none of the actors come close to Wayne's charm. All of the people in this movie are boring. There is never that "Wow!" moment when Blanchett gets pissed off enough to go "Ripley" on these Indians. Jones is down right dull. He plays the absent father, but never do we learn why. He is a man of few words.

Blanchett and Jones argue, but never talk details. So, what is the point? You never fully understand what the dynamics of their relationship are. He abandoned her and she had a rough life. So she becomes a bigoted healer? I'll take Wayne's arguments with Maureen O'Hara over this melodrama any day.

The movie starts well enough. A single mom of two has a boyfriend and a long lost father. Boyfriend comes up dead and daughter missing. The scene where Blanchett discovers this is very creepy. The movie looses most of the tension shortly there after. The plot becomes painfully predictable as the daughter is forced to get her father's help. The rest of the movie unfolds with out any surprises. Like Scott, I think the editor should have worked overtime. Why do we need to see Jones drawing? The entire curse scene did nothing for the plot, except slow it down.

This movie has more blood and personal issues than any John Wayne western. It's too bad they didn't have Wayne, or at the least a livelier script with some originality.