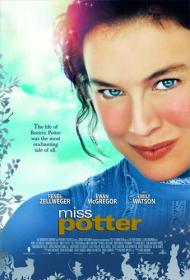 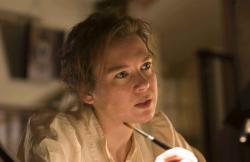 Miss Potter is the story of the author who wrote and illustrated The Tale of Peter Rabbit and other children's books. It attempts to be a romance. It dabbles into the fantasy. The final message turns out quite simply to be to follow your dreams.

Around the turn of the century, in upper class London, Beatrix Potter is considered an old maid being single at 32. It is not due to men's lack of interest in her but the fact that she is a bit crazy. She talks to her drawings and calls them her friends. In flashbacks we see that even as a child she enjoyed drawing and telling stories. She enjoyed them so much that the stories and her drawings became almost real to her.

After being turned down by several publishing companies, she finally gets a chance to have her first book published by two brothers who own their own company. It is not because they love her book, but because they need to give their third brother a job to keep him busy. The brother takes the job seriously and he and Beatrix turn her book into a best seller. They also fall in love.

Their love affair is very innocent as dictated by the times and their social standing. Beatrix has a chaperone follow her everywhere. Her snobby mother objects to the relationship. "I wish you wouldn't bring tradespeople into the house. They carry dust." She tells Beatrix.

The pace of it all is a bit slow and the love story is anything but satisfying. Like her upbringing, everything about Beatrix Potter seems very sanitized. By the conclusion of the movie you may wonder why they did not talk more about her later life, considering how the movie ends.

Through her royalties, Beatrix becomes a wealthy woman. This allows her independence. She is able to buy her own home and become a conservationist. She marries on her terms and lives the life she wants. She grew up drawing pictures of animals and living in a fantasy world, yet that very way of life enabled her to become rich and successful. In some ways, she was a pioneer for women and all noncomformists.