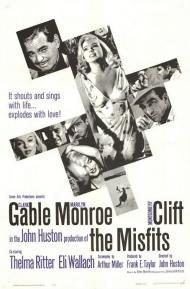 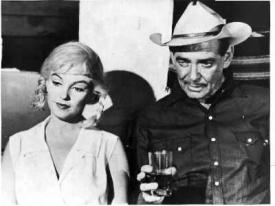 Movies are remembered for many different reasons. The best way for a movie to be remembered is if it is good. That is not the case with The Misfits. The Misfits is remembered because of its all-star cast. In fact, The Misfits was the last completed film for Clark Gable and Marilyn Monroe. Both would be dead within a few years of filming it. Gable's death has often been attributed to the making of this movie. Even though he was old he did his own stunts for the climactic horse roping scene and it has been suggested that it attributed to his death.

On the surface The Misfits tells the story of a recently divorced woman who encounters three needy men who all, in different ways, fall in love with her. Gable is a cowboy drifter with some emotional baggage. Montgomery Clift is a rodeo man with some mother issues. Eli Wallach is a pilot whose wife has recently died. She ends up living with Gable in an unfinished house that Wallach was building for his family. In one interesting scene, Wallach happens to see some photos of a younger Marilyn hanging in a closet. Monroe quickly closes the closet door and dismisses the photos as just something Gable's character put up. The photos are actually real publicity shots of Marilyn from earlier in her career.

If you look closer you find that this movie is all about Marilyn's life. Her husband at the time, Arthur Miller, wrote this movie for her. Each of the men in this movie represent one of her real life husbands. Wallach is her first husband when she was still Norma Jean. Wallach wants her to just be the domesticated wife and stay with him in their home. Clift's character represents Joe Dimagio. He is an athlete in the rodeo instead of the baseball stadium. She fawns over him when he gets hurt and shows genuine concern. Perhaps that was how Miller saw Monroe's and Dimagio's relationship? Gable's character, Gay, represents Miller. Like Miller, Gable is older than Monroe. In one very poignant scene Miller, through Gable, explains his attraction to Monroe. Gable tells Marilyn that she makes men feel alive when they are with her.

Any and every Monroe fan should watch this movie. It is full of insights into her life. At least as far as Arthur Miller saw it. For non-fans this is a tedious film to watch. This lengthy drama was shot in black & white and often drags at a snail's pace. In Annie Hall Woody Allen uses a marquee that has The Misfits on it to show that someone Annie was dating was not right for her. 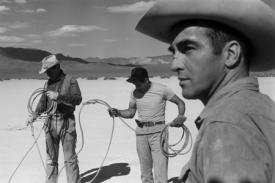 Montgomery Clift in The Misfits.

For the most part Eric has written an insightful review of this movie. I disagree only with his statement that for nonfans of Monroe (if there are any) this is a tedious film. It isn't. It is a well-written psychologically complex movie that has some of the greatest acting you will ever see on film. It's true that Miller, as a playwright, writes better for the stage than for the more action-friendly environment of film. But this doesn't detract from the enjoyment level of the movie as long as you are equipped with a reasonable attention span. I always associate this movie with Who's Afraid of Virginia Woolf?. They are similar in mood and pace, were both shot in black & white, both featured major stars doing some of their best work, both films represented a new style and attitude in Hollywood in terms of content and theme, and in both films an inordinate amount of alcohol is consumed.

Marilyn represents the ideal woman to the three male 'misfits'. All of them - with only slight variations - tell her that she looks like she was 'just born' or is 'brand new'. She combined innocence with raw sex appeal in a way that no one else has come close to - before or since. In the movie she feels deep empathy and compassion for every living thing.

Gable is an aging cowboy who knows his time in the world is nearly up. He doesn't understand - or want to be a part of - the new changing order. In one compelling scene a soused Gable runs out into the street from the bar he and his friends are sitting in and yells for his children. His children are never shown. Arthur Miller leaves it to the audience to decide if he really saw his kids or only imagined he did. Either way it is a sad, sad moment and some of Gable's finest acting.

Clift (who would also die a few years after making this movie) is the black sheep of a wealthy family. As always he exudes a tenderness beneath a tough exterior and a subtle sexual ambiguity. This is probably his finest performance after the car accident that permanently disfigured his face and nearly killed him a few years before.

Sadness is the key to The Misfits.

Eli Wallach and Thelma Ritter also play important parts in the story. She's the wisecracking - and wise - best friend/mentor to Monroe's childlike yet willful character. Wallach is Gable's sidekick but at the end of the movie he comes close to being a villian. Together they give great support to the three tragic stars at the movies core.

John Huston's direction often gets overlooked but it is brilliant. He sets up many great shots especially during the famous horse roping scenes. The final scene in the movie is an iconic screen moment. Gable and Monroe drive off as the sun sets. She asks, 'How do you find your way back in the dark?' He responds, 'Just look for that big star straight on. The highway's under it. It'll take us right home.' 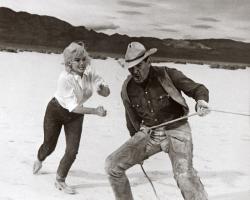 Eric, I don't know if you read that theory about each of the men in this film representing one of Monroe's husbands or if you made it up yourself, but I'm not buying into it. I think maybe you're such a fan of Monroe's that you're seeing things that aren't there. There are so many things going on below the surface (pretty much everything) here, but about the characters and not Monroe herself. Miller may have written this movie for her, but I don't think he wrote it about her (in the biographical details sense anyway).

Personally, I think that the way this movie best captures the essence of Monroe is that we really only see her through the men's eyes. Each of them sees her as they want to see her. She's like a beautiful angel in whom they see themselves reflected as better men, but none of them really see her for her.  Not even Miller as he gives each of the male characters much more depth than he gives to her. We learn very few details about Roslyn.

To my mind, it is Gable as Gay who is the real star. Monroe gives one of the finest performances of her career, but Gable outshines her with the greatest, most modern, dramatic acting I've ever seen him do. The drunken scene outside the bar after he claims to have seen his children (to me there's no doubt that he imagined them) and the penultimate one where he cuts the horse loose after wrestling it to the ground are two of his finest acting moments of all time. The symbolism of his letting go of the horse and of the life that he once knew is poignant and powerful.

Although there are career performances from its two leads, overall this is a better character study than it is a movie. It's very dry and long and not much happens in it. Patrick, you mention Thelma Ritter's character and I agree she plays an important part of the story. She's almost the only bit of comic relief in the entire movie, but she disappears about halfway through it and is never seen again. This is such a heavy and sad story that her absence is felt as any added lightness would have helped.

Knowing that Monroe, Clift and Gable all died before their time and that all would be dead within a few years of this movie's release adds to the sadness that permeates the story.

Perhaps this movie is best remembered because of its famous cast, but deservedly so. Their talent is on full display and they prove that they weren't just celebrities, but also actors of the highest order.