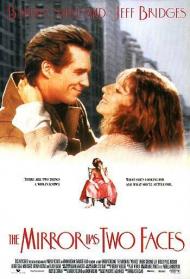 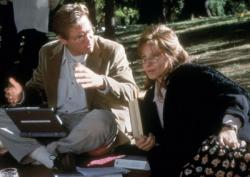 Jeff Bridges and Barbra Streisand in The Mirror has Two Faces.

The Mirror Has Two Faces is an almost brilliant look at romance and love. However it is often bogged down by its length and narcissistic star, Barbra Streisand. Streisand cannot keep the camera off herself. Although she is not in every scene, as she was in Yentl, her character Rose so dominates this movie that every other character suffers.

Rose and Greg are both Columbia University professors who meet when Rose's sister answers Greg's personal ad for Rose. Greg checks out Rose in action teaching her class and is fascinated enough to ask her on a date. The most fascinating aspect of this movie is when the two date and intellectually get turned on by each other and develop a true friendship.

Greg is a good looking guy who has dated many fine looking students. Rose is bland looking. Greg is interested in finding a plain looking woman he can be with because of the lame excuse that a beautiful woman is far to distracting to him. This is easily the weakest aspect to the film. In one scene Greg merely sees an attractive girl and becomes dizzy to the point that Rose instructs him to put his head between his legs until he feels better. He does it.

Greg and Rose eventually get married under the condition that he does not want her for sex. Sex would be too distracting for him. Being an old maid who still lives with her overbearing mother, Rose agrees to the arrangement. However, Rose is sexually attracted to Greg and as soon as she makes an attempt to have sex with him the marriage runs into trouble.

Greg goes on a trip to Europe while Rose stays home and goes through a self improvement program. She starts running and gets her hair dyed. Greg comes home to find Rose all gussied up. Barbra is supposed to look hot here but all that is different is that her hair is now blond, she is wearing a thinning black dress and she posed right.

The point of The Mirror Has Two Faces is that we can be intellectually and physically stimulated by someone. It makes fun of movies romantic notions of love at the same time that in reiterates the very stereotypes of them. Early in the movie Rose gives a lecture where she says that, because of romantic films, we all think we are supposed to here Puccini in our heads when we kiss someone we love. This movie tries very hard to make a statement about the realities of love.

At over two hours long it is far too bloated for its own good. Too often the movie shifts away from Greg. We see Rose talk to her mother to deal with her mommy issues. Lauren Bacall does a great job here but her role really should have been nothing more than a few scenes for laughs. Rose has to talk to her "fat" friend to emphasize her weight loss. Rose has to deal with her crush on her sister's husband. Barbra, get over yourself. A love story is about two people not one.

The best part of this movie is that we the audience actually see why Rose and Greg fall in love. In most romantic comedies two people meet and fall in love for no recognizable reason. Here it is plainly obvious that these two people need to be with each other. The side stories should have been trimmed dramatically.

The Mirror Has Two Faces is a decent enough romantic comedy but it takes too long to get to the ending that everyone knows will come. They kiss while Puccini is played in the background. 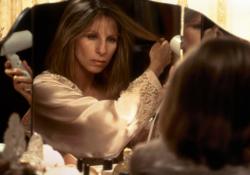 Barbra Streisand in The Mirror Has Two Faces.

This is Barbra Streisand's Woody Allen film. It's about a group of neurotic New Yorkers dealing with the foibles of falling in love. Like nearly any Allen movie Barbra showcases the city to great effect, especially the Columbia campus and Central Park. I disagree with Eric that her character totally dominates the movie. On the contrary this is more of an ensemble piece than most of her earlier movies.

I agree that the character of Greg is the least believable. I suppose Streisand had him react so ridiculously to women he finds sexually attractive in order to make us accept his desire for a platonic marriage. At any rate it is the movie's biggest flaw.

The other main problem is that the movie is at heart a comedy, but it is paced like a drama. It works best when it is only trying to make us laugh. My favorite lines include, "I tried that once, I looked like Shirley Temple on crack." and "You're the mother of the bride, not the opening act!"

The highly dramatic scene where Rose is rejected by Greg when she tries to have sex with him seems a bit out of place. I think Streisand is wonderful in it but it is just too heavy for the movie. The over-the-top ending assures us that this is a simple romantic comedy but Barbra tries to make it more than that.

The performances are all good. Lauren Bacall, and Mimi Rogers both steal a few scenes and Jeff Bridges does the best he can with an awkward character. Pierce Brosnan makes the most of a relatively small part, that does include a love scene with La Streisand.

I suppose the uneven script is the main culprit here, although Streisand must surely be held accountable for the finished product. Her name appears in the credits no less than 5 times. This one is clearly not the thought provoking movie Barbra may have wanted to make but it is still an enjoyable movie, just don't take it very seriously. It's worth watching for Rose's makeover alone. 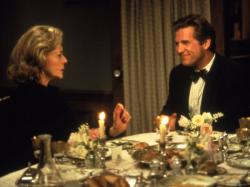 Lauren Bacall and Jeff Bridges in The Mirror Has Two Faces.

I agree that this movie is far too long and I also believe that Greg is the weakest character and the most unbelievable. My biggest complaint about the movie though is that the central conceit in it is never explained. Why does Greg want to marry Rose? He likes her as a friend, but doesn't want to have sex with her, so why exactly does he want to marry her? Wouldn't keeping their relationship as it is fit his plans better?

And while I'm sure there are some Mathematics Professors who stay in shape and dress nicely, Greg does seem to be in very good shape and dress pretty sharply for someone who's as socially inept as he clearly is.

Getting past the question of why they got married, their marriage does represent that old cliché that men expect the woman they married to stay the same; and then they change, while women expect their husbands to change after marriage; and then are surprised when they don't. Greg, who's obviously an idiot for not seeing that Rose has the hots for him, assumes that she'll never want sex, while Rose assumes he'll suddenly want her after they get married.

If this movie was 30 minutes shorter and funnier, its weaknesses wouldn't be as noticeable, since it's easier to be forgiving of comedies. As it currently stands, this is one of Streisand's lesser efforts. She needs to direct at least one more movie so that this one doesn't stand as her last.