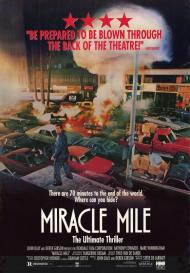 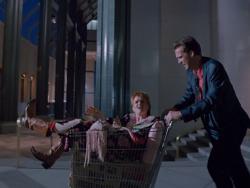 While North Korea's recent dalliance with nuclear weapons has stirred up fear and anger in the international community, it pales in comparison to the fear of nuclear war that existed in the 1980s. According to Hollywood in that decade it was practically a foregone conclusion that nuclear war would happen. There was certainly a genre of films then that exploited that fear. Miracle Mile is a lesser-known movie of that type and it plays directly off that fear.

It starts innocently enough. Harry is a trombone player who meets and falls for Julie, a waitress in Los Angeles. The first 20 minutes or so play out like a weak romantic comedy, but shortly the plot takes a sharp right-turn.

One night Harry picks up a ringing payphone. The frantic voice of a man on the other end gives Harry a confusing message. The man claims to be calling from a nuclear silo in North Dakota and is trying to reach his father, but apparently he misdialed. He tells Harry that they are about to launch their missiles in one hour. While Harry is on the phone with him, someone else enters the room with the man and Harry hears gunshots and then a different voice tells him to forget everything he just heard.

Scared shitless, but not sure whether or not to believe it, Harry goes into a diner and tells everyone what he just heard. Everyone is skeptical, but then one of the patrons, who has connections in Washington makes a couple of calls on her enormously oversized 1980s cell phone. She doesn't learn anything concrete, but enough to raise further suspicions. It's enough for Harry. He races to get Julie and get her to a helicopter that the woman with the cell phone arranges to meet them in one hour on top of a building. The rest of the movie is told in real-time as Harry races to save Julie and himself.

Clearly this is a B-movie and is dated in many ways (especially the fashions). Harry is able to accomplish an awful lot in that one hour and some of the dialogue is pretty cheesy. However, the story maintains a genuine sense of urgency that helps you forgive many of its faults. Plus, Anthony Edwards is likable and he creates a character that you can empathize with and he grounds a story that could easily get out of hand.

What's great about this movie is that through all of Harry's struggles you don't know until the end whether what he heard on the phone was true or just a sick prank. The panic he started in the diner though, is definitely real, and it spreads throughout the city as the people he told, tell two friends and then they tell two friends, and so on and so on and so on. Near the film's climax the entire city has become a near war zone as the city wakes up and begins reacting with blind panic.

Maybe it's because I'm a child of the 1980s, but I've always been a sucker for a good nuclear war related movie. And despite its flaws, this is a good example of that genre and because it's less well-known than some other movies of the era, it also might be one you've never seen or even heard of, but one worth watching nevertheless. 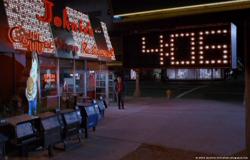 Although, like Scott, I lived through the 1980s, I had never heard of this movie before. It turns out to be a tense little adrenaline rush of an action flick. After Harry answers that payphone it has one of the biggest changes in tone of any movie I've ever seen. As Scott mentioned it starts off as a sweet love story about two oddballs that meet at the La Brea Tar Pits and fall instantly in love. After the phone call it becomes an end of the world disaster movie that is told on a very personal level. The entire movie runs only about 80 minutes and it's filled with excitement and an impending sense of doom.

The plot seems a bit too pat. I mean what were the odds that a woman with high reaching connections would just happen to be sitting in this diner so late at night? And everyone in the place reacts like they have been rehearsing for this emergency for years.

The large digital clock sign that rotates outside of the diner (see photo) is used to good effect throughout the movie, letting the viewer know how much time has passed and how little time Harry and Julie have left to get to that helicopter. Speaking of which, it's a bit frustrating how the script keeps throwing obstacles in Harry's way in order to delay he and Julie arriving at the helipad on time. The worst one is near the end when all hell breaks loose and just when you think they are finally going to make it there, Harry thinks he sees the helicopter pilot on the street. I actually groaned aloud with frustration while watching this scene.

There is a sweet little subplot involving Julie's feuding grandparents. They haven't spoken to each other in 15 years. Old pros John Ager and Lou Hancock give their big reunion scene a real jolt of emotion without playing it big. They just have to look at each other to know they are back together. Even knowing that they are shortly going to be incinerated by a nuclear blast they decide to spend what little time they have left catching up and sharing some intimate moments rather than attempting to flee to safety.

Another interesting character is played by Mykelti Williamson of Bubba Gump fame. He is a young man that Harry carjacks in his desperate quest to rescue Julie. While attempting to get gas Harry and this man have an encounter with two police officers that goes horribly wrong, resulting in both officers being burned alive and the gas station exploding. Although this sounds over the top it is handled in quite a realistic manner.

I won't give away the ending but if you've seen many 1980's nuclear holocaust movies you can probably guess. Miracle Mile (named after the famous strip in Los Angeles) is a well made little movie with a good cast and plenty of tense action. 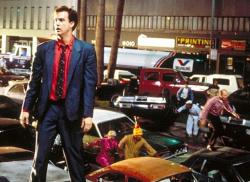 Scott and I first saw Miracle Mile in theaters when it first came out. My first thought after watching it again was very similar to Scott's first paragraph. Sure, North Korea's rockets make the news but today people seem more concerned about a zombie apocalypse than a nuclear one. Seriously, I have been present for more than one conversation between young men where they discuss with all earnestness what their plans are when the zombies start to take over.

The budget for Miracle Mile was clearly tight as demonstrated by the very limited sets and special affects. It dates the film but also keeps it very personal. We never see any details of the rockets or damage. We are never shown what is happening elsewhere. It stays almost entirely focused on Harry.

Scott wrote that word of mouth spread about the pending danger, causing the panic and riots. The movie never says that exactly. What it does do is show it all from Harry's perspective. Suddenly people start moving about acting desperate. People are clearly waking up to the news of the nuclear attack on Russia, and realizing that it may in fact be the last time they ever wake up. It is a truly frightening scene of confused desperation.

The problem with this cautionary tale is that it stays true to itself. The ending is quite probable for the situation presented but I wanted a happier ending. I never really came to like Harry as such, but I found myself getting frustrated with him. Why in the hell was it taking him so long to get to that helicopter.

Miracle Mile is a great time capsule about where our fears were in the 1980s.