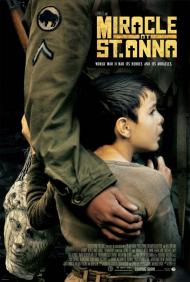 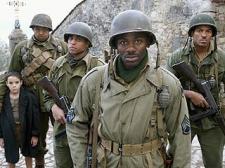 The cast of Miracle at St Anna.

Based on James McBride's novel, Miracle at St. Anna had all of the trappings of a great war movie. From the previews, this looked like an action picture with a mystery involving an ancient artifact and a recent murder. What it ends up being is just Spike Lee standing atop a soap box ranting about the injustices of black soldiers in World War II.

The movie opens with one old man killing another. The rest of the movie is a flashback to the events of a couple of days during World War II. Four American soldiers get separated, after a battle with Nazi’s, from the rest of their division. One of the men rescues a young Italian boy. The soldier and the boy both act a little nuts and thus form an instant bond. The American soldiers find themselves in an Italian mountain village behind enemy lines. After radioing back to HQ, they are told to capture a Nazi for information on the German’s locations.

All of that sounds simple enough, except that is only a small part of the story. Screen time is given to the Germans discussing their need to get a particular deserter, who ran off after witnessing a massacre at the hands of other Nazi’s. There is the tension between the racist company commander and his second in command. There is the story of the boy and the soldier, whom the boy affectionately calls “Chocolate giant.” There is the love triangle between two of the soldiers and the one and only hot Italian chick in the village. There is also the story of the partisan Italians fighting the Nazi’s.

Not only is the plot scattered about, but the movie suggests many things that never come to life. The statues head is ultimately pointless. The chocolate giant carries it around as if it were a good luck charm that he could one day sell for lots of money. The Italians refer to a mountain peak as the sleeping man. They have a scene where it is explained that the sleeping man will protect them. That foreshadowing is also pointless. At one point, a solider’s head is shown in close up with the mountain in the background so as to show their similar profiles, but he is not protecting the village at this point but fighting another American soldier. Last, but not least, I have no clue what the miracle is that the title is referring too.

Ths movie features some nicely filmed scenes. The battle at the river is properly tense. The scene where all four soldiers stare at the camera is very effective coming after another flashback. The location shots are all gorgeous. The problem is the flow of scenes is awkward at best. Shortly after finding the Italian boy, The chocolate giant walks over a bridge with the other three soldiers below him. They acknowledge each other but he does not go down to them, even though a path is clearly shown. The movie suddenly cuts to the three soldiers entering a barn and finding them inside. Another scene has two soldiers fist fighting over the married Italian girl they have only known for a couple of days? The worst moment in the movie is near the end when a passing Nazi officer hands a gun to a wounded American soldier and seriously says, “Defend yourself.” Defend himself from who? Does the Nazi officer want him to kill some of his own men?

At 154 minutes, Lee should have gotten off the soap box. From Axis Sally droning on and on about how badly America treats blacks, to an obnoxiously bigoted company commander, to a flash back involving a southern restaurant owner, Lee can’t stop reminding the audience that these are oppressed black Americans. He belittles his characters, as well as all black Americans, by suggesting that blacks are simply defined by how whites have treated them. 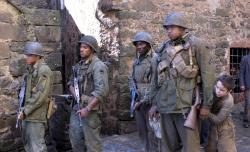 Miracle at St. Anna is the most ambitious Spike Lee movie to date. It marked his first foray to Europe and his first attempt at an epic war picture. While he got some things right, overall it's a disappointment. Although I strongly disagree with Eric that it somehow belittles its characters or black Americans simply because it shows racism existing at a time when blacks were being treated like second class citizens in this country.

The United States Military was segregated during WWII. So it's hardly a stretch to imagine that there were some bigoted officers. And in the American South in those days blacks couldn't eat at many diners just like the one depicted herein. Spike Lee has never been particularly subtle. Yes he paints racism with a wide brush and the company commander is a crude stereotype but this is a movie not a documentary.

At any rate, it has bigger problems than just cliched race relations. I agree it's beautifully shot and the decision to go on location was inspired but the movie is overlong, unfocused, and badly edited. The story switches perspectives in a jarring manner as it meanders along its way, and the physical movement of the four main guys is sloppily edited and lacks cohesion. It isn't always clear just where everyone is at any given moment, then they seem to show up conveniently out of nowhere. Eric and I are in agreement on that.

The final battle is the best scene in the movie. Lee doesn't skimp on the carnage and gore. Limbs are shot off and blood spurts from wounds. And it builds to a great emotional, as well as action-packed, climax. I found the ending to the book-end story quite satisfying although not at all surprising. Hector's mysterious benefactor can only be one person. Their names are obviously meant to be symbolic. Angelo is quite simply an angel and Hector Negron represents every negro in this man's army.

Eric I think the statue was simply an interesting way to insert a clue that leads to the final reunion. As for the Sleeping Man mountain peak, I'm not sure. To me the miracle was explained in the final scene. The man who helped save one life 40 years earlier gets saved in return by that person. I do agree wholeheartedly that the Nazi officer giving his Luger to an American soldier and telling him to defend himself is patently ridiculous. It is one of the least believable moments I've ever seen in a serious war movie. The massacre at Santa Anna really happened. Although some Italians were a bit irate at Spike Lee's depiction of a partisan traitor being the cause of it. Not surprisingly they'd rather place all the blame on the Nazis.

The cast is led by Michael Ealy and Derek Luke as Bishop and Stamps respectively. They represent two different black male points of view. Bishop is the angry black man who blames the white man for most of his problems. Stamps represents reason, he advocates taking personal responsibility for your own life. I must say both actors are incredibly easy on the eyes but it is Ealy who gives the better performance. His cocky but oh so charming Sgt. Bishop was my favorite character. He has the closest relationship with Sam, the simpleminded but kindhearted giant. The movie's best asset was the relationship between these four soldiers and the young boy. The focus should have stayed on them.

Despite its many flaws there is a great movie hiding somewhere in Miracle at St. Anna. I now have a better understanding of Spike Lee's public bitterness towards Quentin Tarantino. The year after this movie met with both critical and commercial failure, Tarantino's WWII movie Inglourious Basterds was a huge hit and earned a Best Picture Oscar nomination...