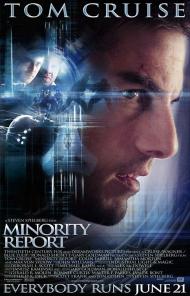 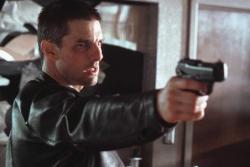 It's the year 2054 and Tom Cruise is a police detective in Washington DC working for an experimental department called 'Precrime'. With the help of three precog's they are able to see and thus prevent murders before they occur. The department has been so successful that not a single murder has taken place in its six-year history. As the program is just on the brink of being implemented nationwide it is predicted that Cruise's detective will commit murder himself. Suddenly we are in the middle of an action thriller with the former cop now on the run.

What follows is a quick paced rather convoluted series of close calls as our hero daringly alludes capture in his search for the truth, which he hopes will abdicate him of any guilt. The plot has more twists than a bag of pretzels. Some of them are glaringly obvious, others just plain ridiculous and a few precious moments offer brilliant entertainment. The scene in the mall with the female precog is the high point of the movie.

The futuristic sets are by now too familiar. You know there will be fancy looking hi-tech computers and vehicles that go up and down the sides of buildings. The electronic spiders that help the police hunt for criminals by reading their retina scans are well done. But the red balls that show the names of the criminals and their victims looks like a cheesy lottery drawing.

Spielberg has gotten darker and more adult in terms of content but seems to have slipped a little in his story telling abilities. Cruise is Cruise is Cruise. Some things never change.

Unfortunately what should have been riveting entertainment with a thought provoking political statement about where we, as a society, are heading, instead takes the lowbrow path of least resistance. How can a murder that never happens be a crime? At what point does the intention to kill become murder? These questions are only briefly pondered before being permanently pushed to the back burner. The two most powerful men in movies are content to ignore these issues and instead give us an all too familiar story of good cop - bad cop. 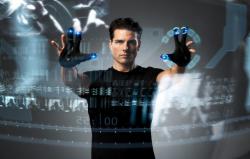 Maybe it was because all I was expecting of this movie was action and eye candy, that I enjoyed it much more than Patrick. Spielberg is a great storyteller, but when he starts pontificating by trying to throw meaning into his movies, he just comes off pretentious. Unlike A.I., in Minority Report he sticks to the plot and the action.

In fact, Minority Report is the least Spielbergian, Steven Spielberg movie yet. I was going to say that it has more violence and gore than any of his other movies, but I guess Saving Private Ryan's infamous first twenty minutes win that prize. Although where that movie was aiming for realism and shock, the violence and gore here are played strictly for entertainment purposes. One briefly funny scene involves two eyeballs rolling across the floor.

While I do agree with Patrick that the sets and special effects in this movie break no real ground, they are very well done. My one problem with the hi-tech future presented here is that we are expected to believe all of those things are going to be built within the next fifty years? That seems a little optimistic.

Where this movie went wrong for me was in the last twenty minutes. Through out the main part of the movie an unseen clock is ticking toward the time it has been predicted Cruise's character will commit murder. The thread of events builds toward that moment. And when that moment comes, the movie has reached its climax. Unfortunately, the story then meanders for another twenty minutes or so. If they could have wrapped up the story at that moment or with maybe one epilogue scene, I would have given this movie four stars. 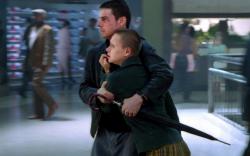 Minority Report starts as a very well made, thought provoking film. It cruises along at a nice pace. It then limps disappointedly to a unsatisfactory conclusion.

Tom Cruise plays an emotionally battered cop. He is divorced and his son was abducted 6 years ago, never to be heard from again. He gets set up for a future murder and spends much of the movie trying to prove his innocence.

The wonderful central question to this movie is quite thought provoking. Is it right to arrest someone for a murder they have yet to commit? On one hand, there has not been any murders since this form of policing begun. On the other hand, none of these people have actually committed murder. Intent to commit murder is in fact a crime though. Yet, in a crime of passion, when there is no premeditation, there is no prior intent. So the question is; when does a crime become a crime? Thinking about doing it? Preparing to do it? This can be taken even further. Do we control our destiny. Are we in charge of our actions or is it all predetermined? This movie should be shown in a philosophy class.

With all this nice philosophy flying around I, like Scott, was disappointed by the ending. It seemed that this whole thing is just about the cover up of a single murder. Sure, that can be a good mystery on it own, but this movie has such grand goings on that I had hoped for better. Where as Scott didn't like the drawn out ending, I didn't like that the movies never brings Cruise's character or the audience any closure on what actually happened to his son.

I disagree with Patrick on Tom Cruise's performance. It is one of the best things I have seen him in since he stopped playing cocky show offs. It is not that he has become some great actor, its just that this is one of his rare flawed character roles.

Colin Farrell, as a fellow cop, does a good job as well. I see him as a modern day Tyrone Power. Like Power, Farrell is thin, dark haired and good looking with some good screen presence. However, also like Power, Farrell lacks real star quality to ever put him in league with some one like Clark Gable or Tom Cruise.

Minority Report is intelligent and action packed. It is filled with fine performances and great special effects. However, much like A.I., Spielberg needed to work on a better ending.