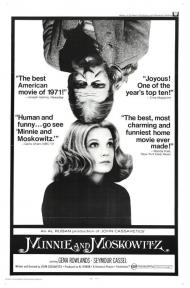 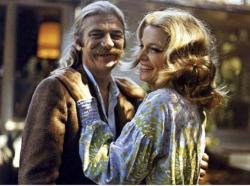 Seymour Cassel and Gena Rowlands in Minnie and Moskowitz.

Minnie and Moskowitz is a love story with humor by John Cassavetes. It tells the tale of how its titular characters meet and – I was going to write “fall in love” - but it would be more accurate to say they “collide in love”. Minnie and Moskowitz have a violent, tumultuous relationship right from the start. They first cross paths in a parking lot. Minnie Moore is attempting to end a date that's gone horribly wrong and Moskowitz (first name Seymour) is working as an attendant. He intervenes when the date tries to get physical with Minnie; she jumps in Seymour's truck and they drive away together.

Before this scene, though, we spend some time getting to know Minnie and Seymour separately. The one thing they have in common (actually they have two things in common). These two things are, a love of old movies (especially Bogart) and the fact that they are both very lonely souls. In between screenings of The Maltese Falcon and Casablanca we see aspects of both of their lives. Minnie works as a museum curator and is at the end of a relationship with a married man (played by her real life husband and the film's writer/director). Seymour is shown to be basically a nice guy but he has a quick temper, a lack of impulse control, and he's not exactly the brightest bulb on the tree. He looks like a hippie with his overgrown handlebar mustache and long ponytail.

Once they meet, Seymour is instantly smitten with Minnie. He, literally, begins to stalk her until he wears her down enough that she agrees to go on a date with him. While on this date they happen upon some people Minnie knows in the parking lot of a restaurant. It is immediately apparent that she is ashamed of Seymour. She doesn't introduce him and she even lets her friends think she is by herself. It isn't until these friends press her on joining them that she finally acknowledges her date's presence but when she tries to introduce Seymour to them, he storms off, jumps in his truck and leaves. Later on, when this man drops Minnie off at her apartment, Seymour is there waiting for her and he gets in a fight with the male friend, with Minnie getting caught in the crossfire.

There is a sadness to these characters and the film contains some heavy dramatic moments, but at heart Minnie and Moskowitz is a romantic comedy. The humor comes from these oddball characters. In one misguided attempt at being romantic, Seymour tells Minnie, “I think about you so much, I forget to go to the bathroom!” The two central performances are brilliantly offkilter. Seymour Cassel makes this annoying guy likable by showing his kind heart and by revealing his pain and loneliness. Gena Rowlands makes you believe she has fallen in love with a guy she would normally never look at twice. She goes from thinking he's beneath her to putting him above all others.

After they agree to get married they invite both of their mothers out to dinner to meet and to celebrate the impending nuptials. Minnie's mother was played by Lady Rowland, Gena's mother in real life, and Seymour's mother was played by Katherine Cassavetes, John's mother. This is the funniest scene in the movie, and it lets you know, just in case you weren't sure, that this is indeed a comedy. Katherine Cassavetes steals the scene as Seymour's sarcastic mother. She sees her son as a loser and she cannot fathom what the beautiful Minnie sees in him.

The films of John Cassavetes are an acquired taste. He was a renegade filmmaker who didn't play by the traditional rules of plot structure or story arc. He was known for shooting long scenes with lots of dialogue and a very natural style of acting. His scripts often seem improvised but in truth they were very specifically written. Minnie and Moskowitz is one of his more accessible, plot driven movies. And for once he allowed his characters a happy Hollywood ending.