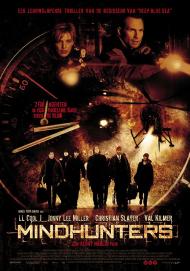 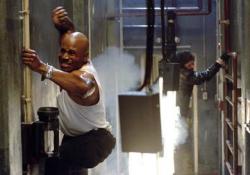 A group of elite FBI profilers-in-training embark on a weekend training mission on a deserted island used by the military. They quickly discover that the 'game' they are playing is for keeps and that one of them is - gasp - a psycho killer. As the body count rises can these professionals figure out who the killer is before it's too late?

A gung-ho cast, that includes familiar faces like Val Kilmer, Christian Slater and LL Cool J, adds to the fast-paced fun but some of the details are a bit far fetched. The filmmakers try hard at different times to make various characters seem like the guilty party but by the time the actual killer is revealed it is pretty obvious.

Like the recent Saw this movie suffers from what I call the impossible evil genius syndrome. You know where the bad guy is impossibly clever, with the ability to accomplish incredibly intricate tasks in amazingly short periods of time and able to second guess and predict everyone else's thoughts and actions.

Check your brain at the door and go along for the thrill ride. Otherwise you'll be sadly disappointed. 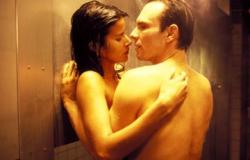 Like Patrick I was able to derive a few cheap thrills from this implausible feature, but overall was left baffled by the sheer amount of coincidences that the makers of this film expected us to swallow. As Patrick said, the killer would have to be a mind reader to accomplish all of the things that he is able to do in this story.

Having said that, this movie does still manage to pack a few surprises. Unlike most movies that feature a large ensemble cast where you can assume that only the biggest named stars will survive, in this movie no one is safe, no matter what their billing.

I have to confess that my expectations weren't high when walking in to see this movie after I'd learned that its release date had changed NINE times; never a good sign. It was originally scheduled for release in April of 2003. Instead of bothering to release it all, it should have gone straight to late night cable, where audiences expect to see cheesy action movies featuring former stars of the 1980s. 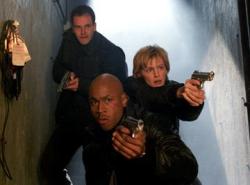 The cast gave me hope for this movie. I keep rooting for Christian Slater to have a hit movie. He has a distinct voice and attitude on screen. He was perfect in Heathers. His career has been reduced to "B" level recently. I also like Johnny Lee Miller. He was the best thing about Dracula 2000. Both actors had no chance to shine in this ridiculously written farfetched mess.

The writing is so awful on this movie that the best lines are, "Now we know his weakness: bullets." Someone says after shooting another person. L.L. Cool J gets the most memorable line though, "Iny, miny, mino, mo. Who's the next motherfucker to go?" Mindhunters is a movie about a bunch of analytical people. Apparently the writer was not one when he wrote this. As both Patrick and Scott wrote, the killer does impossible things to accomplish their goal. Do the makers of these types of films not think that the audience is paying attention?

Christian Slater needs a good role before he is completely forgotten. Johnny Lee Miller needs a break out role so he can be known for being more than just Angelina Jolie's first husband. And the writer/s of this movie need to find another profession altogether.