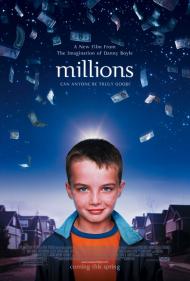 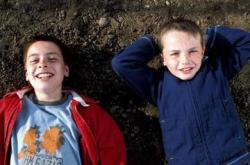 Who knew that Danny Boyle, the director of such dark movies as Trainspotting and 28 Days Later, could direct such a heartwarming story? I for one, while already knowing how talented he was, certainly didn't expect a movie like this one. However, anyone to whom heartwarming and family-friendly aren't four-letter words, should be glad he did.

The story takes place in Northern England, just before the New Year when the Euro is set to replace the English Pound. A widower and his two young sons are moving into a new house. The youngest son, eight-year old Damian (who narrates the film), is obsessed with the Catholic saints. One day, while sitting in a fort he's built out of the empty moving boxes, a large bag of money lands on top of his fort, seeming to fall out of nowhere. He shows the money to his brother, who immediately wants to spend it. Damian, who believes it was sent from God, wants to give it away to the poor. With only a week or two to spend it, before it becomes worthless, they have to decide quickly.

To keep the movie from becoming too artificially sweet, the makers of the film have wisely thrown in a great deal of humor, several quirks, and at least a hint of danger when the true 'owners' of the money come looking for it.

The quirks come in the form of several Catholic Saints who appear to Damian in what might, or might not, be just his imagination. Damian, who knows the stats of each saint the way most boys know the stats of their favorite sports player, never questions whether they're real or not, but asks each one if they've met his dead mother.

If all this goodness sounds too cloying, don't worry, it's not. Anthony, Damian's brother, wants nothing more than to spend all the money he can, even going so far as to try and buy real estate so that he'll have a solid investment. He also uses his new found wealth to his best advantage at school, getting chauffeured on the back of a friend's bike and having his food delivered to him in the cafeteria.

Boyle keeps a restrained hand on the rudder and never lets the sentiment take control. He also provides several small and touching moments that pass almost unnoticed; such as when Damian crawls into bed with his dad and you see that his dad has been sleeping with pillows placed on the opposite side of the bed where his wife would have slept. It's in the little moments like that one in which this movie finds it true heart.

I'll never doubt Danny Boyle's ability to direct a movie, in whatever genre he wants to work in, again. 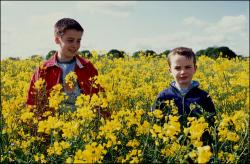 Scott is completely correct on this one. Millions is an extremely delightful film by the director of Trainspotting (1996) and 28 Days Later (2003). It will pull at your heart strings one moment and have you laughing the next. I cracked up every time the worthless local police officer showed up.

The movie is carried quite competently on the shoulders of two children. Each is charming in his own way. The youngest is a very devout catholic, who talks regularly to saints. He has some of the best lines like, “I thought it was from God. Who else would have that kind of money?” He thinks they should give the money to the poor and does so at his discretion. At one he and Saint Nicholas cram pound notes into the mail slot of a neighbor.

His older brother is quite bright. He wants to make a real estate purchase as a good investment. He also knows how to manipulate other children as well as adults. Whenever an adult has cornered him on something he simply hangs his head and says, “Our Mum is dead.” No adult can go any further when a child has told you that.

Have we all not, at one time or another, dreamed of what it would be like to have a great amount of money suddenly come into our possession? Here we have two innocent creatures given a gift. One wants to spend like an adult, while the other has a generous, yet naïve, heart. What strikes me most about this film is my reaction to them. I know that the younger boy is doing the right thing, yet I know also that I would likely act much more like the older, more self-serving, brother.

Millions is a brilliant family film that not only entertains but, as Scott noted, demonstrates very well just how diverse director Danny Boyle truly is. 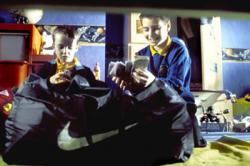 I wholeheartedly agree with my brothers, Millions is a charming feel-good comedy with a great message that is delivered in a delightfully lighthearted manner. The two young actors playing the Cunningham brothers are both wonderful with Alexander Nathan Etel deserving a special mention as Damian. He captures wide-eyed innocence and piety in a believable manner. He's a young boy who wants to do God's work but he is never too good to be true.

His interactions with the Saints (be it real or imagined) are amusing and informative, thanks to Damian's statistics such as birth and death dates, which he spouts upon recognition of each Saint and as a way of identifying them to the audience. Like most young kids Damian takes things at their literal meaning. When his older brother Anthony says to him, “What did you bring a thousand pounds to school for? Can't you see that's suspicious?” Damian replies earnestly, “It's not suspicious, it's unusual.”

Very few movies combine heart, humor and tension as successfully as Millions. The idea behind it is clever and so is the execution. Danny Boyle would, of course, go on to direct the Oscar winning Best Picture Slumdog Millionaire which, like this movie, combines all of these ingredients in a fantastic and original combination. I'm not sure how I missed this one when it first came out but I sure am glad I got around to watching it eventually. Millions is a classic movie for children and adults of all ages.