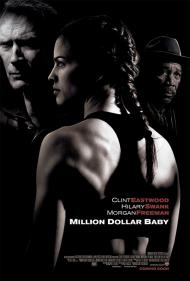 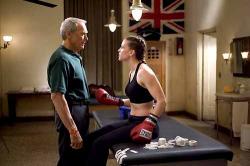 Sports as a metaphor for life is a very common theme in movies and there have been a slew of boxing movies that used it. Any new movie made using those devices would need to be something special to make it stand out from the pack. Million Dollar Baby, directed by and starring Clint Eastwood, manages to breathe new life into the genre with the angle of having a female boxer, ably played by Hilary Swank. But this is no mere gimmick; it changes the emotional focus of the story and gives the familiar plotline a new perspective.

Eastwood plays Frankie Dunn, a boxing trainer and manager who also owns and operates a broken down gym called the Hit Pit. His motto for his boxers is, "Always protect yourself." And its this attitude which keeps him holding his boxers back from going for the really big fights, which in turn, keeps his fighters from staying with him.

When 31 year old Maggie (Swank) first approaches him, asking to be trained, he refuses, but after several months of watching her train, and following an emotional outburst that shows Frankie that for Maggie there isn't anything else but this, he finally agrees to take her under his wing.

The first two-thirds of the film play out pretty straight forwardly as your Rocky-esque boxing film, with the underdog battling the odds on her way to the title. And although we've seen these kinds of scenes dozens of times before, Eastwood, Swank, and Freeman as the grizzled ex-fighter who runs the gym with Frankie, pull you into the story and the character's lives to such a degree that you really care for them.

It's in the final act that the movie takes a sharp left turn, stepping way outside the ring and into human drama/tragedy and also melodrama that threatens to go over the top at times. Particularly troublesome to me were the way Maggie's trailer park trash family were portrayed as such two-dimensional caricatures. The three leads are so well done and so fully rounded that her family seems like cartoon characters by comparison. The ending is saved from being too sappy only by a truly amazing performance by Clint Eastwood that I for one, didn't know he had in him.

With last year's Mystic River and now Million Dollar Baby, Eastwood has proved himself to be a director of still tremendous talent. This time around, he also proves himself to be an actor as well. 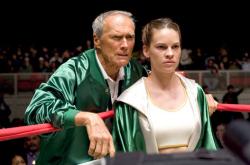 Years from now, however, it wouldn't surprise me a bit if The Aviator is more remembered. Relationship dramas have a history of success at The Academy Awards, Kramer vs. Kramer beat Apocalypse Now and Ordinary People bested Raging Bull. Ask yourself which of those movies is more revered today. We'll know if the cycle holds true in 15 or 20 years.

Million Dollar Baby draws you into the world of three extraordinary characters. It then takes you on an exhilarating and emotionally charged roller-coaster ride. It is a theatrical triumph after which you are drained and exhausted of all feeling.

A great movie but like last year's Passion of the Christ it does not need to be seen more than once.

Sports as a metaphor is old hat. The first two thirds of this slow paced movie are as routine as possible. An underdog comes out of nowhere and wins. How original! I was drawn into these characters lives, but I was not entertained by them.

Frankie is estranged from his real daughter so Maggie takes her place. He changes his normal routine for Maggie, but it ends in tragedy. Maggie wants her ungrateful mother's love, and eventually learns to stand up to her. Eddie ignores Danger Barch's ignorance, and even defends him because Danger loves boxing, even though he is not good at it.

The only scene I liked is when Maggie gives her mother the house, and her mother's first reaction is to bitch about how it may affect her welfare. Like many people, she is too lazy and scared to stand on her own. Just as Frankie is too scared to put his boxers in championship matches.

Million Dollar Baby is predictable from start (and thanks to all the press) to finish. The only thing this movie will be remembered for is the assisted suicide. The lesson of it all is that it is okay to die as long as you died having tried. Maggie was a long shot, but she gave it her all. Until she came along, Frankie was always cautious about taking his boxers to the next level. They changed each others lives at a huge cost to them both.