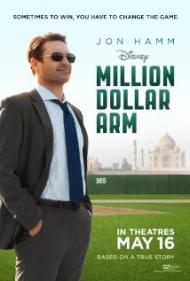 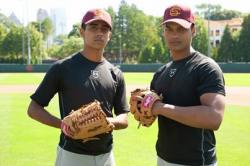 Million Dollar Arm is one of those great inspirational sports movies that are about so much more than the actual sport in question. There is sincere character development and a feel good ending that will leave you smiling. This film exemplifies the power of hope, hard work and kindness.

Jon Hamm plays JB Bernstein; a sports agent whose career is in a slump. He lives in a large home he bought when things were going good. He dates models and has an attractive doctor, Brenda, living in his guest home. After losing his one and only prospective client, JB gets the idea to go to India and turn a cricket bowler into a Major League baseball pitcher. He gets a money man to sponsor a contest to find an Indian cricket player to be recruited to pitch for a Major League Baseball franchise.

After traveling around India with a scene stealing Alan Arkin, JB returns to Los Angeles with an excitable interpreter and two over whelmed young Indian men from rural communities.  Rinku and Dinesh are two young men who see this contest as a way out of poverty. These boys have never even been in an elevator before. JB's home seems like a castle to them. They have no idea what to make of Brenda living in the guest house. They awkwardly ask JB if he kissed her. Their innocence is in direct contrast to JB.

Neither has ever played baseball before and the possibility of them making it into a professional baseball farm system seems highly unlikely. Based on a true story, you can look up the ending if you want but the beauty of this film is the journey as much as it is the destination. JB at first only sees the boys as an investment. As they do not speak English and are far too ill equipped to be on their own, he moves them into his home. He does not treat the nervous boys very well at first, forcing Brenda to inform him that he is being a jerk, resulting in JB reevaluating his priorities.

Jon Hamm is warm and affective as a man discovering that friends and family can mean more than financial success. He works overtime trying to get these two boys to learn baseball, while they unintentionally teach him how to be a better human being. Life is like baseball. Sure, winning is important but so is how well you play the game.

Million Dollar Arm is heartwarming, funny and romantic. It will awaken you to the power of dreams and the beauty of the human experience.