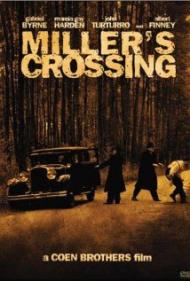 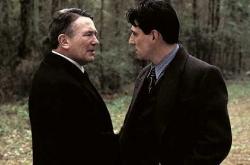 Miller's Crossing is the Coen Brothers' update on the gangster picture. It is set in an unnamed city in the United States during Prohibition. Gabriel Byrne stars as Tom Reagan, longtime confidante of the town's leading crime boss. This boss, Leo O'Bannon (Albert Finney), has the mayor and the chief of police in his back pocket. But when Leo sides with the crooked bookie Bernie Bernbaum (John Turturro) he ignites a war with his up and coming rival Johnny Caspar (Jon Polito). Tom then sets into motion a complex chain of events wherein he seemingly plays both sides of the struggle.

Marcia Gay Harden plays the one and only female character. She is Leo's moll and Tom's femme fatale. She also happens to be Bernie Bernbaum's sister. You have to pay close attention to truly appreciate the nuances of the script. There is much backstabbing and conspiring going on. All of which leads to the titular crossroads where a key element of the plot takes place.

Like in virtually all the Coen brothers' movies there are plenty of subtle references to other works. The plot borrows from several Dashiell Hammett novels, and there are many gangster picture and film noir tropes sprinkled throughout the film. The dialogue crackles and there are several great action sequences. The best of these is when an assassination attempt is made on Leo at his home one night. Albert Finney makes like James Cagney, proving his mettle and showing how he got to the top of the heap. He's as fearless as he is completely ruthless.

The acting is good all around. John Turturro really shines as Bernie. He's a slimy weasel who would sell his mother for a buck. The script never comes right out and says it but it suggests that Bernie is homosexual. Gabriel Byrne makes a great noir protagonist as Tom. It doesn't become clear just how smart he is until the end of the movie. He lives by the mantra, “Nobody knows anybody. Not that well.”