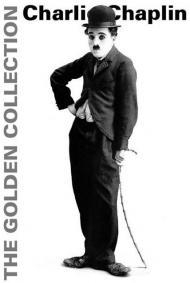 The Militant Suffragette (A Busy Day) finds Charlie Chaplin in drag, playing an excitable wife to a husband who cannot stop talking to other women.  At a military parade, the wife gets excited when she sees a camera filming the soldiers passing by.  She jumps in front of it and starts acting up.  She gets into a fight with the camera crew as well as the police.

The fact that this is supposed to be a woman makes it all the more funny.  She gets roughly pushed, punched and kicked.  She gives as well as receives though.  Several times, Chaplin's wig almost falls off.

She also gets into a fight with her husband when she catches him talking to another woman.  Later, she hysterically dances by herself as the band plays, only to have to again beat up her husband as he has found another girl to talk to.  The wife ends up being pushed off a tall pier into the ocean.

I laughed the entire film.  Seeing a "woman" being so physical in the fights is very amusing.    Had a real actress played the part it would have looked abusive, but Chaplin makes it funny.  Him smacking a cop and getting smacked back, is funny.  If a real actress did it, it would not have been. 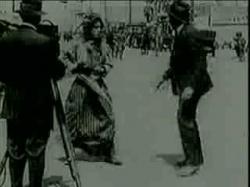 Charlie Chaplin drags it up.

This early Chaplin short is interesting historically as well as amusing in its slapstick humor.

Apparently early filmmakers would often peform renegade filming by taking advantage of large outside events.  In the case of this movie it's a parade.  Chaplin in drag mimes and acts up as the genuine soldiers march by.  If you look closely you can see several of them smile at Chaplin as he's pushed around.

Dressed in drag Chaplin reminded me very strongly of one of Monty Python's Pepperpot women, particularly Terry Jones.  In fact, Jones has said what a fan of Chaplin he is and you have to wonder if he hadn't seen this short.  There are certainly resemblances between their two "women" characters.

While this short is as silly as an old Looney Tunes cartoon and just as violent, curiously the title of it was changed.  It started with the generic title Busy Day, but was changed at some point to The Militant Suffragette, which seems to be saying that women who wanted the vote are violent nags like Chaplin's wife.  How's that for a message out of liberal Hollywood?

Certainly a minor Chaplin film, it's short enough and amusing enough to not out stay its welcome. 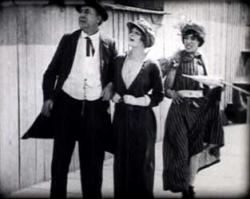 If looks could kill.

This may just be the least subtle movie he ever made but I agree that Chaplin’s shrew in drag is a laugh riot. The way he primps around rubbing his butt, slapping and punching, kicking and even chest-bumping people. His facial expressions as a woman are priceless as well. The pacing is very much like a Looney Tunes cartoon and his/her comeuppance at the end is appropriate.