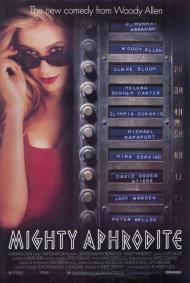 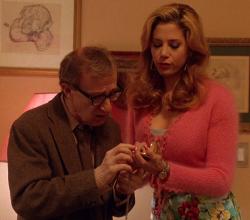 Mighty Aphrodite is probably most remembered as the movie that won Mira Sorvino the Best Supporting Actress Oscar, a rare win for a comic performance. She won the award over Joan Allen for Nixon, Kathleen Quinlan for Apollo 13, Mare Winningham for Georgia (I have no idea who she is or what that movie was), and Kate Winslet for Sense and Sensibility. It's a light part, but she is hilarious in it and despite the dramatic talent of her fellow nominees, I'm glad she won. I actually wish the Academy would honor more comedies.

Woody has made nearly 50 movies and not all of them are winners, but this is one of his funnier ones and one of the best of his from the 90s. It does have the same problem that most of his later comedies had where he was still playing the lead, and that is he's starring alongside an actress far too young for him. It's actually not Sorvino who's too young though, but  Helena Bonham Carter who's playing his wife, Amanda. There's a 30 year age gap and absolutely zero chemistry between the two of them.

Allen plays his stock character, this time a New York sportswriter named Lenny. He's married to Amanda, who works for an art gallery. They decide to adopt a son together whom they name Max. After a few years, Lenny becomes curious about Max's mother and after some detective work he learns that she is Linda Ash, a prostitute and part time porn actress, played by Sorvino. Knowing that someday Max might look up his birth mother, Lenny decides to try and help Linda straighten out her life. Things don't go quite according to plan, but the ending is a happy one, despite being deeply Greek.

Narrating and commenting on the story is a Greek chorus lead by F. Murray Abraham. They provide some nice funny moments and at times act as Lenny's conscience. It gives the movie a bit of a surreal feel to it that I quite enjoyed. Even Cassandra pops up for a couple of jokes.

Allen provides some laughs as always and the chorus is funny, but Sorvino steals every scene. Her delivery in that high pitched voice is perfect. It makes every line funnier, especially the dirty ones. When she shows Lenny a watch she owns, she tells him, "See, as the mainspring goes back and forth, the bishop keeps fucking her in the ass. It's a genuine antique and it keeps perfect time." When she gives him a present for helping her, "You didn't want a blowjob so the least I could do is get you a tie." And in perhaps her funniest line, she tells him about her first experience performing in front of a camera, "And so there I am on the first day, on the set, and there's this guy fucking me from behind, right, and there's these two huge guys dressed like cops in my mouth at the same time and I remember thinking to myself, 'I like acting. I wanna study.'" Or this exchange between the two of them. Linda, "You're married, aren't you?" "How can you tell?" "Cause you got that look." "What Look?" "The look like it's been a long time since you had a great blowjob." Without that voice, I doubt she would have won the Oscar.

This movie was made shortly after Allen divorced Mia Farrow. Reportedly he actually considered her for the part of his wife. While she would have been more appropriate than Helena Bonham Carter for the role, his casting agent made him realize that she probably wouldn't accept the part under the circumstances. I also wonder if the few snide remarks Lenny makes about adoption weren't aimed at Farrow, given her propensity for adopting children.

Woody seems to have creative spurts every now and then. He'll make bad comedy after bad comedy and then suddenly put out two or three good movies in a row. This movie came during one of those spurts, following Bullets Over Broadway and preceding his musical, often maligned, Everyone Says I Love You. Together those three movies make up my favorite of his films of the 1990s. 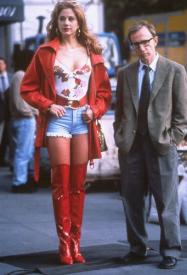 Mighty Aphrodite feels like an idea that was never fully developed. The Greek chorus doesn't really fit the story. It seems tacked on as a way of padding out the rather slight plot. This is one of Allen's smallest casts and simplest stories. It does feature some truly funny lines (many of which Scott already quoted), and Sorvino is hilarious, but as a whole I found it disappointing.

The relationship between Allen and Bonham Carter just doesn't work. Her character, Amanda, isn't developed at all. She is one of the laziest written females in his entire body of work. In the scenes between her and Jerry (Peter Weller) she does nothing but cast moon eyes at him and look vaguely confused.

It takes thirty minutes before Lenny meets Linda. The scene where he first goes to her apartment is where the film finally comes to life. All of Sorvino's scenes are funny but there just aren't enough of them. And just when you think Woody is going to resist the temptation, he goes and includes a scene where Lenny beds Linda.

Michael Rapaport is funny as the dimwitted Kevin, although he's underused. I would have preferred more of him and Linda and less Lenny and Amanda. The date between these two mentally challenged people is one of the best moments in the movie. It has an innocent charm that's quite appealing.

The ending feels rushed. From the time Kevin discovers the truth about Linda, to the end credits where the Greek chorus performs a Broadway-like musical number, takes less than five minutes. It's as if Allen wasn't sure how to end the movie so he just came up with magically convenient happy endings for all involved. Despite moments of comic brilliance, Mighty Aphrodite feels incomplete. This normally endlessly inspired filmmaker for once seems to have run out of ideas.