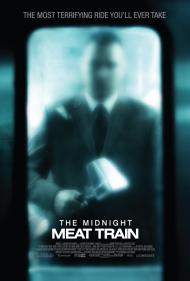 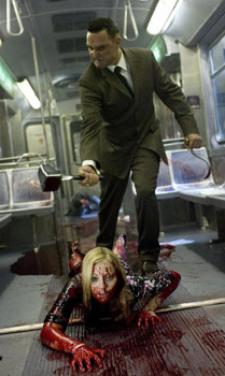 Midnight Meat Train is pure B movie horror. It has implausible characters and situations, but I was watching it alone late at night, so it kept my interest, all the way to the insipid ending.

Leon is an artistic photographer who, after being encouraged by Brooke Shields to be more daring with his photos, heads out at night, with camera in hand, in an unnamed metropolis. He soon comes across a quiet, large man whom he thinks is responsible for missing people. He follows him onto the subway, and his suspicions are soon confirmed. He witnesses the man fiercely kill someone. Of course, no one believes his story, not the police or his girlfriend.

The death scenes are very brutal. They are the kind that make you jerk your head while watching. Blood is all over the place. This is the kind of movie horror film fans like, and probably only horror film fans.

Pretty much any actor could have played Leon. Cooper has little to do, other than react to what is going on around him. Jones is the real treat here as the serial killer. His large frame makes him a very imposing villain. He never speaks. His only line comes near the end when he says, “Welcome.” This combination makes him a kind of serial killing Frankenstein.

I do not live in a city with a subway system. I wonder how Scott and Patrick, who do, would find the story? The ending takes what is already a farfetched plot, and stretches it to breaking.

Since I watched this late at night I was able to over look the many plot holes with the understanding that it was that kind of movie. I went along for the gory ride, and got caught up in the several, will they, or won't they get caught moments. Yeah, this movie is cheesy, but it can still entertain, when your in the right mind set.