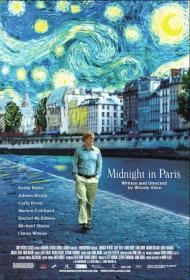 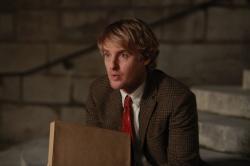 Owen Wilson is the perfect Woody Allen surrogate in Midnight in Paris.

Midnight in Paris begins with a cinematic postcard montage of the titular city, much as Allen did with his beloved New York 30 years ago in Manhattan. This movie is for anyone that has ever wished they could visit a specific time and place in history. Whatever your fantasy age (I would choose 1939 Hollywood) in our imaginations we picture a highly romanticized version as glimpsed through the prism of the passing years. Woody Allen transports us to Paris in the 1920s.

Owen Wilson takes his turn as the latest in the growing line of actors to play surrogate for Allen. He fares better than most, having the proper unremarkable looks and neurotic disposition for the part. He knows how to speak Allen’s language and mimics his nervous mannerisms without doing a parody. He plays Gil a self-proclaimed Hollywood hack on vacation in Paris with his fiancée and her wealthy conservative parents. Gil is writing a novel (set around a nostalgia shop) and harbors latent literary aspirations.

One night, while on a drunken stroll through the city of lights, (at the stroke of midnight) Gil is magically transported back to the 1920s. Like with other Allen flights-of-fancy films of the past this conceit simply has to be accepted and not thought about logically. From here the movie becomes a delightful comic fantasy as Allen lets his considerable imagination run wild.

On that first night Gil attends a party with F. Scott and Zelda Fitzgerald where Cole Porter plays piano and sings. He meets Ernest Hemingway and watches Josephine Baker shimmy. On later midnight trips to the past he gets advice on his novel from Gertrude Stein, meets Picasso and his current beautiful young lover, and has a chance encounter with Salvador Dali (among other luminaries of the day).

The cast is stellar, with the standouts being Adrien Brody for his wildly over-the-top impersonation of the famed surrealist Dali and to Corey Stoll for his hyper-masculine take on Ernest Hemingway. Allen seems to have the most fun in writing Hemingway’s dialogue, gleefully imitating the author’s famously spare writing style. The funniest exchange in the movie takes place between Hemingway and Gil. Hemingway is talking about how great sex provides temporary relief from the knowledge of one's mortality. Gil (as Allen) disagrees, replying, “No, I’ve never felt that.”

The theme of Midnight in Paris is that we often operate under the assumption that life was “better” during these Golden Ages. Ultimately Allen demonstrates the fallacy of this concept by having a character living during a so-called Golden Age who is herself pining for a previous era. “You think the 20s are a Golden Age? I long for Le Belle Époque!” Proving that for some of us at least, the grass is always greener in the past. In the process Woody gives us his third great movie of the century after Match Point and Vicky Cristina Barcelona. 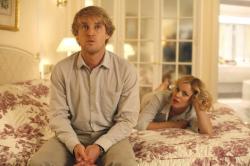 Owen Wilson and Rachel McAdams in Midnight in Paris.

As Hemingway might say, this is a fine movie, but it's not a great movie. The central idea is certainly a good one and the best scenes are the ones that take place in the past as Allen pokes fun at the great artists of the 1920s. It is in the modern day scenes where the movie falls rather flat and they do little to show why the past wouldn't be more attractive to Gil.

I wholeheartedly agree that it is Corey Stoll as Hemingway who is the real standout.  His clipped way of speaking in the manner of Hemingway's writing and his willingness to fight, along with his obsession with war and bravery are all classic. Brody is okay, but his part is relatively small.  His scene does contain one of the movie's funniest moments though, when Gil reveals to Dali and two other artists that he is in fact from the future and is currently living in two different time periods. They accept his story without batting an eye, to which Gil replies, "Of course you guys get it, you're surrealists."

In the present, Gil is engaged to the daughter of conservative parents. We're told repeatedly that they're conservative and some unfunny jokes are made about their conservative attitudes. My biggest problem with this part of the storyline is that Gil and his fiancee, Inez (an underused Rachel McAdams), are so different that it's impossible to see why they got engaged in the first place.

Michael Sheen's pendantic know-it-all is the funniest thing about the scenes in the present. Although, again, why anyone would find him attractive is questionable. But he definitely generates the most laughs in the present.

Wilson does do a pretty good surrogate Woody.  Better certainly than other recent attempts. His style of speaking lends itself to Woody's writing. A better actor might have made me feel Gil's dillema more strongly, but he certainly handles the comedy well enough.

Midnight in Paris doesn't come close to Woody's greatest films, but it is one of his strongest of the past decade. 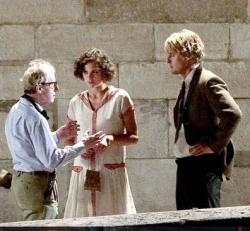 For a film about time travel, it is not as fun and whimsical as it should have been.  The one and only interesting aspect of Gil traveling to the past is that he runs into nearly every famous person of that place and time.  That makes for a few nice moments of name recognition, but this guy has traveled from the era of hand held computers to when movies did not even have sound.   Could Allen not come up with some jokes about technology or modern convenience versus life without sophisticated communication?

Gil meets many famous people and that in and of itself is intended to be entertainment.  However, as Scott pointed out, some are only in it for a few moments, if that.  Gil gets into a car with T. S. Eliot.  He sees Josephine Baker perform.   Hemingway is worth his screen time, but he never becomes anything more than a cliche.  I would have liked to have seen more of the Fitzgeralds as well.

Perhaps the story would have been better served if Gil had simply befriended one of these literary figures and they would have acted as a tour guide for him to the past.  As it is, he just happens to run into one famous person after another.  There is a certain charm to that but it also seems as if Woody Allen is merely name dropping.

I too liked the scene with Salvador Dali.  "Yes, but you're a surrealist! I'm a normal guy!"  Since the fun is in seeing famous artists and writers portrayed by famous actors, I was hoping for an appearance by my favorite surrealist, Rene Magritte.  He lived in Paris for a short time in the late 1920s.

Know-it-all Paul has this thought provoking line, "Nostalgia is denial - denial of the painful present... the erroneous notion that a different time period is better than the one ones living in - its a flaw in the romantic imagination of those people who find it difficult to cope with the present."   The jokes at the conservative fathers expense are marginaly funny and slightly annoying, "You always take the side of the help.  That's why Daddy says you're a communist."

At least Allen's assessment of his own talent is spot on.  "I'm having trouble because I'm a Hollywood hack who never gave real literature a shot."   That type of self deprecating humor made most of his earlier work funny.   Today he is little more than just an over rated writer/director living on the credits of his past, who occasionally makes something worth viewing.  Midnight in Paris has some nice moments, but it is more interesting than entertaining.