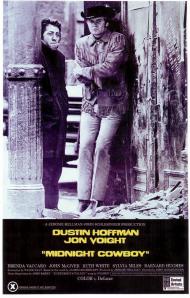 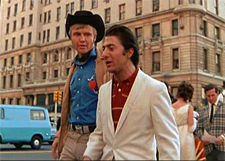 Midnight Cowboy is one of those movies that is so famous that even though this was the first time I'd ever actually watched it, I already felt familiar with it. I mean everybody knows the line, "I'm walking here!" by Dustin Hoffman. The AFI named that line the 27th greatest movie quote of all time (The movie itself is also on the AFI's 100 greatest movies list). Most film fans also know that it is the only X-Rated film to ever win the Best Picture Oscar. Ratso Rizzo and Joe Buck are iconic cinematic characters. And yet, despite all that I'd never actually watched it until now.

Although Hoffman is top billed, Jon Voight stars as Joe Buck; a young, not very bright Texan who decides to head to New York where he thinks he'll be able earn money as a male escort to rich New York women. Buck has a troubled past that is revealed through stream-of-consciousness flashbacks. Voight is good as the naive cowboy and his performance not only brought him to stardom, but also earned him an Oscar nomination.

As good as Voight is though, Hoffman steals the film as Enrico "Ratso" Rizzo; the streetwise, hustling New Yorker. His accent, his limp and his mannerisms form a character for the ages. His nickname is an apt one because he is very rat like as he crawls the streets of the city. Like Voight, Hoffman was also nominated for an Oscar for his role.

Together Buck and Rizzo form an unlikely friendship after a rough start when Rizzo cons Buck. As a pair they prove that the protagonists of a film don't have to be likable for a movie to be good. You wouldn't want to hang out with either of these two guys but at the same time you want to see what happens to them. Despite being fairly unlikable, you can empathize with their feelings of isolation, loneliness and the need to cling to another person for companionship no matter how unlikely the pairing.

The third main character in the story is New York City, but not the Disneyfied New York of today. This was a time when Times Square wasn't a place you took the family to see. It was filled with adult theaters and male and female prostitutes on the prowl. Abandoned buildings had yet to be torn down and replaced by Condos, McDonalds and Baby Gaps. Director Schlesinger does a great job of capturing the gritty essence of that bygone city.

While the central characters are interesting and the acting is superb, the plot isn't a cohesive whole. A series of events happen that aren't always connected rather than a true story being told. The real story of the movie is the friendship between Joe and Ratso, but too often that is obscured by different episodes. It's a platonic love story between two men essentially.

The fact that this movie was rated X at one time now seems quite quaint. The nudity is incredibly brief and the language is mild. Sex is talked about a great deal but only shown in a way that you could now practically get away with showing on network television. I imagine the biggest reason for the X might have been the scene when Joe gets a blow job from a strange man in a Times Square theater, although nothing is really shown of it. It has since been re-rated and now stands at the more sensible R rating.

Not every classic film lives up to its fame and I'm not sure as a whole if I'd say Midnight Cowboy does. Pieces of it though are brilliant, especially the performances of its two leads. They are the real reason this movie is remembered so well and they are the reason to watch it again or for the first time. 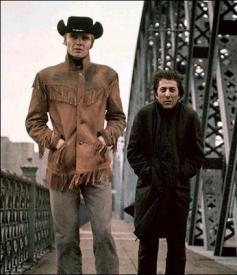 Midnight Cowboy is a brilliant and incredibly moving film. I have watched it numerous times over the years and it never fails to touch me deeply. This character study of two disparate men from vastly different worlds that form a marriage-like bond is a masterpiece, and one of the most deserving of all the movies to win the Best Picture Academy Award.

As Scott wrote, the Manhattan depicted here has been gone for several decades now. In fact, as we begin to approach the half century mark since Midnight Cowboy's original release date, it has long since become a period piece. The clothing and hair styles, the cars, the attitudes and street slang are all as obsolete as the guests at the psychedelic party Joe Buck and Ratso attend. This scene sets up the only time Joe has a successful experience as a male hustler in the entire story. He beds the kindhearted woman played by Brenda Vaccaro after initially being unable to get it up.

Scott mentioned the blow job in the movie theater scene as the main reason Midnight Cowboy garnered an X-rating but there is also a brief flashback where Joe Buck and his girlfriend are both brutally gang-raped that probably caused jaws to drop in 1969. Scott is right though that by today's standards it is all very tame. In truth this was before the X-rating became associated exclusively with pornography. It was changed to an R-rating in 1971, just two years later, without a single scene being edited or changed.

As Scott suggested, this is Joe Buck's story more than Rizzo's. We first encounter him in Texas and follow his bus journey to New York City, with the faces of his fellow passengers changing along the way. “I only get carsick on boats.” He tells one young mother with a sick child.

The movie ends with another bus journey. This time with Joe and Ratso heading to Miami together. I won't spoil the ending but it packs quite an emotional wallop as Joe Buck's journey of self-discovery is completed.

The theme song "Everybody's Talkin", sung by Harry Nilsson, has become part of the movie's lore. It underscores several scenes as Joe Buck wanders the streets around Times Square and shows up again at the end. The sight of the tall, handsome, blond, cowboy in the fringed jacket strolling the city streets beside the short, stooped, greasy, limping figure of Ratzo is truly iconic (see photo).

Scott praised Hoffmans' performance and it is truly one for the ages. He dug deep inside himself and it shows in every scene. Voight, in the less obviously flashy role, is just as good. He perfectly embodies the naïve hick in the big city, an easy mark with his every thought written clearly on his face for anyone to read. His cockiness covering his insecurities; his handsome face and well-formed physique his only commodity. There is a striking resemblance between this young Jon Voight and his stunningly beautiful daughter Angelina Jolie.

I strongly disagree with Scott that the episodic style of Midnight Cowboy detracts from its overall quality. This is a character driven story and we discover the city as Joe Buck discovers it, in separate vignettes. Along with the two towering performances by its stars, most of the credit for Midnight Cowboy goes to its director, John Schlesinger. He crafted a beautifully wrought story of friendship that is quintessentially of its time and also timeless. 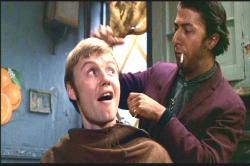 As Scott wrote, Midnight Cowboy tells of a platonic love story between two men. What makes these men fascinating is that both are in a sexual dilemma. Rizzo is a homosexual. He is in love with Joe.When he dreams of a future with Joe in Florida, Rizzo pictures himself hanging out with old ladies and Joe in only a swim suit. Rizzo's problem is that the man he loves is not gay.

Joe is in a far worse sexual place than Rizzo. Through brief flashbacks, we see Joe as a child sharing strangely intimate moments with his grandmother. These scenes include his grandmother giving him an enema, him brushing her hair and him sitting in bed naked with her and some old man. Then there is the scene where he gets raped while his girlfriend also gets raped, just after they had made love. Joe is only sure of one thing in his life, that he is sexually desirable. After the life he has led, he decides that the sex trade is where he is meant to be. The problem is that he really has no idea how the business actually works.

He and Rizzo strike up a friendship that is unlikely, yet necessary. Rizzo is a dirty, sickly little dweeb. He would never get someone as good looking as Joe to spend time with him without giving him plenty of money first. Joe has only known people who appreciate him for sex. Rizzo is the first person who helps him without expecting something in return. Had Rizzo ever made a serious attempt to have sex with Joe, especially early on, Joe would have quickly moved on. Their friendship is genuine and you see it grow through the course of the film.

Joe wears his cowboy clothes like a superhero scared to let people see who he really is. Late in the film he hocks his prized radio to feed himself and Rizzo. Even later in the film, he buys Rizzo and himself new clothes and finally gets rid of the costume. With Rizzo, he has no need for pretense. These two very lonely, damaged people develop a sincere love for each other. To much of the world, either of these men are untouchable. Rizzo looks and sounds disgusting, while Joe is so low that he can be bought for a few dollars. In each other's eyes though, there is an understanding and an appreciation.

There is an old saying that goes, "There is someone for everyone." Rizzo and Joe are not what either would describe as their perfect mate but somehow they are each what the other needs. Midnight Cowboy has one of the most unconventional, yet fascinating, relationships ever put on film. Like Patrick, I find Midnight Cowboy to be a brilliant and incredibly moving film.