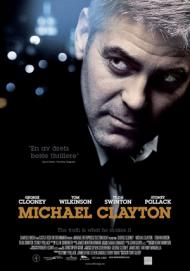 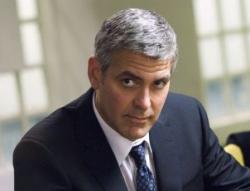 While I'm not nearly as concerned with actors using movies to spread propaganda (either liberal or conservative) as Eric is, I don't exactly look forward to movies that do so. This is why I avoided Michael Clayton for so long. This being a George Clooney film I made a snap judgment based on the previews that this wasn't the movie for me. It looked liked a chance for him to bash big business while making himself look good. What I couldn't tell about this movie until I finally watched it, is that it is a really good movie and that my first impression was almost entirely wrong.

If I had to sum this movie up with one word, it would be tense. From start to finish there is a sense of palpable tension, which goes to show that you don't need action or violence to create tension in a movie, since apart from the car explosion in the first ten minutes of the movie, there is almost no violence at all and all of the action is spoken and implied.

Clooney stars as Michael Clayton, a lawyer for a big New York Law firm, whose job is to act as a sort of legal janitor. He doesn't appear in court, he just works behind the scenes to make problems go away. The movie opens with him traveling up state to deal with a hit and run incident, but while driving back, his car is blown up, but after he has exited it. The story then flashes back four days to when Arthur (Wilkinson), another lawyer at the firm, has had a nervous breakdown during a deposition by a witness in a case against u-North, a large chemical company that Arthur is defending. Michael is sent to help clean up the mess this has caused.

Arthur, who is normally on mood stabilizers, has stopped taking his medication and suddenly grown a conscience. After coming across some damning evidence against u-North, he's decided to change sides in the law suit. Naturally enough, both u-North and the law firm don't want this to happen since it will cost both of them enormous sums of money. They want Michael to rein him in before more drastic measures are necessary.

The best thing about this movie is the way Michael is portrayed as morally ambiguous. He's not a saintly do-gooder, he's got a gambling problem, he's in debt to the mob, and he's a neglectful, absentee father. It is perhaps George Clooney's finest acting performance to date.

In fact, the cast is universally terrific. Wilkinson is fantastic as always as the confused lawyer of questionable mental stability. Sydney Pollack does a great job as Michael's boss. He's always been recognized as a great director, but he really is a decent actor as well, with presence. And Tilda Swinton gives an award-worthy turn as a the representative of u-North. I wouldn't be disappointed if they were all nominated for awards for this movie.

Yes this movie does do a little, big business is bad, but so long as propaganda is wrapped in a really good and entertaining movie as this one is, I don't mind it so much. And this movie really is a tense and well-acted movie. One of the year's ten best, no doubt. 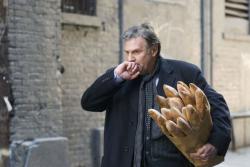 I've never been a huge George Clooney fan but I agree that he is excellent here. Like Bogey he has aged well, the graying hair and character lines around the eyes have increased his screen appeal. And like Bogey's Rick Blaine, Clooney's Michael Clayton uses a cynical shell to disguise a noble soul.

Tense is a good word for this one. This mood is there from the start but it takes a while longer for the plot to become clear. The first half hour or so shows you a series of small pieces to the overall puzzle. The plot doesn't really kick in until Wilkinson makes his appearance. I am astounded once again at the level of his acting. He is one of the all time greats and one of the few character actors capable of carrying a movie on his own.

I've now watched all five of this year's Best Picture nominees. They are all good movies and it will be interesting to see which one the Academy chooses to bestow the honor on. This one may not have the art crowd support that No Country for Old Men or There Will Be Blood have but one thing I can say about Michael Clayton is that it has the more sophisticated editing. It also has a great climactic scene. Easily Clooney's finest screen moment to date. 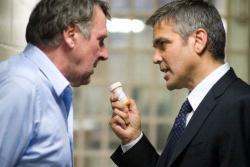 I am sitting here wondering just why Michael Clayton is nominated for so many Academy awards. It is not a sweeping tale. It is not some grandiose spectacle. It is not romantic in any way, shape or form. It carries no emotional impact. Even though it is too long and often boring, this is the anti-Oscar movie.

Michael Clayton throws you into a confusing mess and then slowly, very slowly, sorts everything out. The movie is about a law firm and a corrupt big business, but the movie sidetracks you with Clayton’s money problems and his son, who is given far too much screen time. Although my favorite scene is when Michael pretends to listen to his son prattle on about a book he read. As a father, that scene has played out in my own life countless times.

By the time the movie ends, Michael is very complacent with himself, but as a viewer I felt nothing. I did not particularly like Michael, or anyone on the screen for that matter. Sure, he is a flawed, morally ambiguous character with a cynical shell, but I never truly cared what happened to him. The best moment comes at the end when Michael confronts Karen and says he must have her heart racing. It is a satisfying scene, but it does not elevate Michael Clayton above it's disconcerting plot.

Yes, Patrick, this movie is a puzzle, but after piecing it all together I was disappointed to discover that the completed product was not really worth the effort, or so many award nominations. Watching this movie was like doing homework for my favorite class. Sure I love movies, but I am glad this assignment is over.