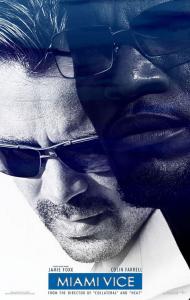 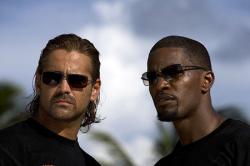 Other than the title character's names and occupations and the setting, this movie has little to do with the 1980's television series for which it is named. There are no cool montages while a hit song plays loudly, no houseboat with Sonny's alligator and no famous guest stars. This one is set in the present day and takes itself much more seriously.

If you are able to get beyond this then you will probably enjoy Miami Vice. It is a decent cops and bad guys yarn with a fairly glamorous setting and attractive stars. There is enough action but never is it over-the-top in a Bad Boys II way. The plot is pretty basic. Crockett and Tubbs go undercover to infiltrate a drug ring, the details don't matter much it is all in the execution of the story. Along the way there is sex, romance and plenty of violence. But to his credit Mann keeps it all more realistic than you might expect from a movie based on a cheesy '80's police drama.

Farrell and Foxx are both decent in the lead roles but to be honest I found the chemistry between them to be lacking. Perhaps because they really don't have that many scenes together. One thing I enjoyed about the old show was the friendship and interaction between Crocket and Tubbs. Here they seem more like business associates than really close friends.

In a nutshell Miami Vice is good (but not spectacular) summer popcorn fare that keeps the violence and action refreshingly real. 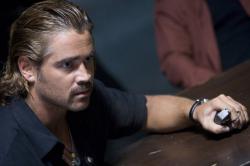 The entire movie looks like it was filmed through a blue filter. Everything is drab. Everything is very serious, and worst of all, everything moves at a snails pace.

Before Bryan Singer took over the Superman reins, Kevin Smith was given an assignment to write a Superman script where he had a new suit minus the cape. Superman became a legend with his patriotic colored suit and his cape. It would have been ridiculous to change that. Miami Vice was a hit show with it's endless links to the MTV generation. Pop stars and hit songs populated it's colorful, pastel t-shirt wearing, world.

I agree with Patrick, this movie is Miami Vice in name only. They might as well have called it something else. 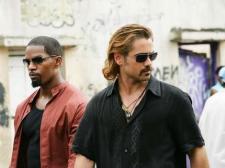 Where the fuck is Don Johnson when you need him?

I'll tell you the change from the series to this movie that annoyed me the most. That would be that in the series they could wrap up a case in a third of the time of this movie, but with three times the entertainment value. I was expecting, from what I'd read and heard, that this didn't resemble the series very much, but I wasn't prepared for it to be so long and so very, very boring.

Not only do this Crockett and this Tubbs have zero chemistry with each other, they have zero everything. Zero personality, zero charisma, zero character and zero anything that I might find interesting or care about. I'm not the biggest Colin Farrell fan, but he usually has a sort of roguish charm and a shit eating grin, but he's wasted here and not allowed to demonstrate any of that. Foxx is equally as dull, if not more so.

I was at least expecting some action, but a good hour and half in the middle is just Crockett and Tubbs talking to drug dealers. The big excitement is Crockett taking Isabella to Havana for a Mojito. By the time the final and short gun battle takes place at the shipyard, I was half hoping that they'd all die and save me from watching any more.

And why bother to set a movie in sunny Miami and then not show any of it? You know, sun, sand and sea? The stuff Miami is famous for. Why is almost the entire movie set at night?

Give me Don Johnson, Jan Hammer, pastel suits and wicker shoes without socks, Phil Collins, constant five-o'clock shadow! Give me anything but this pile of crap.