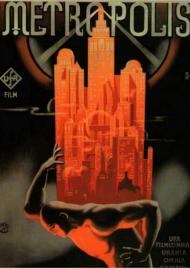 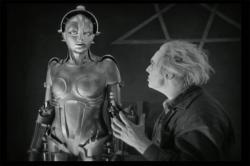 Released in 1927, Fritz Lang's epic Metropolis remains an astounding feat of sci-fi movie making. When the available technology is taken into account the special effects in this movie are truly remarkable. The vision of the futuristic city as seen here has influenced the look of many other films including the Star Wars series, Blade Runner, and The Fifth Element to name a few. Not to mention the Madonna video Express Yourself.

Metropolis is a futuristic mega-city where the population is divided between the thinkers, who represent the cultural elite, and the workers, who represent the plebian masses. The thinkers live at the top of the city, like gods among the clouds. They have magnificent rooftop gardens and an elaborate grid work of super highways, elevated trains and even airplanes that fly among the buildings. The workers live and toil, like human machinery, deep within the city depths. They provide the labor that keeps the city functioning without enjoying any of its luxuries.

These two groups exist in a symbiotic and symbolic relationship. The thinkers have the vision but lack the practical skills to actually run the machinery. The workers, on the other hand, can run the machinery but lack any knowledge of the "big picture".

Freder, son of Metropolis' most powerful man, meets and falls in love with Maria, the spiritual leader of the oppressed workers. When Freder's father finds out that an underground movement has arisen against him, he goes to visit Rotwang the inventor and has him create a machine man in the image of the beautiful Maria. This robot brings the vices of the seven deadly sins to the beautiful city and soon all Hell breaks loose. Can Freder, representing the heart, bring peace to Metropolis by acting as mediator between brain and hands?

By today's standards some of the overwrought melodrama comes across as high comedy, still, overall, the acting and message of Metropolis have stood the test of time. The standout in the film is Brigitte Helm in the dual role of Maria and the robot Futura. She fluidly encompasses the two extremes in human nature. The spiritual verses the carnal.

Several scenes from the original version of the movie are missing and assumed lost. These moments are explained with subtitles. For viewers unfamiliar with silent movies this is a good place to get your feet wet. The story is easy to follow and engaging, the visuals are awesome and the last thirty minutes are nonstop action. 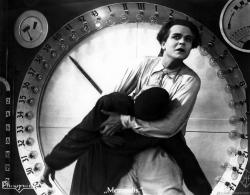 Poor Freder. All he does all day is play around in a garden with women wearing see-through tops. He chases them about and they tease him until he catches which ever one he desires to have sex with. Although surrounded by a bevy of girls waiting to "play" with him, he is love struck by the bland Maria, who brings some children to see the garden. Apparently something so wholesome seems like an attractive alternative to his routine carnal pleasures.

The naive Freder goes into the depths of the city, in hopes of finding Maria but instead comes upon a work station, where men toil, keeping the city's energy flowing.  He witnesses an explosion where men are hurt and killed. Freder has an epiphany where he sees the workers as men being sacrificed to a God. Freder races to his father, who is in the aptly named New Tower of Babel. He tells his father of his discovery and witnesses first hand how his father rules the city. Freder has suddenly had reality exposed to him, and he will never be the same.

Metropolis is heavy on political, religious and social topics, starting with the age old conflict of the haves versus the have nots. It is a love story between the social classes. Patrick mentioned the theme of the heart playing mediator between the brain and the hand. Maria tells the workers the Biblical story of the Tower of Babel. "People spoke the same language but could not understand each other." The scene of the workers listening to her preach brought to mind the famous quote from Karl Marx "Religion is the sigh of the oppressed creature, the heart of a heartless world, and the soul of soulless conditions. It is the opium of the people".

Patrick mentioned the futuristic look of the film and how it influenced other movies. Although it is a silent film, in black and white, with an art deco setting popular for the time, Metropolis still seems quite futuristic. It is an amazing accomplishment. Lang was quoted as saying New York city was his inspiration. "the film was born from my first sight of the skyscrapers in New York in October 1924" .

Lang and his wife wrote Metropolis in response to the socialist and communist movements in Germany at the time. In 1933 Goebbels and Hitler offered Lang the position of the head of the film industry in Nazi Germany. Lang turned down the offer and fled Germany, going to Paris and later to Hollywood. His wife stayed in Germany and joined the Nazi party. The position would later be given to Leni Riefenstahl.

Nearly one hundred years after its release, Metropolis is still a very relevant film. We live in a country where political leaders speak of class envy. It shows how a populace can be easily influenced. Sure, the acting is overwrought melodramatic crap, as was the norm in silent films, and it does run a bit long, but the story of a society divided is eternal. Metropolis is a masterpiece! 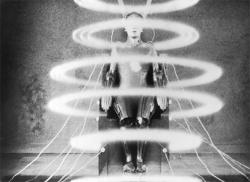 Brigitte Helm as the iconic robot in Metropolis.

There's no question that Metropolis was influential. As the first full length science fiction feature film, it established many standards of the genre. The sets and special effects are amazing, especially considering the technology of the times. Many of the images are iconic, particularly the robot. It has been credited with furthering the popularity of art deco. It took a year and a half to produce and it shows in almost every scene.

Anyone who listened to NYC Mayor de Blasio's campaign speeches in 2013 and his constant harping about 2 New Yorks, will have realized the timelessness of the the political themes underscored in the script. However, it's told so simplistically, and often contradictorily, that it fails to become thought provoking. The story suggests a disparity between the rich and the poor, but no mention is made of the middle class (no city that big could be made up of entirely the elite), and the lower classes are treated with no respect by the script, shown to be mindless drones who follow anyone who stands up and speaks to them; even forgetting about their children and then blaming the person who spoke to them when they remember them, accusing her of being a witch. Even director Fritz Lang, speaking years later, belittled the politics in the film, saying "You cannot make a social-conscious picture in which you say that the intermediary between the hand and the brain is the heart. I mean, that's a fairy tale – definitely. But I was very interested in machines. Anyway, I didn't like the picture – thought it was silly and stupid..." Critics of the day responded in a similar manner. Noted science fiction author, H.G. Wells, wrote in reference to it, "I have recently seen the silliest film. I do not believe it would be possible to make one sillier."

There's also irony at work when a film about the poor and downtrodden being used by the elite, features a dictatorial director using the crew and a cast of literally thousands with disregard for their health or safety. During the flood scene he reportedly  kept directing the extras and children to throw themselves at the jets of water until they were almost drowned. Brigitte Helm passed out from lack of air when the straps holding her in place on the table were too tight and the filming went on and on without break.  When Frohlich dislocated his thumb in one scene, Lang allowed him only 30 minutes to recover before filming resumed.

Eric mentioned the hammy, over-the-top acting and noted that it was typical of silent films. It's true that many films of the era did feature such bad acting, but not all of them. Some silent films actually manage to display some quite subtle acting. In any case, the acting done here is some of the worst in any film, silent or otherwise. It's fine during the action scenes, but whenever anyone is required to express an emotion, you'd think that they were on a stage trying to project to a back row that must be at least a mile away. Only Alfred Abel, as the leader of Metropolis, shows any restraint in his performance.

When the film was released in the US, it was trimmed dramatically. Paramount, the studio responsible, disapproved of what they saw as its communistic overtones and certain risque elements, and so they not only removed many scenes, but altered the title cards to change the story. In this new version, all of the action is blamed on a greedy employee and the revolting workers are identified as soulless robots. For many years, it was believed that the edited version was the only one that survived, but in 2008 a 16mm version was found in Argentina. Restorers were able to combine that footage with other footage to create a nearly complete version that runs nearly 2 and half hours. While the editorial changes Paramount made sound silly, I can't argue with the idea of trimming the running time. A tighter edit wouldn't hurt.

Visually this movie is so impressive that every movie buff should watch it at least once. However, the ideas behind it are so simplistic and vague that I can't imagine wanting to watch it twice. 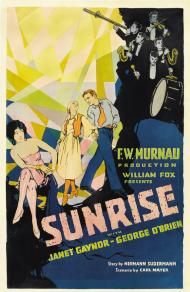 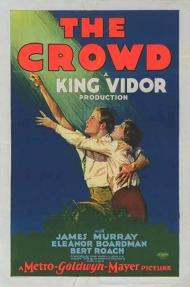