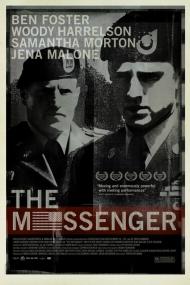 Every year I try to see as many of the Oscar nominated films as possible. I deliberately left The Messenger for near the end because the subject matter seemed so damned depressing I wasn't expecting much from it. Turns out I actually liked it more than I thought I would and the things I didn't like about it had nothing to do with its subject.

I'm sure there are worse jobs than being a part of the Casualty Notification unit in the military, but I'm damned if I can think of many. That's a sentiment shared by Sgt Montgomery, a decorated soldier, when he suddenly finds himself assigned to it after being injured in Iraq. Although reluctant at first, he doesn't hesitate to throw himself into his work.

He's trained on the job by Captain Stone (Harrelson in an Oscar nominated performance). The Captain is a lonely, recovering alcoholic. He lays down the ground rules very clearly for the Sgt and acts as his and the audience's guide into how the notification is handled by the military.

The scenes where Stone and Montgomery reveal the news of a soldier's death to their family are the strongest moments in the film. They are handled and filmed well and really carry an emotional impact. Each family that is told is different from the others and each one reacts a little bit differently and yet remarkably the same. As individual scenes they're great.

Overall though the movie feels like an interesting idea that doesn't go anywhere. It's as if the writers started with the idea of featuring Casualty Notifiers as the stars of the film and tried to come up with a story around that and never quite made it. There's more of a story-arc than an actual plot. Sgt Montgomery and Captain Stone bond and the Sgt ends up developing a relationship with the widow of a dead soldier, but that's pretty much the extent of the plot.

The cast is good and the entire movie played very low key. Foster does a decent job as Montgomery and Samantha Morton is fine as the widow. Harrelson does standout though and you can see why he was nominated. Although he gets a couple of emotional moments he's at his best at the beginning of the film when he's showing Montgomery the ropes. He's tough and no-nonsense and yet he delivers the news of death with dignity. He's easily the best part of the film.

I was wrong about this being a depressing movie. There are some sad moments, but I wouldn't call it depressing. It's definitely not the kind movie you need to watch twice, but I'm glad I saw it once. 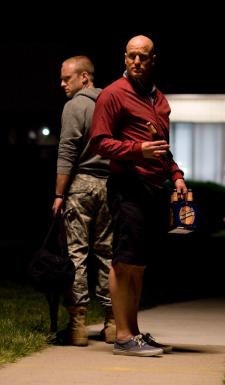 Montgomery and Stone enjoying some deserved down time.

The plot is simple, but there is a bit more going on in this story than the two men bonding and Sgt Montgomery developing a relationship with the widow. This movie is about how we affect each other. Even if we do not realize it at first.

Stone is lonely. He has a one night stand with a bartender who does not care much for him. He begs Montgomery to stay with him at the bar. He comes across cold and strong but is actually fragile.

Montgomery is likewise alone. He has listless sex with his ex-girl friend at the beginning of the movie. She is on top while he just lays there. When he is on top, his face is no where near hers. Afterwards they go to dinner where he can barely bring himself to even talk to her. He is a walking corpse.

Through their job of delivering death notices, Montgomery learns to appreciate life. He instantly sees something in Olivia after he tells her of her husbands death. Her reaction to the news is very controlled. She keeps looking to her house as she is worried about how to tell her son. He offers to tell him for her, and this begins his journey back to the living. He sees beyond his own problems and focuses on helping her.

Almost everyone in this movie feels a loss at one point or another, and they must find a way to move on. For Montgomery it was Olivia. The father apologizing to Montgomery and Stone for yelling at them, helped in his healing, and exemplified the way in which we can connect with someone after knowing them for mere moments. This is not at all a depressing movie about death, but one of rebirth.