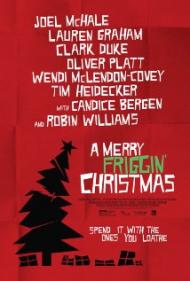 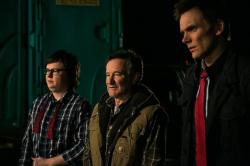 A Merry Friggin' Christmas only received a limited theatrical release in the United States but it is certainly a better film than some other Christmas movies I have seen in theaters. The plot is very simple and, if not for some language, could easily be a Lifetime television production. It is a worthwhile watch none-the-less, especially if you can appreciate some dark humor.

Joel McHale plays Boyd Mitchler, a married father of two who will go to any length to maintain his son’s belief in Santa Claus and give him the best Christmas he possibly can. Boyd hates his job and has not had sex with his wife in six months. He is stressed with the holidays and becomes even more so when he must spend Christmas with his parents and siblings, none of whom he is close to.

Through quick flashbacks and conversations with his mother, we learn that Boyd did not get along with his father, who was an alcoholic. Growing up, his father teased him and ruined Christmases. After attending church on Christmas Eve, the family settles down to an old fashioned celebration of reading "The Night before Christmas" and some heavy drinking.

Boyd suddenly realizes that he and his wife forgot to bring their son’s presents with them. Not wanting to disappoint his son, he decides to make the eight hour round trip drive from Wisconsin to Chicago and back again before the kids wake up on Christmas morning. After having car trouble, his father decides to drive him. This allows the father and son plenty of time to argue and learn to understand each other. Meanwhile, the children get to know their cousins, while his wife gets drunk with his mother.

Boyd’s family is dysfunctional and sadly real. Boyd’s brother in law is recently out of jail after an incidence of indecent exposure. His brother is taking care of a child that an ex-girlfriend left with him. His sister blames her problems on their mother for allowing their father to drink. The film really hit a personal note for me when Boyd and his father had their, no holds bar, conversations on the road. Just before getting married, my father and I had a blunt, honest conversation during a car ride where I cleaned out my emotional closet. It all came back to me as I watched McHale and Robin Williams lose their temper with each other as they each expressed pent up feelings.

The movie is a bit politically incorrect. It features a dirty, drunken Santa Claus and repeated accusations that the lack of snow is due to global warming. The family issues are a bit adult and some of the humor can be dark. This is most evident in the scene where they believe they hit and killed said Santa Claus. A Merry Friggin' Christmas is not all heavy. The antics of the children, a running joke with a patrol officer and the humor of Williams and McHale add many light moments. This film deserved a much better release and publicity campaign.