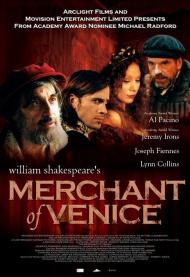 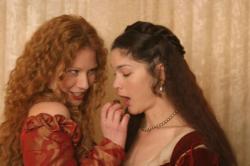 Lynn Collins and Heather Goldenhersh in The Merchant of Venice.

I find that when watching Shakespeare, for the first five minutes or so, all I can focus upon is the language and verse. By the end of the film however, if it's done well, I've forgotten that they are speaking any other way than normal. A transition made even easier with a brilliant cast of actors as is the case with this latest Shakespearian adaptation for the big screen.

Having never seen or read The Merchant of Venice, I was able to watch this version completely open-minded. Although I am certain there were alterations from the stage version, I was blissfully unaware of them in a way that a student of Shakespeare would not be and can therefore not fault the film for any changes.

The story opens in Venice, with young Bassanio (Fiennes) seeking to borrow money from his friend Antonio (Irons) to enable Bassanio to pursue Portia (Collins). Their relationship is only hinted at with looks and suggestive language, but it is clear that Antonio is in love with Bassanio, although the movie never reveals if their relationship was consummated, or if Bassanio's love was merely platonic. Antonio, unable to provide Bassanio with the money himself, takes a loan for him from the Jewish moneylender Shylock (Pacino). Shylock, agrees to lend Bassanio the money, but his choice of collateral is one pound of Antonio's flesh.

Of all the characters in the film, two of them stand out.

Shylock is the most sympathetic. Like all Jews of the period, he is forbidden from owning or operating a business; therefore, his only means of support is the lending of money with interest. The Catholic Church considered such an act a sin and therefore he is looked down upon, cursed and spit upon by the very same people who seek to borrow money from him, including Antonio. Over the course of the film, he loses his daughter and nearly everything else that he deems of value. Pacino delivers an Oscar worthy performance in the role.

Although there are many famous female characters in Shakespeare's plays, most of them are weak. Portia stands out among all of the Bard's creations as one of the strongest. Rather than letting events play out and accepting the outcome, as it seems she will do at the beginning of the play, she takes an active part in the proceedings and affects the final outcome herself.

Along with the beautiful language, the movie is beautiful to look at as well. Filmed in Venice, on the canals and in the ancient houses, the cinematography is very well done.

Perhaps due to the adaptation, The Merchant of Venice is the most contemporary and adult of all the Shakespearian films that I have seen. Too many of the movies based on his work come across as something you're forced to watch or read for a high school English class and are self-consciously literary. Pleasantly this one, without losing the art of Shakespeare's language, manages to be a gripping and intriguing film. 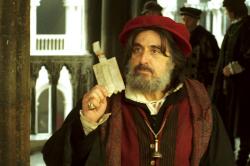 Al Pacino as Shylock in The Merchant of Venice.

Like Scott this was my first exposure to The Merchant of Venice. I was aware of the main characters and I'd heard the “Hath not a Jew eyes?” speech before but I hadn't seen any previous stage or screen version. I agree with my brother about the gorgeous cinematography and incredibly talented cast in this superlative movie adaptation. Having done a bit of research online, it seems director/writer Michael Radford stayed quite true to Shakespeare's original play. Although I'm not sure exactly how much dialogue was omitted or altered, the structure remains intact.

Portia is a delightful character with a strong mind and a great sense of humor. Her late father's will stipulates her suitors must choose from three caskets, one gold, one silver and one lead. If he opens the one containing the portrait of Portia, he wins her hand in marriage. Each casket has a different slogan attached to it and we see Portia's first two eager suitors misinterpret these slogans and make the wrong choice. When Bassanio's turn to choose comes, it's obvious he will make the right choice even without the song verses being sung in the background, “Tell me where is fancy bred, in the heart, or in the head?”

Although the titular Merchant is Antonio, by far the play's most famous character is Shylock. Up until the early 19th Century, when Edmund Kean first trod the boards as a sympathetic Shylock, the character had been portrayed as either a clownish buffoon or a villain of purest evil. Since Kean's day Shylock has been almost exclusively played as sympathetic. Pacino sinks his teeth into the role. He does justice to the play's most well-known speech, but really shines at the climax as he goes from a fury of vengeance to a beaten man.

Throughout history The Merchant of Venice has been attacked as being antisemitic. As recently as Nazi Germany it was used as propaganda. The main reason being the climax where Shylock has to be taught the concept of mercy by a Christian. Portia (in disguise as a doctor) explains that mercy... “is twice blest: It blesseth him that gives and him that takes."  However an argument can be made that is just as persuasive to the opposite position. How can the play be antisemitic when Shakespeare gives Shylock one of the most eloquent pleas for tolerance ever written? There's a reason it's one of the most famous speeches in all of The Bard's work.

As for the gay angle, it seems Shakespeare left it open to interpretation. Clearly theirs is a very intense relationship and Shakespeare wrote some rather intimate dialogue for Antonio and Bassanio to speak to each other. Both Michael Radford and Jeremy Irons are on record as saying they saw Antonio's and Bassanio's relationship as platonic. Joseph Fiennes, however, saw them as lovers. He improvised the scene where Bassanio kisses Antonio on the mouth. It surprised Irons but he stayed in character and this single take was left in the finished film.

Although ostensibly a comedy, (it has a happy ending for the lovers) The Merchant of Venice remains a dramatically powerful play more than four-hundred years after it was written. Michael Radford has crafted a memorable motion picture adaptation. 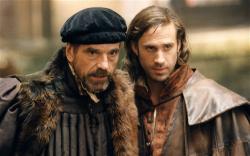 Jeremy Irons and Joseph Fiennes in Merchant of Venice

The first scene is clearly set up for us to think that Bassanio and Antonio have a sexual relationship. When Bassanio asks Antonio for money, the two move to the bedroom where Fiennes lays back on the bed. Antonio quickly agrees to help Bassanio get a loan. Before leaving the bedroom, Bassanio kisses Antonio on the lips as Bassaino looks back on him intently.

I found an interview with Joseph Fiennes and Jeremy Irons online, in which Fiennes thinks Shakespeare was very much suggesting an intimate relationship between the two men, while Irons thinks that straight men simply had a different level of intimacy in those days. Shakespeare definitely left it up to interpretation while I think Michael Radford strongly suggests that Bassanio is a homosexual in love with Antonio. Radford chose to film that first scene in a bedroom for a reason. Look to the next scene where Radford chose to place a topless woman on the street as Bassanio and Antonio pass by. Antonio gives her not a glance while Bassanio clearly enjoys the view she provides.

I agree with my brother’s opinion on Al Pacino’s performance. His angry reading of, “I am a Jew. Hath not a Jew eyes? hath not a Jew hands,…” is truly great. Shylock is an angry man and he has many reasons to be, but in the hands of Pacino we believe everything that he says and we do come to sympathize with him.

As Patrick wrote, the character of Shylock has greatly encouraged the Jewish stereotype of the greedy Jewish money man. Not since the Biblical references of Jewish leaders using the temple for business that led to the crucifixion, has such famous writing so depicted Jews as men willing to kill over money. In both texts it is a Jew versus a Christian. No wonder, as Patrick mentioned, Nazi Germany used this play as propaganda.

For me, this story is about love in its different forms, be it between men, women, couples, parent and child. At the trial, in which Shylock wants his pound of flesh, Bassanio, who has now married Portia, emotionally tells Antonio that he would sacrifice her to save Bassanio. Portia is secretly present and gets her revenge.  The issues with the rings is quite entertaining to watch play out. Portia plays harshly with Bassanio’s affection, making him quite upset until they decide to go lay with each other.  It is a pleasantly light ending to a film that has such dramatic moments.

The Merchant of Venice is thus far one of my favorite film interpretations of a Shakespeare play.