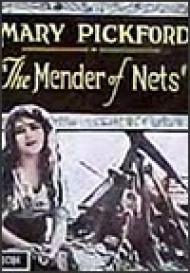 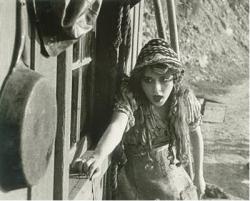 The net mender to the rescue.

This early Pickford short is barely 15 minutes long.  Pickford plays a net mender.  The movie opens with her sitting near the shore sewing a net.  Along comes a sailor and proposes marriage.  She accepts, and both seem happy.

He is however, still attracted to his former flame and cannot stay away from her.  Her brother grabs his gun and decides to put an end to this fishing Romeo, for leading his sister on.  Can the net mender mend bridges and broken hearts as well as nets?

The only thing I got out of this film was that much of it was filmed outside.  Silent movies often did that in order to use the sunlight to light their movies.  Once bright enough lights were perfected, movies moved indoors and too often the studios became too lazy about filming outside, even when the scene took place there.

Pickford started making movies in 1909 and averaged 50 movies a year for the next few years.  Granted these were all short films, but the young lady was dedicated to her work.  She became a film producer, and one of, if not the most, powerful females in Hollywood during the silent film era. 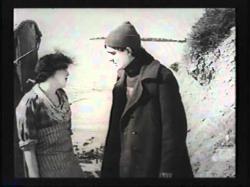 Mabel Normand and Charles West in The Mender of Nets.

This 1912 short (and despite what it says on the title card of some prints, it was filmed in 1912) is an early example of pure soap opera. There are are plot elements in here that are still being reused in storylines today. There's a proposal, jealousy, another woman and an angry brother. Sure, by today's standards it's all pretty tame, but it does go to show how, in some ways, movies haven't really changed all that much.

As Eric said there are some nice shots outside on the beach. It was filmed in Santa Monica, but the location isn't the only thing of note.

Director D.W. Griffith makes good, early use of cross-cutting to create movement and to emphasize the action. In those days, moving the camera while filming just wasn't possible and so it was up to the editing to create any sense of movement.  The cross cutting technique is most noticeable in this short when the brother is trying to break through the door. First, there's a scene of him banging on the door from one side and then the film cuts to him bursting through the other side, creating the illusion that it all happened sequentially.

The other thing that struck me was the naturalistic style of acting. Well, it's natural for 1912 anyway. Apart from when Mabel and Mary are overly grief stricken, the acting style is fairly underplayed. Even the brother, who is the closest the movie gives us to a villain, keeps his mustache twirling under control.

Sure, from a modern perspective there's very little of real entertainment value here, but for those interested in seeing a early stage in the development of an art form, there are things of interest in it. 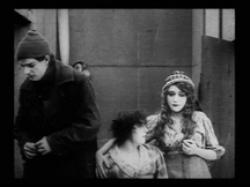 Charles West, Mabel Normand and Mary Pickford in The Mender of Nets.

D.W. Griffith was the most influential early film director. More than any other person he created the language of cinema. 1912 was an important year for him as his art was developing at a rapid rate. As Scott pointed out the editing is very effective in telling this simple story.

He makes good use of long shots and medium shots and the cuts increase in frequency as the story builds to its climax. The camera work by legendary lensman, and frequent Griffith collaborator, G. W. (Billy) Bitzer reveals his remarkable eye. He makes the most of the evocative windswept seaside setting with those dramatic cliffs looming in the background and large rocks beaten with waves in the foreground. Together Griffith and Bitzer were the greatest director/cinematographer team of the silent era.

As noted above the acting is quite good. Future superstars Mary Pickford and Mabel Normand were both naturals in front of the camera. Although Mabel Normand would become famous as a comic actress she proves her ability to handle drama here. Mary Pickford simply glowed in front of the camera. She is both subtle and overtly dramatic depending on what the scene calls for. Notice the look of terror on her face when she sees her rival's brother has a gun in his hand and murder on his mind.

Charles West is handsome and stoic as the love interest. He displays emotion(chiefly guilt and remorse) in a much more subtle manner than the grief stricken women do in their moments of lamentation. The hammiest turn is given by Charles Hill Mailes as the brother.  It's true there is no mustache twirling but he does grimace and eye roll a bit too broadly.

The story is as old as time itself. A man toys with a woman's affections but then proposes to another only to have the first woman's brother defend her honor. The story certainly implies that Mabel slept with the fisherman. Watch how the noble Mary gives up her man once she realizes this truth.

Griffith ends the story the same way it began, with a shot of Mary mending a net on the seashore. The final shot fades slowly to black until only the shimmering waves are visible. It's a nice artistic touch in a simple yet effective movie from the very early days of the medium. 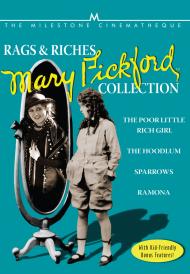