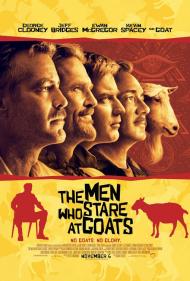 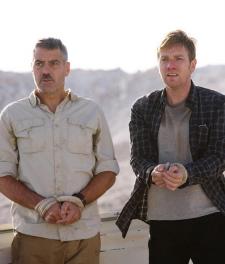 George Clooney and Ewan McGregor in The Men Who Stare at Goats.

The Men Who Stare at Goats is an offbeat movie that never quite finds its footing. It can never seem to decide whether or not it's poking fun of its protagonists or celebrating them; most of the time it seems to want to do both. It's definitely at its best when it's trying to be funny but it needed to go further for it to really work.

Ewan McGregor plays Ann Arbor reporter Bob Wilton. After his wife leaves him for his editor, Bob decides to go to Iraq as a correspondent in an attempt to prove something to himself and her. He doesn't have any success in covering the war but instead hooks up with former soldier Lyn Cassady (Clooney). Lyn was part of a failed military experiment in the 1980s known as the New Earth Army whose purpose was to develop psychic super soldiers and is in Iraq because he believes he's on another mission.

The rest of the movie is split between the story of Bob and Lyn's adventures in Iraq and flashbacks of Lyn's history with the military. His squad was lead by a hippy Colonel played by Jeff Bridges who is trying to somehow combine the drug influenced peace-love-dope culture of the 1960s with a military sensibility. Bridges is a real highlight of the movie and he steals most of the scenes he appears in, seeming at times to channel his Big Lebowski character. The squad tried various psychic techniques; such as using the power of their mind to track down missing people and eventually even to try and kill with just the power of their mind (to practice this last technique they stared at goats, hence the title). The squad was eventually broken up when the army tired of the Colonel's hippy ways and an intrusive member of the squad played by Kevin Spacey took over.

While the whole idea of the New Earth Army is laughable it's hard to tell sometimes just who the filmmakers are trying to make fun of. Spacey represents military capitalism of course and so is clearly played as the villain. The New Earth Army is shown as a well meaning, if flawed group.

McGregor and Clooney do share a decent chemistry together. There's a running joke between them referring to Jedi Warriors. McGregor's wide-eyed innocent is a gullible foil to Clooney's possibly deranged ex-soldier.

If the film had been played strictly as a comedy I might have enjoyed it more. Too often though it seems to be trying to make some kind of statement. The central idea is so ludicrous that they needn't have bothered. They should have really gone for it and made it an over-the-top silly comedy.

Most independent movies like this one these days seem to be trying for a certain quirky vibe. A little less quirkiness and a lot more jokes would have made for a better movie. 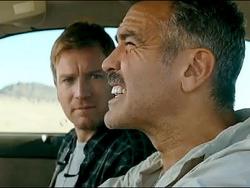 No real proof of the existence of any actual psychic powers were discovered.  They just chanted often, "Mother Earth, you're my life support system. As a soldier I must drink your blue water, live inside your red clay and eat your green skin. Help me to balance myself."  And of course, did drugs.

It is always a crutch for a writer to have characters do drugs in a movie.  With the simple reference to drug use, you put the audience in a position to question everything a character does or says.  Is Lyn telling the truth or is his memory screwed up from the drugs?  Either way I never cared.

Scott is right about the uneven tone.  A scene near the end has Bob and Bill cause every soldier on a military base, in a war zone, to get high on LSD.  Had the film been more of a dark comedy it could have worked.  Since the movie opens with a Title Card stating, "More of this is true than you would believe."  I was thinking how stupid these idiots were for endangering the lives of these young Americans.

I am not sure why Scott wrote, "Spacey represents military capitalism of course and so is clearly played as the villain."  How does he represents capitalism in this story?  I just saw him as a jealous little bitch, who wanted to be the star hippy pupil, but had to take a back seat to Lyn.

The Men Who Stare at Goats fails in its tone, but it also fails in its goal.  Does it want us to laugh at an idiotic situation or sympathize with a lost soul?  Sometimes it wants us to do both.  The problem is that it fails on both accounts.  I had no sympathy for anyone on screen.  Without a sympathetic character, the story, true or not, is moot.

George Clooney, Kevin Spacey, and Nick Offerman in The Men Who Stare at Goats.

I don't know how much of this story is true but The Men Who Stare at Goats was based on the book of the same name by Welsh journalist Jon Ronson. The release of the book was accompanied by a three part television documentary that aired on the BBC in 2004. The reporter played by Ewan McGregor is based on Ronson. The characters played by George Clooney and Jeff Bridges were also based on real people.

I disagree with my brothers on this one. The Men Who Stare at Goats is one of the funniest movies of the last ten years. It's an antiwar comedy in the tradition of Kubrick's Dr. Strangelove. It points out the absurdities of the war machine without being truly insulting to the United States military. It takes the seed of a ridiculous truth and nurtures it into a memorable satire featuring some humorously clever lines.

At one point Cassady explains to the reporter, “Once you understand the linkage between observation and reality then you begin to dance with invisibility.” Or when he talks about a technique called Dim Mak where an enemy can be killed with just a light tap. He mentions a guy he knew who received the death touch and died. The reporter asks, “Then and there?” “No. About eighteen years later. That's the thing about Dim Mak... you never know when it's gonna take effect.”

Clooney's earnest delivery is perfect. His entire performance is wry comedy gold. Not since Cary Grant has such a handsome leading man been so adept at mugging for the camera. Like Scott I also appreciated Jeff Bridges. Check out the twinkle in his eye when he reveals to the nonplussed reporter that he put LSD in the water supply as well as in the powdered eggs. The climax where the entire platoon is dosing is hilarious.

The ending of the movie is pure fantasy. Clooney and Bridges ride off into the sunset together in a helicopter, never to be heard from again. The reporter's big story is reduced to a television news punchline, but he successfully runs through solid matter. At just under 90 minutes the pacing couldn't be better. The mix of action and comedy is terrific and there isn't a bad performance in sight. I've seen this movie twice and I enjoyed it more the second time around. I believe The Men Who Stare at Goats will one day be considered a comedy classic.