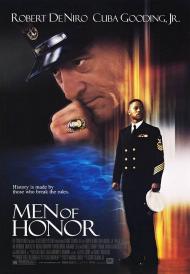 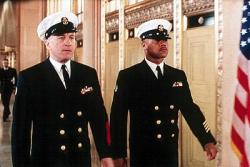 For anyone who has ever felt they have been oppressed or held back in life due to circumstances beyond their control should watch this film. The lesson here being that you do not get ahead by complaining about the obstacles put in your path. You succeed by determination, diligence and over coming those obstacles.

Men Of Honor tells the story of the first black American Navy Diver. At every step of his journey he is met with bigotry, ignorance and men who want the status quo to not be changed. His patience and resolve are constantly being tested.

Cuba Gooding Jr. stars as Carl, the sailor with a mind set to break barriers. He won an Oscar for his over the top performance in Jerry Maguire. This, however, is the movie he deserves the Academy Award for. His performance is extremely touching and very sincere.

Robert De Niro has recently made a couple of good comedies, Analyze This, and Meet The Parents. Drama is what he does best and where he truly belongs. De Niro plays the drunken Master Chief who, for some unexplained reason is married to the much younger Charlize Theron. De Niro's Chief at first attempts to persuade Carl to quit the dive school but later becomes his biggest supporter.

The movie tells two stories simultaneously. One of a man trying to overcome racial stereotyping and one of a man frustrated by his inability to do what he wants. Both men want to be divers and each has their own crosses to bear.

The movie slips occasionally into some heavy melodrama at times. The scenes with Carl and his father seem a bit contrived. But this is the true story of a mans life shrunk down to just over two hours.

A great story with great performances. 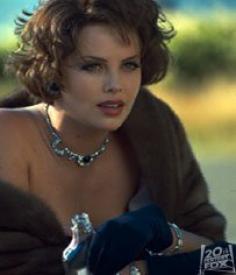 Charlize Theron in Men of Honor.

Eric has left me little to add because I agree almost 100% with his review.

The film's message of hard work and dedication winning through over ignorance is done well and with the minimum of melodrama. It only spills over, as Eric mentioned, in the scenes between Carl and his dad and also at the end in the courtroom.

Cuba Gooding Jr. gives the best performance of his career with this role. De Niro chews up the scenery as the tough as nails, old school Navy Master Chief and deserves a Supporting Actor Oscar nomination. The scenes which feature the two of them are the best and greatest scenes in the movie. So great in fact, that when there is a scene with just one of them, the movie suffers for it.

The movie does have some flaws. Charlize Theron's character is given no background and her relationship with De Niro's character is never fully explored. Just why this gorgeous socialite is married to this crusty, drunken, old sea dog is not even touched upon. Still this doesn't detract from the overall greatness of this film. 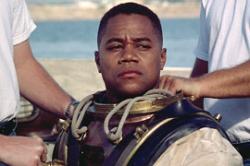 The old adage that fact is stranger than fiction was never truer than in this movie. A boatload of screenwriters would be hard pressed to come up with a more amazing and uplifting story. Initially because of blatant racism and later due to a physical handicap, the story of the United States first African American navy diver is truly astounding and inspiring. For sheer guts and determination I can think of very few human experiences which can compare. I agree with my brothers that both Cuba Gooding jr. and Robert De Niro give Oscar caliber performances.

In most movies of this genre there is one pivotal scene or montage of scenes where the opposing characters become friends. Men of Honor keeps its integrity in that it takes years for the racist character to accept and finally respect the person he initially hated. It is not so much that the De Niro character now embraces all people of color, but simply that he has grown to respect and even like one man because of this man's determination, courage and honor.

Men Of Honor is great entertainment.