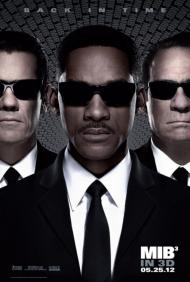 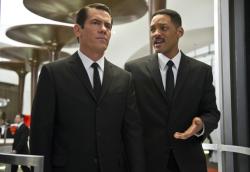 Josh Brolin and Will Smith in Men in Black III.

Wow, has it really been 15 years since the original Men in Black was released? Man, the 1990s are starting to seem like a long time ago! It was released in 1997 to huge box office receipts, becoming the second highest grossing movie of the year, behind only the juggernaut that was Titanic. It was fresh, it was funny and it cemented Will Smith's position as a box office champion.

Surprisingly it took five years for a sequel to appear. MIB 2 wasn't nearly so well received, although it did earn nearly $200 million. The freshness and the spark of the original seemed mostly absent, despite the undeniable chemistry that still existed between Smith and Jones. The disappointed reaction to this follow up seemed to sound the death knell for the franchise.

Finally, 10 years later, we're getting another installment. The good news is that it is a nice improvement over the previous film. It never reaches the classic status of the original, but it is fast paced, funny in spots and entertaining. It's a lightweight movie that seems to be aiming for the family market, with plenty of humor for the kids, which may be a result of Smith now being a father.

The movie opens with the escape of Boris the Animal, an alien prisoner, from a maximum security facility on the moon. He wants revenge on Agent K (Tommy Lee Jones), who shot off his arm and imprisoned him back in 1969. Boris decides to travel back in time to kill K before that happened and before you can say, "Austin Powers", Agent J (Will Smith) travels after him back to the 1960s.

Jones, who's now in his mid-60s, has had his part much reduced for this installment, but it doesn't feel like it. He only appears in the first 15 minutes and the final few moments. The reason it doesn't feel as though Jones is gone is because when J arrives in the past, a much younger Agent K is played by Josh Brolin who doesn't just do a Tommy Lee Jones impersonation, he perfectly embodies him. You immediately accept that they're the same person. It might be the greatest casting job ever of the same character to be played by two different people at different ages.

Although he's no longer the young hotshot that he was, Will Smith still has charisma. He proved in a few dramatic roles in the early 90s that he could do serious acting, but this is Smith back in cocky, charming mode. His light hearted banter plays off nicely against Agent K's stoicism in any decade.

Sure, the movie's not perfect. Some of the humor seems to be aimed at kids and doesn't always work. The emotional twist ending is telegraphed way in advance and feels sort of tacked onto the plot. These are just minor grievances though and did little to detract from my overall enjoyment.

I'll admit I was skeptical about the prospect of another Men in Black movie, but now I'm glad they decided to make it. I'm not saying I want them to revive the franchise into an ongoing thing, but it's nice for the series to go out on a high note instead of ending it with the disappointing Men in Black II. 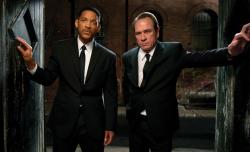 Will Smith and Tommy Lee Jones in Men in Black III

Scott wrote about how long it took to come out with the sequels, and I believe the amount of time between this and the second film have hurt the franchise.  The pay off for this film is not the big action sequence but a sentimental one.  Having spent too much time away from K and J reduced the emotional pay off.

With that said, it is great seeing Will Smith back in his best role.  We could debate all day how adequate he is as a dramatic actor, but in a role like this he is second to none.   Smith is so damn charming in this role.  He is in his element.  Put him in a room of rappers and he becomes the nerd.  Put him with suit wearing old people and he is the brightest, most charming person in the room.  His insults are more endearing than rude and his smile is infectious.  Why does he not do more comedies?

According to two different sites, Jones is actually in his 70s.  As is said in the movie, "I am getting too old for this."  Josh Brolin, who has proven to be a good dramatic actor, now shows he can do comedy as well, if the role is right.  As Scott wrote, it is perfect casting.

The story seems to take a little while to get going.  We have a couple of scenes with J and K that have very little to do with the eventual plot.  In one scene they go to a restaurant where the owner is in trouble for feeding humans, alien food.  They know the guy is shifty, yet they stay and eat dinner?  The whole scene is edited poorly and does not make much sense.

Men in Black III is full of special effects and contains several action sequences.  Most however, are not at all tense or all that exciting.  The best moments are provided by Smith, with his jokes and concern for his partner.

The last few scenes are easily the most memorable part of the film.  J and K fight an alien at the launching of the first manned space ship to the moon.   (Remember when our government used to do those things before President Obama cut NASA's budget?)  The emotional pay off comes right afterwards, and as good as that scene plays out, it would have meant more had this film come out seven years ago. 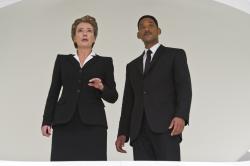 Emma Thompson and Will Smith in Men in Black III.

Eric, since you brought up President Obama in your review, I'll just take a second to say how glad I am the American people got it right and reelected him. Now for the movie... I've always felt the second MIB got a bad rap. Granted it was inferior to the original but it's still an entertaining movie. Now having said that, I do agree with my brothers that this third installment marks an improvement over that one. I certainly enjoyed revisiting these classic and very familiar characters and the script this time around, while retaining the fun humor of the first two, adds some heartfelt, character developing revelations about Agent K and Agent J.

As for the question of Tommy Lee Jones' age, according to both Wikipedia and IMDB he was born September 15, 1946, so he turned 66 in 2012. Agent K, however, is now in his 70s according to the logic of the movie. His younger self tells Agent J that he is 29 in 1969, which means he is 72 the year of this movie's release. Eric, it is Agent J that says, “I am getting too old for this. I can only imagine how YOU feel.” to agent K. Thus acknowledging not only that Tommy Lee Jones is old but also that Will Smith is now over 40.

Like everyone else that's seen this movie I was amazed by Josh Brolin's uncanny portrayal of the younger Agent K. From the moment he repeats the words first uttered by Tommy Lee Jones in the original movie, “We'll take it from here.” he perfectly embodies the character, voice and mannerisms of the older actor. He also proves to be quite adept at comedy.

Scott, I didn't think the emotional twist felt tacked on. It's an integral part of the story that takes the relationship between J and K to a more meaningful level without getting too sappy. As much as I liked this added poignancy I still enjoyed the humorous aspects of the movie best.

One of my favorite scenes is near the beginning when K and O deliver the eulogy for the deceased Agent Z. K says, “Z was my superior. In all the years I knew him, he never gave away anything personal about himself, nor did he invite me to his house. Thank you.” Agent O gets her turn, “When Z, my superior, passed away, I conveyed the news to the Ambassadress of the Centauri, whose response was as follows...” (she then proceeds to start making strange, high-pitched screeching sounds). Emma Thompson makes a nice addition to the cast as Agent O.

After a 3½ year absence from the screen, Will Smith hasn't missed a beat. He steps effortlessly back into that black suit, skinny tie and Ray-Bans. He is one of those great comic movie stars gifted with the ability to make dialogue funnier than how it appears on paper. For example, take the scene where he sees a really ugly alien fish. The line as written is, “Ooh. You look like you come from the planet... Damn.” That's not funny to read, but Smith's delivery makes it a laugh out loud joke.

Men in Black III is cinematic comfort food in its most pure form. It's as fun and familiar as two scoops of vanilla ice cream on a slice of homemade apple pie eaten in Grandma's kitchen on a sunny summer day. 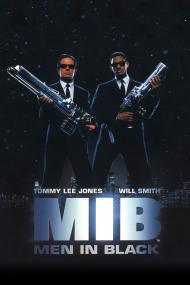 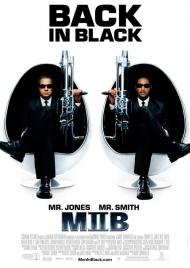