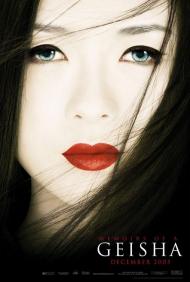 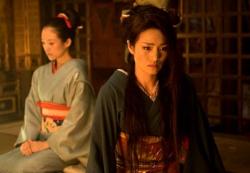 Memoirs of a Geisha

Sometimes bad reviews help make a movie more enjoyable. From everything I'd heard about Memoirs of a Geisha, how it went from Oscar front-runner to box office flop, I expected to dislike it. With those lowered expectations, I found that it wasn't nearly as bad as I feared and was quite beautiful to look at it. Its greatest sin is simply being a little dull at times, something that's amplified by a long running time.

The story is, as its literal title suggests, (big surprise!) the memoirs of a geisha. It details how young Sayuri Nitta was sold by her parents into a geisha house. It covers her years of growing up in this difficult world, her short-lived triumph as a celebrated geisha, and then into World War II and beyond.

Central to the story is a man Sayuri meets when she is still a young girl. His one act of kindness, buying her an ice cream, causes Sayuri to fall in love with him and inspires her to become the best geisha ever so that he might someday fall in love with her. Years later they do meet again, but circumstances keep them apart and their love consists mainly of repressed emotion and lingering glances.

While the love story doesn't set any fires, the costumes, production design and cinematography certainly does. As you might expect from Rob Marshall, the director of Chicago, the movie looks fantastic. It certainly deserves the numerous technical Oscar nominations that have been heaped upon it.

If only as much care had put into making the story as interesting as the visuals. It's not the fault of the actors, who turn in quite good performances. Nor is the basic story the problem, as it certainly contains all the elements of a great movie. It is in the execution of the story where the movie falters. It is very slow paced and the perspective is very detached.

Some of the geisha traditions seem very archaic by today's standards. The auctioning off of a geisha's virginity, after being verified by doctor of course, is one such tradition. And yet the movie takes no stand on the issue, presenting it neither as part of the geisha's mystique or condemning it as mere prostitution; all well and good for historical accuracy perhaps, but pretty dull from a story perspective.

The movies' great weakness though, is clearly the love story. Rhett and Scarlett these are not. There is no heat or passion between them. They don't even really know each other. Without the main characters creating any passion, it becomes hard for the audience to care.

While pretty to look at, this movie just never grabs a hold of you enough to make you care how it will end. 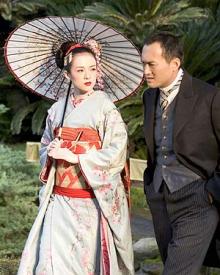 Ziyi Zhang and Ken Watanabe in Memoirs of a Geisha.

Memoirs of a Geisha is old fashioned Hollywood melodrama that never quite attains the grandeur of an epic. It's epic in length but not in scope. Director Rob Marshall keeps the focus intimate. The story is told exclusively from the point of view of the titular geisha. We see her life from a poverty stricken child to her years spent in servitude, her training and emergence as a geisha, her brief reign that is interrupted by the war, her reemergence as a geisha, and finally to the music swelling final scene. The drama really escalates during the third act and the denouement is romantic as hell.

Adding to its classic Hollywood feel is the fact that the majority of the movie was shot on sets and soundstages. The actual city of Kyoto, Japan was deemed too modern (although they did film a couple of scenes there) so they recreated an early twentieth-century geisha district on a ranch in California. As Scott wrote, the look of the movie is flawless. It's a sumptuous feast for the eyes from beginning to end. It was certainly deserving of the Oscars it took home for Cinematography, Art Direction, and Costume Design.

Both this movie and the book on which it was based caused some controversy in parts of Asia. The novel by Arthur Golden listed the name of the real life geisha he had interviewed. This was against her original agreement to speak with him only under the condition of anonymity. As a result of the book's publication she allegedly received death threats. She sued for damages and eventually settled out of court with the publishers. The movie caused a much more widespread controversy when it was announced that three of the central roles would be played by Chinese actresses. This didn't go over too well in China due to their incredibly volatile past relationship with Japan. According to the producers of the movie hardly any Japanese actresses showed up for auditions, while the actresses chosen were bigger stars in Japan than any Japanese actresses.

I personally enjoyed Memoirs of a Geisha but it does move along at a very leisurely pace. There are several memorable episodes. In one humorous scene the young Sayuri is being trained in the art of being a geisha by an older geisha named Mameha. One day as they are walking down a crowded street Mameha says, “You cannot call yourself a true geisha until you can stop a man in his tracks with a single look.” She then proceeds to demonstrate. When Sayuri is told to attempt this she glances at a man on a bicycle. She catches his eye but in the process causes him to crash into another person.

Sayuri overcomes many obstacles. She has two enemies. One is out in the open while the other is duplicitous. There is a bit of symbolism used to represent each of the four main geisha's. Each has an element. Sayuri is water, Mameha is wind, Pumpkin is wood and Hatsumomo is fire. I agree with my brother that the acting is quite good by the entire cast and that the movie doesn't really take a moral stand on the society it depicts. Perhaps since both the author of the book and the director of the movie were Westerners they were careful not to offend the Japanese culture. And while it is true that being a geisha did include having sex with paying clients it was so much more than that. It was a culture all its own with rituals, traditions and the developing of talents like singing, playing an instrument and dancing. Compared to a common prostitute being a geisha was the difference between a five course gourmet meal and a burger from McDonald's.

Sayuri's main protagonist is Hatsumomo. She torments the young Sayuri when she is still a servant, and treats her with disdain saying, “I'm afraid these days even the common chambermaid can call herself a geisha.” Hatsumomo is consumed with jealousy after Sayuri usurps her place as the most celebrated geisha in the district. After the war Sayuri echoes Hatsumomo's sentiments when she laments the coarsening of society. “Any streetwalker with a painted face and silk kimono could call herself a geisha.” She narrates.

Memoirs of a Geisha is a beautifully crafted soap opera. If you're into that sort of thing you'll probably like this movie, if that's not something you like be prepared for a long slow slog.

The eyes have it. Ziyi Zhang in Memoirs of a Geisha

The only interest Memoirs of a Geisha held for me was the possible insight into this hushed occupation. The information revealed in this film and what I found on line is a bit vague on what exactly a Geisha’s job description actually was. The easiest answer is that they were hostesses/entertainers. They served tea and played an instrument to entertain wealthy men.

The big question is whether or not they could be considered prostitutes. None of their customers were ever women. The film has a moment where a Geisha tells Sayuri that she believes her sister is at a “Pleasure house,” clearing meaning a whore house. It also implies that they are not at one. However, as Scott mentioned, the purchasing of a girl’s virginity is in fact an act of prostitution, making these women sex workers of a sort, whether it be innocently flirting from behind a fan or being forced to have sex.

It was after World War II when the Geisha truly earned her sexual reputation. As with many women in occupied Germany, some Japanese girls used their natural endowments to survive the aftermath of a war that had devastated their country. There is some debate as to whether ordinary girls dressed as geishas to please paying soldiers or Geishas turned to outright selling of themselves to make ends meet. The truth is probably a little of both.

Like my brothers, I found it frustrating that this film did not know what it wanted to say about geishas. Sayuri was sold like a slave by her parents to become a geisha. That sucks but there are plenty of positives here. She was given a place to live, taught a trade and plenty of nice clothes to wear. Considering she had dirt poor parents who sell their children to strangers, I think she ended up in a better place. Okay, she was confronted by a man who wanted more than light conversation, but I still think she did better than staying with her original uncaring family.

The love story takes far too long to resolve and only serves to demonstrate the loneliness of the geisha life. Look at the one geisha early on who has to meet with her boyfriend in secret. I read that a geisha could not be married. If she did accept a proposal, she had to leave the profession and face the wrath of her boss who may demand her fiancé buy out her contract, so to speak.

Either way, this movie bored me throughout much of it. It was not titillating in the least, and let’s be honest, that is what these girls were supposed to be. Note how Sayuris’ looks are scrutinized before being purchased at the geisha house. These girls may have played instruments but it was their sexuality that brought the men in and it was what attracted me to this movie.