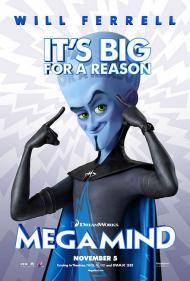 Will Ferrell is Megamind in Dreamworks' Megamind.

Reportedly Megamind is based upon the idea of what would happen if Lex Luthor ever actually did defeat Superman.  Of course it's done in animation with different characters standing in for Supes and Luthor.  It's also done in a children's cartoon, although it does throw in a few references for the grownups and it does manage to entertain no matter what your age, even if it never really breaks any new ground or truly becomes all that super.

Will Ferrell provides the voice of Megamind, a blue headed, evil genius who was saved from his homeworld by his parents who sent him off in a spaceship as a baby where he landed on Earth.  Another family had the same idea and sent their baby to Earth at the same time where their baby eventually grew up to be the heroic Metro Man (Brad Pitt), hero of Metro City.  Megamind, who grew up inside a prison, where his spaceship landed, is Metro Man's archnemesis.

When the movie opens, Megamind has hatched another "brilliant" scheme to destroy Metro Man.  He uses the reporter, Roxanne Ritchi (Fey), as bait.  No one is more surprised than Megamind when his evil plan works and Metro Man walks right into Megamind's trap.  Without his nemesis though, Megamind finds that life seems to lose some of its pizzazz and he starts a new plot to bring another hero into existence to take Metro Man's place, but will he have any better luck with this one?

I often wonder at the wisdom of paying large paychecks to big name stars to do the voices in cartoons.  Clearly the practice is aimed at the parents because the kids in theater I saw this with certainly didn't care if that was Tina Fey or Brad Pitt doing a voice up there.  And honestly, any unknown voice actor could have played their parts, particularly Pitt's, who is only in a very small part of the film.  But I suppose it gives the marketeers something to promote to the grown-ups.  "Starring Will Ferrell and Brad Pitt", has a certain ring to it.

Ferrell does do a good job in the lead role.  I particularly enjoyed his Marlon Brando impersonation, ala Jor-El in the Christopher Reeves' Superman movies.  With Megamind being the "villain", but really the hero of the movie, it's important that you empathize with him and Ferrell does bring a likability to the part and a certain charm.

Unfortunately for this movie, it follows the similarly plotted Despicable Me from earlier this year.  This does make some of the jokes seem less fresh here.  Both movies feature an evil genius as the hero and both of the genius's have an army of minions, although Gru's minions were cuter and funnier.

Although I spent the extra few dollars to see this movie in 3-D, it added nothing to the experience.  Hollywood is churning out way too many 3-D films without bothering to justify the cost or the uncomfortable glasses.  Save your money and see the 2-D version.  You'll still see the same story, with the same jokes and you won't really miss a thing. 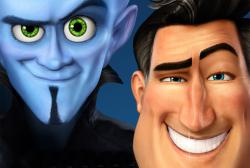 The value of celebrities voicing the roles is a good question.  Ferrell does a great job as Megamind, but without the publicity, I would not have guessed it was him.  The same with Tina Fey.  Any female voice would have sufficed.  As far as Metroman goes, I never realized Brad Pitt sounded so much like George Clooney.  Besides Ferrell, the best voice work was Jonah Hill.  He is the perfect choice to voice an over weight slob.  It is Hill's stock character.

Megamind does for the superhero genre what Enchanted did for the princess movie craze.  It takes to task it's basic theme.    Enchanted mocked the ludicrous notion of a girl so pure and sweet, by virtue of being born royal, that birds respond lovingly and obediently to her.  In Megamind we see the pointlessness of a supervillian being captured, escaping and captured again.  Exactly who would complain if Batman actually killed Joker once and for all anyway?

After Metroman discovers that Megamind has kidnapped Roxi, he sounds almost bored when he says to Megamind, "We all know how this ends: with you behind bars!"  It is those kind of lines that make this movie stand out.  My favorite is when Megamind is narrating, "Our battles quickly got more elaborate. He would win some, I would ALMOST win others! He took the name: Metro Man, defender of Metro City. I decided to pick something a little more humble: Megamind,..."

The biggest plot change to the genre is how the romantic triangle plays out.  I like the break from tradition, but it could have been played up for more laughs.  Like the 3D, it is not used to it's full potential.   Megamind is a good animated mockery of the superhero genre, but it could have ran a bit further with some of the jokes.