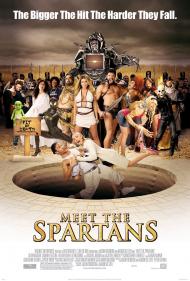 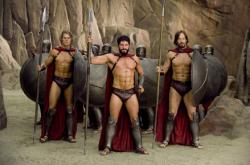 Meet the Spartans, or better yet, don't.

With Meet the Spartans, Aaron Seltzer and writing partner Jason Friedberg are finally moving in the right direction with their film parodies. This movie centers almost entirely on just one movie, 300, and not an equal scatter shot of dozens of films. The best jokes are the ones that rip on 300 and the worst are the ones that use other references. Okay, I did laugh at the Brittany Spears jokes, or as the movie puts it, "It's Brittany, bitch!"

English actor Sean Maguire does a great job as Leonides. He looks the part, painted on abs and all. Meet the Spartans follows the plot of 300 fairly closely. It begins with Leonides growing up to be king of Sparta. He trains his son just like they did in 300, only he includes WWE type body slams and hits his son with a chair. The jokes work well when they exaggerate the plot in 300. When the messenger arrives to discuss Leonides's surrendering, Leonides tells him, "Lets go talk by the pit of death." to which the messenger cheerily responds, "Okay."

When Leonides's second in command gathers his army of 13 and not 300, he tells him he got the men that fit his requirements. The are all good looking and hung. The movie is full of gay jokes about these guys. Come on, a bunch of muscular men running around in leather Speedos are just asking for it. Gay jokes that is. The men skip everywhere. It's a running joke. Or would that be a skipping joke?

The jokes miss whenever another movie reference is thrown in. Carmen Electra turns into Spiderman in a completely pointless scene, but the worst moment comes when the 13 do battle with an army of Xerxes by dancing. The Stomp the Yard joke dries up in seconds yet it drags on for minutes.