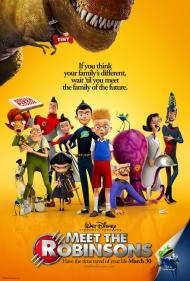 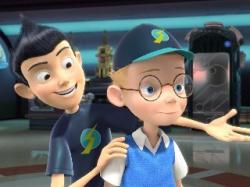 Meet the Robinsons felt more like an extended television series pilot than it did a movie. There are so many characters and ideas introduced that you could easily see Disney trying to use this as a platform to launching it as a franchise. This might work out to their advantage in the long run, but in the short run, it doesn't do this movie any favors. Rather than the clear cut, simple plot that most cartoons need, there's too much distracting noise that doesn't really have anything to do with the plot.

The story centers around Lewis, a 12 year-old orphan who spends most of his time inventing things. His latest invention is a memory scanner, which he intends to use to scan his own memory to discover who his real mother is so that he can track her down and discover why she left him on the steps of the orphanage. It is this invention that attracts the attention of two mysterious characters; the sinister (if bumbling) man in the bowler hat and Wilbur Robinson, a young boy from the future who's trying to track down a stolen time machine that the man in the bowler hat has stolen.

Lewis is quickly caught up in Wilbur's problems, which leads them both back to the future where Lewis meets Wilbur's extended and eccentric family, which aren't (unfortunately), as funny or even as fun as the writer's of this movie think they are. He also learns that there's a connection between himself, the Robinsons and the man with the bowler hat, but will he learn what it is, in time?

While I did enjoy parts of this movie, too often it seemed like just a bunch of ideas thrown on the screen to see if some of them would stick. The villain and his killer bowler hat named Doris are the funniest characters. But, for instance, there are a bunch of singing frogs that live in the Robinson's mansion, who, for some reason, behave as if they're all in the rat pack. It's a joke worth a chuckle at first, but there's no real reason for it, or for the octopus butler, other than to be bizarre.

The animation isn't particularly exceptional and you can see why Disney bought Pixar. It's not that it's bad, it just lacks the innovation that Pixar brings to their productions. Along with the normal version of this movie, there's also a 3-D version and it's easy to see in the 2-D version which scenes were included because they'd look good 3-dimensionally. I'm thinking of one extended chase scene near the end of the movie, in particular.

I've certainly seen worse cartoons, and I can't say I was bored while watching it, but overall, there's just nothing all that memorable about Meet the Robinsons. 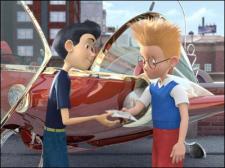 I am constantly writing how Disney is repetitive in it’s cartoons when it comes to family dynamics. Hardly any children in Disney movies are in a family with both of their orginal parents. Meet the Robinsons is no exception. Lewis is an orphan who ends up finding a bizarre family that he wishes greatly to be a part of. Question to Disney; Are children of traditional families not interesting enough to make a movie about?

Anyway, the Bowler Hat Guy is the funniest character. I laughed hardest when he is asked by the CEO of an invention company what he wants to accomplish with his invention, and the Bowler Hat Guy responds diabolically, “...crush the dreams of a young orphan boy.” My favorite line of his though is, “Hmm, let's see... take responsibility for my own life or blame you? Dingdingdingdingding! Blame you wins hands down!”

The dialogue has a few bright moments but I was ready to barf when the line, “Keep moving forward!” was repeated countless times. It is supposed to mean “never give up”, but it sounds more like a liberal catch phrase.

Meet the Robinsons is not Disney’s best film, nor is it their worst. It tries hard to distract you with a quick pace, tons of pointless characters and a nice gooey ending. As Scott alluded to, this movie owes a debt of gratitude to Back to the Future, but then again, Marty actually came from a traditional family.

Eric, you are so concerned with the fact that Lewis is an orphan that it seems you missed the entire point of the story. Being raised in an orphanage made Lewis realize just how important family is. It gave him something to pine for and strive for. Complaining that he is an orphan is like complaining that the hero of a rags to riches story is poor at the beginning. It makes no sense.

Having the central character in a fable be an orphan is the oldest plot device in the world. It has nothing to do with Walt Disney!! It goes back through all the classic fairy tales all the way to ancient Greece and probably back to the caveman era as well. It gives the reader or audience member immediate empathy for the protagonist if they have a sad fate in life to overcome. You don't start the story with... “Once upon a time a young boy lived happily with both his parents.” It just doesn't play.

And one more thing. The director, Stephen J. Anderson, was himself an orphan. After reading the screenplay he jumped at the chance to direct this movie as he had personally experienced many of the feelings Lewis has such as wishing to belong, and not feeling wanted. He also provided several of the characters' voices.

But I agree with both my brothers about the fact that this movie is a bit of a muddled mess. Sure it's fast paced and clever with a wacky assortment of characters and an uplifting pro-family message. But no matter how fantastical it is, imagination without whimsy is like dough without yeast. It doesn't rise. Oh and Eric, just like in Back to the Future, Wilbur (who is actually the Marty character) came from a traditional family.