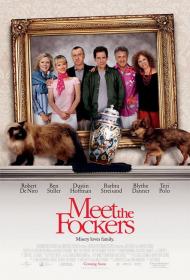 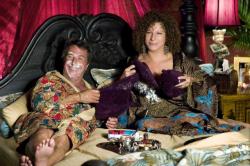 Dustin Hoffman and Barbra Streisand in Meet the Fockers.

Meet the Fockers picks up right where Meet the Parents left off. Gaylord (Greg) Focker and Pamela Byrnes have been engaged for two years and they plan to wed in the fall. The only thing left to happen is for the in-laws to meet.

The casting coup of the millenium results in this delicious duet between Dustin Hoffman and Barbra Streisand as Greg's parents, Bernie and Roz. Their chemistry represents the high points in this, Streisand's seventeenth, movie. They really seem like an old married couple and have some of the funniest bits together. The whipped cream in the cleavage scene made me crack up.

And although De Niro's Jack has some male rivalry with Bernie, it is in Roz that he finds his true equal. In the Focker household the sex roles are reversed. She is the breadwinner (as a sex therapist for seniors) while he is the stay-at-home dad. Bernie is the one who nurtures Greg while Roz gives him sex advice. The contrast between the open-hearted, free-spirited and randy Fockers and the reserved, uptight, sexually-repressed Byrnes is the stuff of great comedy.

Barbra Streisand (in her first big-screen appearance in eight years) recaptures the classic comic persona of her early movie career. She looks like an aging Esther Hoffman and it's not too much of a stretch to imagine Doris Wilgus from The Owl and the Pussycat morphing - over the decades - into Roz Focker. Dustin Hoffman is perfect as Bernie. Why haven't they made a movie together before now? Hopefully this won't be the last one.

I'll leave it to my brothers to be more in-depth, all I'll say is, "Welcome Back Barbra!" 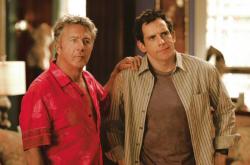 Dustin Hoffman and Ben Stiller in Meet the Fockers.

Patrick mentions at great length the chemistry between Streisand and Hoffman, which is to be expected considering how much of a Babs fan he is. But the truth of the matter is that he's correct in doing so. They are definitely the highlight of this sequel, which like most sequels, isn't quite as good as the original.

Meet the Parents covered the dread of meeting the in-laws as personified by De Niro's intimidating ex-CIA agent father in-law. Meet the Fockers is more about the embarrassment of introducing people you care about to your own eccentric family. And who can't relate to that? Who hasn't dreaded that their mom will drag out the old family photo album complete with the ghosts of bad hairdos past? Of course this movie takes it to the extreme when accompanying a photo of Gaylord's circumcision, is a piece of his foreskin saved in the album.

And so, where in the first movie most of the jokes came from Stiller and De Niro's interactions, in this movie the humor results from De Niro interacting with Streisand and Hoffman. The Stiller/De Niro relationship is pushed to the side and it becomes clear who the real stars of the movie are. Although Stiller does get a few laughs, he's simply outclassed by the supporting actors. And Stiller's fiancée (Polo) has to be one of the most thankless roles ever written, as she is one of the only straight characters in the movie.

Meet the Fockers is an amusing romp, but it could easily have had 20 minutes trimmed from its 2 hour running time and it would have been much improved. And the ending is a little too happy and resolved with at least one character having way too big a change of heart. 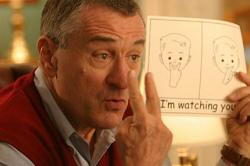 Change of heart indeed! This film is so liberally biased it actually ruined what could have been a great movie.

The Byrnes are a conservative family to an extreme degree. Jack doesn't like to be touched and fixates on schedules and order. However, the Fockers are just as extreme to opposite direction. Bernie starts a toast to his future in-laws with a story about his vasectomy. Dinner conversation with near strangers is their son's loss of virginity. Patrick, of course, only sees flaws with the conservative Byrnes. Both of these couples could benefit by moving a bit closer to the center.

By the end of the movie, in typical Hollywood fashion, only the conservative is the one to change. The holier than though liberal characters are simply shown as being the all knowing, all loving couple. Even in the areas where Jack should be the better, such as the football game or the legal problem, he is upstaged by the liberal Bernie. A far better ending would have had both sets of parents admitting to being a bit obnoxious in their own way. Instead, we have the entire cast picking on the lone conservative character.

Politics aside, I laughed often and was very entertained. The awesome cast does a great job. The amount of acting seniority in this movie is staggering. How often does a movie get made with such awesome costars as Hoffman, De Niro and Streisand?

This movie has some good lines. "Our people don't kill ducks." Roz tells her son after finding out he went duck hunting with Jack. Of course the groom-to-be's last name is the butt of many jokes, such as when Jack says; "I don't like what I'm seeing from these Fockers."

Meet The Fockers has annoying liberal Hollywood politics, but its jokes are delivered well and often enough that I can almost overlook the bias. Almost! 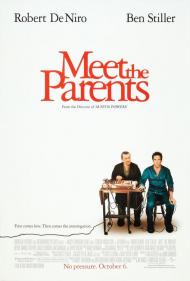 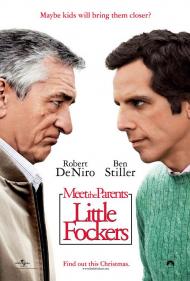