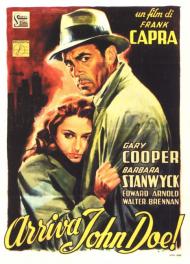 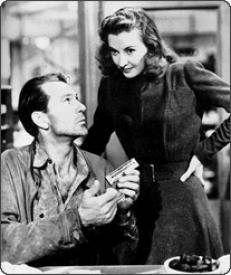 Frank Capra likes platitudes and speeches. James Stewart delivers some good ones in It's a Wonderful Life and Mr. Smith Goes to Washington. In Meet John Doe, every other scene seems to have a sappy soliloquy.

As a last act of rebellion for being fired from her newspaper, Ann creates a letter from a man who is going to kill himself on Christmas Eve to protest the state of civilization. Once the phony letter is published and read, there are outcries from the public in support of the "John Doe" who supposedly wrote it.

Ann and the editor hire an unemployed baseball player, Cooper, to pretend to be John Doe so as to keep the story alive. Once John Doe gives a speech, written by Ann, an entire movement of average Joes spring up around the country. The new owner of the newspaper jumps on this opportunity and decides to use John Doe's popularity as a springboard for political gain.

Meet John Doe contains elements from many of Capra's better movies. The newspaper reporter falling in love with the person they are writing about is straight from It Happened One Night. The political pontificating is from Mr. Smith goes to Washington,. The movie's Christmas Eve suicide attempt is directly from It's A Wonderful Life. However, all of those movies are much, much better than this one.

Meet John Doe is so heavy handed in it's message that it is like getting hit over the head with a baseball bat while someone is yelling in your ear to love your neighbor and country! There is one light scene were Gary Cooper plays a pantomime game of baseball in his hotel room. Unfortunately, it is just one brief moment in a series of melodramatic scenes.

The best this movie has to offer is the great Gary Cooper. Man, is he good! My favorite movie of his is The Pride of the Yankees (1942). In that movie, he represents an average Joe without being over the top about it. The best scene Cooper has in this movie is where he makes his first public speech. His performance is wonderfully subtle as you watch him go from being nervous and uncomfortable to being taken in by the very speech he is reading for the first time.

Cooper is great and Stanwyck is adequate. Capra however, has been better in many other films. 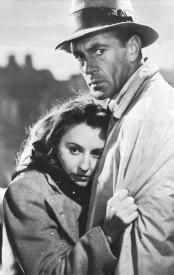 Barbara Stanwyck and Gary Cooper. Two of the all time greats!

Once again Eric, you are too harsh on a Frank Capra classic.  Meet John Doe may contain elements from several of Capra’s other movies, although I’m not sure how you figure “the movie’s Christmas Eve suicide attempt is directly from It’s a Wonderful Life” when that movie was made 5 years later. You did get one thing right however, and that is the heartfelt performance by Gary Cooper. He was perhaps the most subtle of all the great Hollywood stars of his day. You can actually watch him listening to the other actors.

The sentiment is a bit syrupy and poured on thick but that was Capra’s bread and butter. It’s not like this movie goes more overboard than his other classics. Barbara Stanwyck is a perfect match for Gary Cooper. They both had such sincerity and the ability to make corny dialogue sound fresh and ring true. Her character’s motives are a bit fuzzy at times but Stanwyck delivers some fine acting at the emotion packed climax.

Eric, again I disagree that this movie lacks light moments. Walter Brennan provides comic relief as John Doe’s paranoid people-hating, hobo sidekick known as The Colonel. He is always warning John about those “Helots!” The Colonel explains his outlook thusly, "I don't read no papers, and I don't listen to radios either. I know the world's been shaven by a drunk barber, and I don't have to read it."

The supporting cast is always good in a Capra movie and this one is no exception. Edward Arnold plays (what else?) the rich villain. Actually his D.B. Norton is a tad more subtle than Capra’s bad guys usually were. He’s corrupt and slimy but compared to the one dimensional Jim Taylor that Arnold played in Mr. Smith Goes to Washington or Lionel Barrymore’s Old Man Potter from It’s a Wonderful Life D.B. Norton is downright ambiguously evil.

James Gleason is also quite good as newspaper editor Henry Connell. He has one great scene where he gets drunk and talks about fighting in the First Word War alongside his father. He tells John Doe these inspiring, if slightly cryptic, words, "Lighthouses, John. Lighthouses in a foggy world." Meet John Doe marked the final screen appearance for silent matinee idol Rod La Rocque. He plays the small part of D.B. Norton’s nephew.

Capra’s movies always did walk the fine line between believability and absurdness and Meet John Doe certainly does at times. There is one particular plot point that sticks out as completely fantastic. D.B. Norton orders a new edition of his newspaper with headlines declaring John Doe a fraud. A world record is set in how fast this edition gets printed and out on the streets.

Spoiler Alert: Frank Capra filmed several different endings including one where John Doe actually jumps off the building on Christmas Eve. He eventually decided on a happy ending but was reportedly never completely satisfied with the denouement. Watch Meet John Doe and decide for yourself. 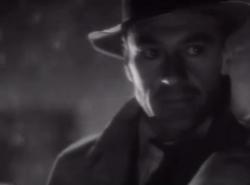 I agree with you Eric, Meet John Doe is the most over-the-top film from Frank Capra, a director not exactly known for his subtlety to begin with. His films often feature a central character standing up for Capra's view of the common man, but here John Doe borders on the messianic, practically starting a new religion. It's only a wonder that instead of the climax taking place on Christmas, it didn't end on Easter. It might not go more overboard than other Capra films, but it goes overboard in a much less entertaining way than his others.

For all the sermonizing, the message of the movie is so overly simplified as to just be silly.  John Doe's big message to the people is be nice to each other, something that apparently no one had ever thought of before, but once John Doe begins spouting it, everyone decides it's a good idea as if they'd never heard of it before.

I do agree with you Patrick that Stanwyck gives a strong performance. She shares a nice chemistry with Cooper, even in the rather odd and dated scene where Cooper describes a dream where he was her father and a minister and both of them were spanking her.  Certainly her tearful pleading on the roof in the film's climax is well done.

Likewise I agree with you both that Cooper gives one of the better acting jobs of his career and I'm not someone who's normally a big fan of his. Eric, your description of how he gives his first speech sums up his character's transformation over the whole movie. He starts off in it for the money, but is taken in by his own performance, until he truly believes it all.

My biggest complaint about this movie though is that it's all rather dull. It's heavy handed and slow paced without nearly enough comic relief. Yes, Brennan does provide some light humor, but he's not in it enough to make much of a difference. The whole thing drags along at a snail's pace.

Capra will never be my favorite old time director, but he definitely made better movies than this one. 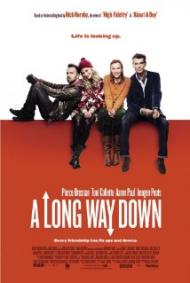