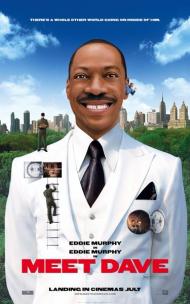 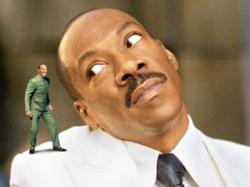 I have read that the box office returns for Meet Dave have been a surprising disappointment. My question is why is it a surprise? Eddy Murphy, a man of many theatrical talents, has not starred in a blockbuster in years, if not decades. Director Brian Robbins has had even less success having done such forgettable films as Norbit and The Shaggy Dog. The two credited writers of Meet Dave have only written for television, thus far. The only reason this film ever got the green light was because someone still has faith in Murphy’s fan base.

Murphy is a tiny alien from another planet sent to Earth to steal the salt from our oceans to save his home world. He, and a crew of a couple of dozen, ride in a spaceship that resembles a human (Murphy in duo roles) that they name Dave. They seek out a rock that was sent to Earth, for some unexplained reason. They meet and quickly befriend a single mom and her son. Meanwhile, a couple of policemen are investigating the crash and looking for Dave.

The movie tries for some messages about being yourself. All of the crew members start to act differently the longer they mingle with humans. One female crew member falls for the captain, while the head of security comes out of the closet.

This is supposed to be a comedy but it never elicits any laughs. Right after landing on Earth, Dave tries to walk for the first time. It is straight out of The Ministry of Silly Walks. If you recognize that reference, you have no business seeing this movie. If you have some extremely bored 10 year olds, who think Dave pooping money out of his butt is funny, then this may be the movie for you.