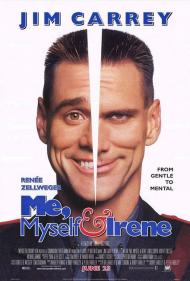 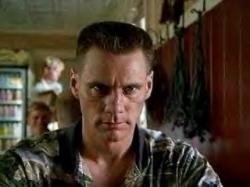 Our motto here at 'Three Movie Buffs', is 'We waste our money, so you don't have to'. And never was this truer then in the case of Me, Myself, & Irene.

The movie tells the story of a repressed and timid Rhode Island State Police Officer, played by Jim Carrey, who, after years of holding in his anger, becomes schizophrenic, with supposedly, hilarious results. It is his job to escort Rene Zellweger back to upstate New York to face certain trumped up criminal charges, but is really just an excuse for the Farrelly brothers to make another road picture.

With this setup, Carrey starring, and the Farrelly brothers directing, this sounds like the surefire formula for a very funny film. With all of these things going for it, on top of the anticipation of this movie, I found myself laughing at the beginning of this movie, almost by default. I expected to laugh, and therefore, I laughed, but after about an hour into this nearly two-hour movie, the laughs become few and far between, and without any great plot and only a lukewarm romance, there isn't anything else to keep your attention.

Carrey does his best with limited material, and Zellweger is appropriately cute as the female lead, but whatever chemistry they might have, was obviously reserved for their off screen relationship. The rest of the cast is eminently forgettable.

The Farrelly's direction and script seems rather timid after their previous films. Oh sure, there are a few shocking scenes, but overall you feel they aren't going far enough. The funniest scenes in the movie are when they go completely over the top, as in the case with the little girl in the fountain, and later with the wounded cow. Or perhaps they're just living with the problem of having to top themselves with every film, and are finding it harder to do with each movie. 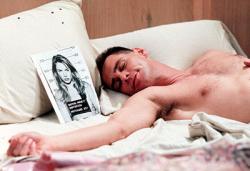 Like Scott, I found this movie to be disappointing. Although there are some mildly funny scenes featuring the Farrelly brothers trademark gross out humor (the chicken in the rectum shot comes to mind) overall this movie goes wide of the mark and with comedy a miss is as good as a mile.

The real problem is in the pacing, this movie starts at a walk and soon slows down from there. Carrey does give his all and in the process makes this movie slightly funnier than it would otherwise be. Overall, as Scott pointed out, the Farrelly's penchant for sight gags intended to shock is getting very tired (yawn) and should be put to bed.

Unlike Scott, however, I felt there was real chemistry between the two leads. Renee Zellweger looks at Carrey with the eyes of a lovesick teenager, unfortunately for most of the movie this seems out of place and misguided.

Other promisingly funny premises, such as Carrey's black sons, never live up to there potential. What, I wonder, would a gifted joke writer like Woody Allen have been able to do with this?

It seems we live in a world where cleverness has been replaced with "hit em over the head until they bleed" comedy. 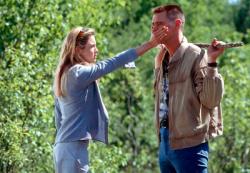 Renee Zellweger and Jim Carrey in Me, Myself, & Irene.