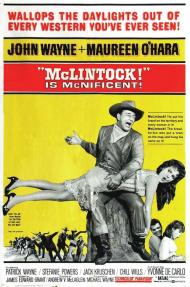 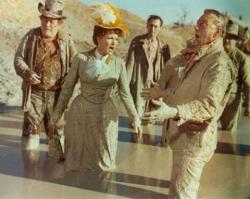 The early 1960’s marked the absolute peak of popularity for the enduring and prolific John Wayne. Incredibly, he saw a movie of his released in every single calendar year from 1929 to 1976, bar none. He was listed in the top ten box office stars from 1949 to 1974 and he stands alone as the most iconic American leading man in Hollywood history.

By 1963 he had perfected the John Wayne Formula. Often set in the Old West but not always, he played the father figure, usually a powerful and wealthy man from humble beginnings around whom the story revolved. He always had a taste for liquor and an interesting past. Throw in plenty of rough & tumble action, knock-about humor and a raucously happy ending.

McLintock! follows just such a blueprint but was very loosely based on Shakespeare’s The Taming of the Shrew. Wayne is George Washington McLintock, wealthy cattle rancher and land baron, richest man in the Arizona Territory in fact. The strikingly beautiful Maureen O’Hara plays his tempestuous wife Kate (although please call her Katherine). She has returned after two years back East and is itching for a fight with her husband. On his part GW is bemused by his wife’s actions.

There is a romantic subplot between their daughter Becky (please call her Rebecca) played by Hart to Hart’s Stefanie Powers and a ranch hand named Devlin Wayne hires, played by Wayne's real life son Patrick. This movie seems to endorse a man’s right to discipline his misbehaving female as both Wayne and his son spank their better halves. To be fair this is a lighthearted, slapstick-infused Western romp and both women get their share of abuse in towards the men as well.

The centerpiece of the movie, and its most famous scene, happens at a clay pit. A large brawl breaks out after an Indian is falsely accused of kidnapping a white girl and nearly gets hanged. Wayne says the movie’s most famous line to the girl's father after he starts a riot. “I haven’t lost my temper in 40 years, but pilgrim you caused a-lotta trouble this mornin’, might-a got somebody killed… and somebody oughta belt you in the mouth. But I won’t. I won’t. The Hell I won’t!”

McLintock! was the fourth of five movies teaming Wayne and O’Hara. It was a huge hit at the box office and the Duke continued making hit movies for another 13 years. He would reunite with O’Hara for the last time in 1971’s Big Jake. 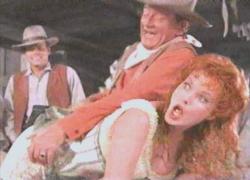 McLintock! is one of my all time favorite John Wayne films. This light hearted western romp has less traditional action expected in a western film, but it makes up for it in witty dialogue. With Wayne's best leading lady in tow, Maureen O'Hara, McLintock! is a delightfully entertaining romantic comedy.

Patrick mentioned the film's most famous line, but this movie has more where that came from. When addressing someone who keeps interrupting his speech, Wayne says, "Douglas, I come close to killing you a couple of times when we were younger. Saddens me I didn't."

The best moments are between Wayne and O'Hara. In their first scene together, O'Hara gets the first dig in with a reference to Wayne's drinking. They bicker constantly but are still madly in love. A moment later, Wayne steals a kiss, causing O'Hara to call him, "You animal!" Wayne unapologetically responds,"That's the story." When O'Hara arrives at the home they used to share, a footman asks where he should place her luggage. Wayne looks at O'Hara and instructs the man to, "Put them in the master bedroom." wink wink, nudge nudge. O'Hara however is not having that. She clarifies for the man,"Yes, but move Mr. McLintock's things to another room."

Although it is clear early on that Wayne is still in love with O'Hara, it takes a bit longer to see that she loves him in return. During the famous clay pit scene, a man confronts Wayne and Wayne seems to be taking it. O'Hara asks as if her pride is on the line, "How long is GW going to let that chee chucker push him around?"  A bit later when Wayne seems to be getting beat up, O'Hara moves in to defend him with hat pin in hand.

There is also the love story of Wayne's new hired hand Devlin and his daughter Becky. Their best moment comes when she tells Wayne, "You are my father and if you do love me you will shoot him." Wayne then proceeds to shoot him. I think Becky surely deserved her spanking.

The film also has some political moments, with Wayne making such statements as, "The government never gave anyone anything!" He also gives his son a lesson on how a man earns a living. The film also has a sub plot about the local Indians. One of the funniest moments is when an Indian says the fight at the clay pit is a party but he wants to know where the whiskey is. The Indian sub plot eventually leads to a shoot out near the end.

All the other goings on though, take a back seat to the real fighting between Wayne and O'Hara. After telling Wayne he has a stupid look on his face, Wayne responds, "I can't help this stupid look. I started acquiring it as you gained in social prominence!" The climax of the film is Wayne chasing O'Hara to give her the comeuppance she deserves. People speak of such classic on screen couplings as Hepburn and Tracy or Bogie and Bacall, but for my money Wayne and O'Hara had more fire and passion than all of them. 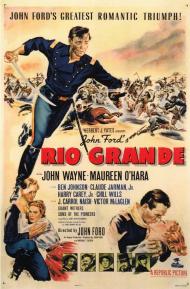 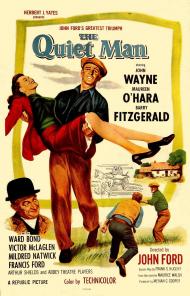 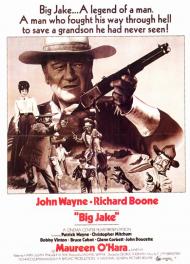