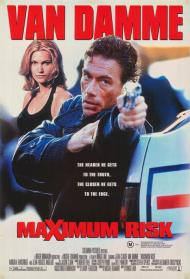 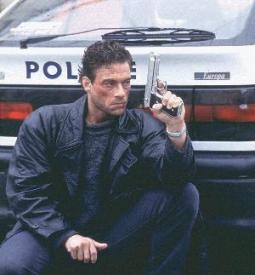 The early 1990s saw Jean-Claude Van Damme's career at it's height.  It peaked with Timecop in 1994, his most successful box office hit.  His films were all B-films with just the right amount of cheese.  You knew he would do some compulsory kick to someone's head or an obnoxious leg split.  His pretty boy looks and ridiculous accent all added to the over the top fun, that was by no means ever intended to be taken seriously.  His follow up to Timecop was the dismal Street Fighter, and his career never recovered.

Maximum Risk should have been a great JCVD film.  It starts with a action packed chase, that ends in his death.  Actually it is his twin brother, that he never knew he had.  Yeah, he had already used that gimmick in the campy Double Impact (1991).  JCVD plays a French police officer in Nice, who investigates his brother's murder.  This takes him to The United States, where he tangles with the Russian mob and falls for his twin's girlfriend, played by the gorgeous Natasha Henstridge, who goes topless for the sex scene.

Maximum Risk had a choice of two directions to go in.  The first was to continue in the JCVD fashion of ridiculous situations, while lightly poking fun of his accent and lack of acting talent.  The second option was to play it all completely straight, up to and including JCVD speaking his lines in French, at least during the scenes on the Riviera.

It chose the worst option of all, by not going in either direction.  Maximum Risk is played straight, but not taken completely seriously.  JCVD could have pulled this off if the film makers had the balls to do it.  He should have spoken French in the scenes in France.  The first scene to feature JCVD as the police man is him at a funeral in which the priest is speaking in French.  A French detective arrives to tell JCVD about his brother.  For some reason they speak in English.  It makes absolutely no sense.  Showing JCVD speak in his native language would have raised this film on the serious scale.  He would have appeared more intellectual to English speaking audiences.

There is plenty of action and fights but not so much martial arts.  JCVD walks through much of the film bleeding or bruised.  Although the tone of the film is more serious than previous ones, it includes one over the top fight scene.  JCVD goes into a Russian bath house to speak to a mobster.  All the middle aged men have big towels wrapped around them, but not JCVD.  He found a little sexy towel to wear, to help make him seem less short.  He ends up getting into a fight with a muscular assassin also wearing a towel.  Unlike in Eastern Promises (2007) the towels stay on.  During the fight, we can clearly see that both men are wearing white briefs under their towels.

In 1996, JCVD's private life was not in a good place.  He was on his fourth doomed marriage.  He had begun using cocaine the previous year.  By 1996 it had become a reported $10,000 a week habit.  He entered rehab, but left after only one week.  He was also diagnosed to be bipolar.  All of this showed on his face.  His pretty boy looks were fading fast, giving him the look of a world weary man.   He often seems emotionally absent from the film.  I reiterate, that could have helped in making this a serious film.

I never saw Maximum Risk when it first came out and I probably would have disliked it then.  Scott and I used to watch JCVD's films just to make fun of them.  Other than the bath house scene, there is very little to make fun  of.  Watching it now I see a decent action film, that could have opened up a new type of film for Jean-Claude Van Damme, if he had been sober and the film makers would not have treated it like a "B" picture.